Brexit: and migrant workers in Devon

Whilst it is clear that one of the main themes was 'immigration' during the referendum debate
Opinion: Brexit will benefit all in South West, says Gisela Stuart | Plymouth Herald

Here's the view from the Devon Chamber of Commerce from earlier this month:

“Overseas workers are very important to the economy in the south west. 7% of the workforce comes from overseas and it is vital for key sectors; agriculture, care and hospitality in particular.

Skilled workers are sometimes hard to source locally and there is a need to recruit from overseas, the ability to do this must be protected if businesses are not to be disadvantaged through immigration regulation.
Businesses must be consulted if there are to be changes to immigration rules.
It is important that any introduction of a points based system includes the need to allow workers to come to support the economy.”

There is the care industry:
Warnings of nursing shortages across our region following Brexit | West Country - ITV News

There is the construction industry:
Brexit: Civil engineers call for 'flexible' immigration and procurement reform - The Transport Network

And there is the agriculture industry:
British strawberries could be wiped out by Brexit, farming leaders warn | UK news | The Guardian

Brits Vote Against Strawberries and Cream With Brexit Referendum 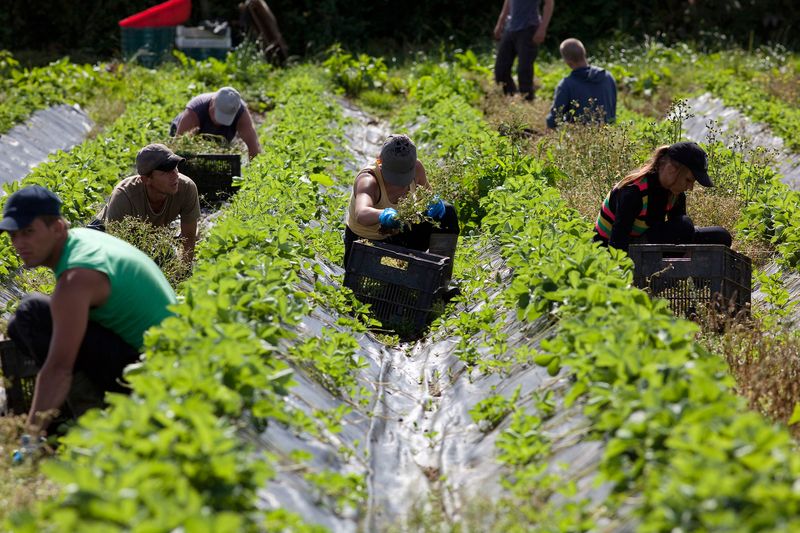 Workers pick strawberries in a field at a farm in Devon, U.K.
Photographer: Phil Clarke Hill/Corbis via Getty Images

It’s a sign of labor shortages in U.K. agriculture that the English family farm which has fed Wimbledon tennis crowds with strawberries for more than 20 years translates job listings on its website into Romanian and Bulgarian.

After Britain’s vote in June to leave the European Union, heightened by anger over levels of immigration, it also illustrates the risks ahead for an industry that has grown dependent on foreign workers.

Farm workers’ average hourly wages including those of managers were two-thirds the level for all U.K. industries, a survey published by Farmers Weekly in 2014 showed. In addition, much manual work is temporary, based on growing seasons. In 2013, the U.K. scrapped the Agricultural Wages Board for England and Wales that had regulated minimum pay rates and overtime.

The prospect of reduced access to workers after Brexit puts new Prime Minister Theresa May in a quandary, seeking to balance growers’ needs against demands from citizens who voted to leave the EU to cut immigration. Warning of swathes of closed businesses and wasted food if its 55,000 members can’t find staff, the National Farmers Union in July wrote to Brexit Secretary David Davis to raise its concerns.

Fruit and dairy farmers are most vulnerable because they rely on seasonal workers, said Duncan Fox, a Bloomberg Intelligence analyst. That’s even without the post-Brexit threat to 3 billion pounds of EU aid paid each year to British farmers.

Horticulture, which includes fruit and vegetables, is a major part of U.K. farming. It contributed about 3.7 billion pounds to the economy in 2014, just ahead of the country’s grain production for the year, according to government data cited by City University London Professor Tim Lang. That’s even as it took up just 3.5 percent of the nation’s agricultural land, compared with about two-thirds for the cereals crop.

The latest figures show cereals output sank to 2.9 billion pounds in 2015, as horticulture held steady. The Royal Horticultural Society has put the contribution to the economy from the broader sector, taking in businesses from plant nurseries to landscape gardening, at 9 billion pounds, employing 300,000 people.

Already hurting from weak milk prices, curbs on movement of labor from other countries could ravage the dairy industry, according to Mike King, owner of a farm in Gloucestershire in southwest England, five of whose eight staff are from abroad.

“We advertise in the U.K. and get nobody,” said King, also chairman of the Royal Association of British Dairy Farmers. “I couldn’t run my business without migrant labor. If we’re not careful, we could get ourselves into a situation where actually we force dairy farming out of the U.K.”

Costs have become more critical as discounting by the rival supermarket chains that buy their milk has pushed farmers into debt. The numbers of dairy producers in England and Wales has fallen by two-thirds in the past two decades, according to the Agriculture and Horticulture Development Board.

About a third of dairy farmers employed staff from outside the U.K., with 94 percent saying willingness to work was the main reason, while finding U.K. workers with the right skills was also tough, a 2014 survey of 250 producers by the RABDF showed.

“Price wars in the retail sector, where incumbents are being challenged by low-cost rivals, will feed through the supply chain and exert continuing pressure for farms to cut costs, including suppressing wages or employing fewer workers,” Stephen Devlin, natural-resources economist at the London-based New Economics Foundation, wrote in a report.

While the government is wary of public concerns over migrants, such stresses on farmers mean it may need to bring in temporary visas for low-wage, low-skilled workers. That’s less than three years after it abolished just such a system for Romanians and Bulgarians as controls on labor from those countries ended.

“Assuming that free movement does come to an end, then the government is going to have to make some decision on how much of the labor supply that’s been available from European countries will be replaced,” said Madeleine Sumption, director of Oxford University’s Migration Observatory. “If there’s any kind of low-wage or low-skilled work program, agriculture is the area where you’d be most likely to see it.”

It’s not just unskilled staff growers struggle to find. With an agricultural workforce largely made up of men over 55 years old, and a lack of home-grown talent studying agriculture, those with relevant experience and education have been in short supply.

More skilled horticulturalists have been coming out of colleges in Eastern Europe than in the U.K., said Berry Gardens’ Marston. That has meant the industry also turned to EU nationals to fill many of its full-time, long-term posts, he said. The RHS is among organizations that’s been promoting horticulture training in Britain after finding that 72 percent of businesses in the industry were unable to fill skilled vacancies.

“It has been a struggle to get suitable candidates for several years,” said Marion Regan, who runs Hugh Lowe Farms. “Thanks, at last, to more people studying commercial horticulture and agriculture in this country, we may in time find more U.K. citizens interested.”

Brits Vote Against Strawberries and Cream With Brexit Referendum - Bloomberg

Meanwhile:
"Why are you still here? We voted out so out you ****ing go!" Brexit race hate incidents in Cornwall | West Briton

And:
15 Common Arguments against Immigration, Addressed | Foundation for Economic Education

And finally:
Vote Leave leader 'hypocritical' for now calling for rights for Europeans in UK (From Mid Devon Star)
.
.
.
Posted by Jeremy Woodward at 01:00