Plans for Port Royal and the Eastern Town >>> >>> >>> "The needs of all these clubs and organisations remain paramount in any plans for the future development of our town."

A leaflet has been stimulating some debate on Streetlife:
Futures Forum: Plans for Port Royal and the Eastern Town >>> "People don't connect the Scoping Exercise with what is in the Local Plan"

The Herald has picked this up:

Storm over leaflet about future of Sidmouth seafront 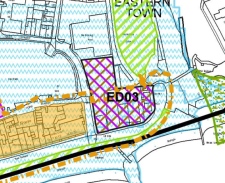 Claims in a leaflet that a ‘major redevelopment’ of Port Royal could see Sidmouth lose its lifeboat station, sailing club and Drill Hall have been denied by the area’s landowners.

The stretch is allocated for a ‘mixed-use’ redevelopment with 30 homes, plus commercial and recreational uses, in East Devon District Council’s (EDDC) Local Plan.

The authority is supporting a Sidmouth Town Council-led scoping exercise to identify boundaries, ownership, the needs of existing occupants and potential future uses.

Both councils this week slammed the contents of a leaflet, created by a local resident, as ‘inaccurate scaremongering’ – and damaging to the town’s reputation during FolkWeek.

The leaflet reads: “In the East Devon Local Plan, the area of Port Royal is identified for major redevelopment into mixed-use properties and housing. This will mean the loss of the lifeboat station, the sailing club and, of course, the Drill Hall. Most of the parking in the East Ham car park will also go, as will the toilets.”

Sidmouth Lifeboat operations manager Phil Shepperd said the crew will work with EDDC to ensure Port Royal’s redevelopment meets its needs - and those of the other organisations that are ‘critical’ to the town’s vitality and character. Citing two recent call-outs, he added: “While the building may change, the service itself is essential to the town’s future as a seaside destination and will remain.”

Sidmouth Sailing Club president Oliver Salter said there has been sailing in the town since the mid-1800s and a formal club for more than 80 years, so he hopes it will be part of the plans. He added: “We are, however, naturally concerned for the future and apart from [a] very recent meeting, we have never been consulted on any of the council’s plans or aspirations.”

The leaflet refers to the Sidmouth Drill Hall Hub CIC website, but director Matt Booth said: “We were not behind the flyer and did not know about it. It is unfortunate that aspects of it would appear to be misleading. We have campaigned for some time for a proper open discussion to be had about Port Royal and are very pleased that will now be happening. We strongly urge all of the community to seize the opportunity to participate in that and have a say in the future of a vital and long-neglected part of Sidmouth.”

An EDDC spokeswoman, also speaking on behalf of Sidmouth Town Council, said: “East Devon’s recently adopted Local Plan allows for Port Royal to include up to 30 residential units, as well as a mixture of other uses.  “This will of course be factored into the scoping exercise, which is the first stage of a potentially lengthy planning process for regeneration and economic development of this vital area of the town. The full terms of reference of the scoping study have yet to be finalised and agreed by Sidmouth Town Council.”

Sidmouth Town Council chairman Jeff Turner said: “The needs of all these clubs and organisations and those of the many social, community and sports groups in the Sid Valley remain paramount in any plans for the future development of our town.”

EDDC leader Cllr Paul Diviani added: “It is disappointing when such careful commitment is in danger of being undermined by inaccurate scaremongering. I hope that the people of Sidmouth and the town’s many visitors who may have read this leaflet during FolkWeek will disregard its unreliable contents. We look forward to commencing the scoping exercises this autumn, when key organisations and the public will be able to have their say.”

Meanwhile, the chair of the District Council, Cllr Stuart Hughes, has provided this contribution to the Streetlife thread:

Sidmouth Town Council and East Devon District Council are working together in consultation with key local organisations to work out the best future for Sidmouth’s Port Royal and Eastern Town areas, which are widely acknowledged as significantly less attractive than the rest of the town.

“The two councils have been at pains to engage the organisations that matter in order to reflect the keen interest of the community in the regeneration of Port Royal and Eastern Town. Through proper council reporting and media communications we have made clear our shared intent to take forward a professional and successful renewal of Port Royal that meets the town’s expectations.

“Both authorities are therefore extremely disappointed to hear that an inaccurate and inflammatory leaflet has been circulated during Folk Week - one of the most important weeks of the year for Sidmouth’s wider reputation.

“Back in January 2016, the district council presented a report to Cabinet, who approved the council’s contribution to a shared scoping exercise for Port Royal. In that report we said:

“Some uses will wish to remain and need to be close to the sea and others are not so important. For example, maritime uses such as the lifeboat station and sailing club are important assets to the town and part of the seafront’s attractions.”

“Strategy 26 in East Devon’s recently adopted Local Plan allows for Port Royal to include up to 30 residential units, as well as a mixture of other uses. This will of course be factored into the scoping exercise, which is the first stage of a potentially lengthy planning process for regeneration and economic development of this vital area of the town. The full terms of reference of the scoping study have yet to be finalised and agreed by Sidmouth Town Council. The present users of Port Royal area will be involved throughout the study and their needs and future will be taken into account during the study; there will also be an opportunity for the Sid Valley public to get involved and to give their views on how this sensitive and vital area of Sidmouth should be redeveloped. The information and findings of the scoping study will also be used to provide evidence for the ongoing neighbourhood plan.