Brexit: and the price of fish

The fishing industry has done well - and hopes to do better - out of Brexit:

"Things are looking pretty positive for the short-term. Prices have been very good and Brixham's fishing industry has had some record-breaking weeks."

Futures Forum: Brexit: and 'looking to get increases in fishing quotas'

Although the longer-term prognosis might not be too rosy:
Futures Forum: Brexit: and betraying the UK's fishing industry

If 'prices have been very good' - it means that the consumer is paying more - and not just more for UK-caught fish:


Brexit, the pound and the price of fish 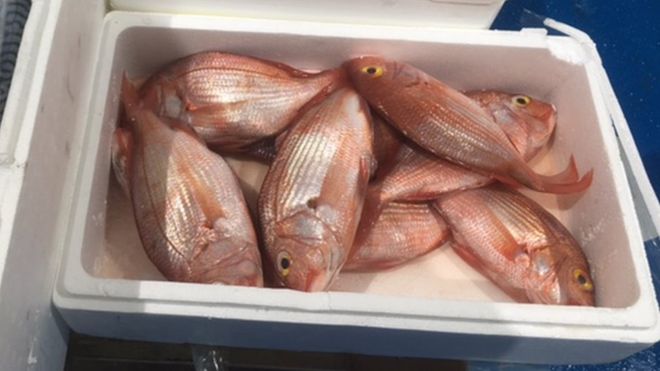 Traders at one of the UK's largest wholesale markets say prices for imports from the EU are up by as much as 40% owing to the drop in the value of the pound.

Sterling has fallen sharply against the euro since the Brexit vote in June. It means fresh fruit, vegetables, fish, meat and poultry are costing more for traders to buy.

The UK economy has defied some of the gloomiest predictions since the EU referendum. But with many businesses working out what the weaker pound means for them, BBC Radio 4's You and Yours programme spoke to traders in New Smithfield Market in Manchester for their views.

Tony Howard is a salesman for Barton and Redman Ltd, a large independent fruit and vegetable wholesaler at the market. He says tomatoes from the Netherlands have gone up sharply. "Before Brexit the average price of a box of tomatoes was around £4 and now it is around £6," he says.

He sells on to caterers, hotel and restaurant owners and secondary wholesalers. "We try to work for a gross profit of around 10%, so if I am paying £6 for a tomato [box] I have to charge £6.60 for it," he says. "Secondary wholesalers and catering people have to work for a larger margin because they don't do the volume that we do, so by the time it gets to somebody's plate that box of tomatoes could cost £10." There were times before the UK voted to leave the EU when he could buy tomatoes from the Netherlands for £2, he says.

BBC Radio 4's You and Yours spoke to several traders with similar stories - reporting price hikes of up to 40%.

Brian Wilde is from J&B Wilde which has been selling fish, meat and poultry for more than a century. "It is very difficult, because we buy quite a lot of produce out of the UK," he says.

While imports are more expensive, of course the pound's fall also makes UK exports cheaper. But that also makes sourcing produce harder as well, says Brian. "Produce in the UK is getting sent abroad because it's worth more for those fishing for the fish to send it abroad."

His sister, Mariella, says: "All our prices, for anything from outside this country, have gone up. Our average profits have fallen by up to 15%. We cannot pass that on."

Traders say they try to absorb as much of this extra cost as they can but that might change soon.

Darryl Laycock, from Sale Fish and Seafood in south Manchester, says the price of his sea bass has gone up 10%. "I haven't passed it on yet, but I think the margins are getting so tight, I am going to have to start looking at different prices on certain products," he says.

Traders suggest this could also affect the availability of products.

Matthew Tunaley, who runs a greengrocers at Failsworth in Manchester, says he does not buy strawberries at New Smithfield Market because they are asking for £5 for 500g. He believes it is because of a shortage, made worse by the exchange rate. "I have had a lady in already asking for them, I explained to her the price was too high, but she still wanted them," he says.


Brexit, the pound and the price of fish - BBC News

That staple of British tea-time is produced in Bremerhaven:
Brexit and the price of fish fingers | Business | The Times & The Sunday Times