‘How can someone with no facts be wrong’?

We are living in an era of 'post-truth' or 'post-fact' politics:
Futures Forum: Brexit: and post-fact politics

When 'evidence' is not the point:
Futures Forum: The Importance of Asking for Evidence >>> Sat 8th Oct @ the Sidmouth Science Festival

On this evening's Verb on Radio 3:

Are we really living in a Post Factual world? Ian McMillan investigates with Rob Colls, Joel Stickley and Bohdan Piasecki.

Rob Colls is Professor of Cultural History at De Montfort University Leicester. Rob recently visited America and with the idea of the ‘post-factual’ in mind he reports back from a country in the midst of election fever. Rob describes a contest where the candidates appear to be playing different language games, and asks the question ‘how can someone with no facts be wrong’?

Joel Stickley: The Lincolnshire Poet Laureate has written a brand new story for the ‘Post-Factual’ Verb, about a grown man and his imaginary dog. He explores the ways in which social media offers new ways to present fantasy as truth. Following the post-fact from the political to the personal, Joel explains that he surprised even himself with a sad ending. Joel Stickley

The comedian and theatre maker Bob Slayer produced ‘Iraq Out & Loud’, a compete reading of the Chilcot report, undertaken by six people at a time in a shed at this year’s Edinburgh Fringe. Bob tells Ian about the surprising variety of emotional responses evoked by reading the report and the way in which this event was able to give this 12 volume tour de force of factual language back to the people. Iraq Out & Loud 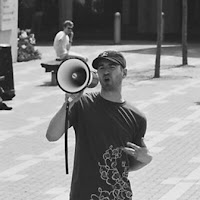 Bodhan Piasecki is the latest poet to tackle our ‘Three Score and Ten’ commission. In his poem sequence ‘A Good Understanding of Life’ he contrasts the often impersonal language of the UK Citizenship handbook with his own experiences of living in the UK, and the personal experience of becoming a father here. Bodhan Piasecki here