Making your own energy and not relying on energy companies is huge in many parts of the world.

It can be done on a community basis:
Futures Forum: "In most other countries, renewable energy projects are owned by local communities: and so there's a huge groundswell of support for them."
Futures Forum: Local energy can be very profitable: "Seizing the opportunity of decentralised energy generation can provide new income streams for communities and councils."

And it can be done on an individual basis:
Futures Forum: Going off-grid

In Germany they call it the 'Energiewende':
Futures Forum: “Energiewende” – energy transformation... reducing dependence on fossil fuels and changing the role of the large traditional utilities.

It is being incredibly disruptive:
Futures Forum: Renewables are proving too successful in Germany...
Futures Forum: The Energiewende: How the supplier is becoming obsolete. ... or: How Germany's sustainable energy transformation is disrupting the utilities industry.

The problem is that it is particularly disruptive to the profits of the large energy providers:
Futures Forum: "Community energy offers a long-lasting solution that protects against ‘big six’ price rises and pumps money back into local areas.”

Which is why in the Unites States many states have banned going off-grid:
Is Living Off the Grid now a Crime?
States With Laws (and What They Are) About Living Off The Grid
Using "Cleansing" Rhetoric, Florida Makes Off-Grid Living Illegal | OCCUPY WALL STREET
'Camping' on Your Own Land is Now Illegal -- Govt Waging War on Off-Grid Living

Between the survivalists and hippies, the Telegraph has been following Ben Fogle's ventures over the years:
Ben Fogle meets people who left the modern world behind - Telegraph

His series has been the most popular on Channel Five:
Ben Fogle: New Lives In The Wild - Channel 5

The latest series has just finished:


The adventurer meets a former punk who found peace in the wilderness. 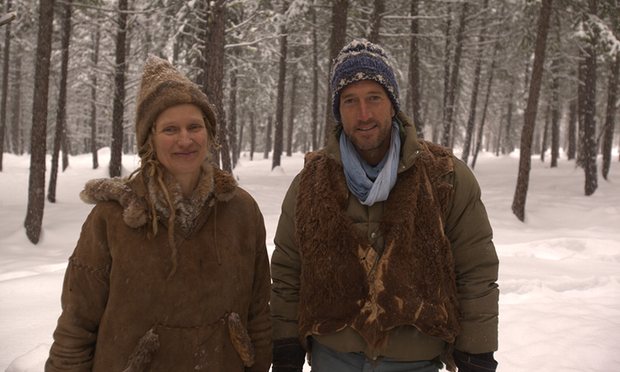 
Returning for a fifth series, Ben Fogle’s New Lives in the Wild (Channel 5) sends the intrepid Fogle to the back of beyond to meet more people who have chosen to go off grid for good. When the show debuted, it immediately put itself in consideration for the distinction of being Channel 5’s Most Thoughtful Programme. The competition has not stiffened in the intervening years.
After a five-hour drive from Seattle, a kilometre walk and a horseback ride of indeterminate length, Fogle finally discovers Lynx Vilden, a half-British, half-Swedish wild woman, who lives alone in the snow-upholstered North Cascades, at one with nature.
“Everybody’s trying to eat every- body else,” she says, “so it’s just a matter of trying to fit into that cycle.”
Vilden found peace in the wilderness after a troubled period as an Amsterdam punk, and her vocation is stone-age living: she sleeps in an earthen hut in sub-zero temperatures, and she’s currently experimenting with surviving the winter without recourse to metal tools – just bone, stone, wood and skin. She has students who come to the woods to learn survival skills from her, but mostly she’s alone.
Immediately, I begin to fear for Ben’s safety. He’s no stranger to hardship, but people don’t always drop out of society for rational or commendable reasons, and isolation can make them weird. Fogle has, by his own admission, met a lot of doomsday preppers in his line of work – people you wouldn’t want to cross, although it might actually be worse if they took a particular shine to you. Thanks for having me, you’d say, but I really must be getting back to civilisation. Then you’d hike miles through the snow to the burnt-out shell of your hire car.
As busy as she is with arrow-making and bear-fat rendering, Lynx clearly craves company. A segment about her relationship status provided an opportunity she was not going to let pass.“Is there a caveman out there?” she says, turning to the camera. “He’s strong, handsome, sensitive, spiritual, and a little bit savage. If you know him– cos he probably isn’t watching this – go tell him I’m waiting.”
Prospective cavemen might also like to know that Lynx has a perfectly comfy cabin on her property, complete with wood stove, electricity and satellite dish. She forsakes it for all but the most unforgiving weeks of winter, but it’s where her daughter – a 22-year-old international studies student – sleeps when she comes to stay.
In the interests of full disclosure, Vilden also possesses what Fogle describes as a “unique odour”. It’s too bad the trademark for Lynx is already taken. The subject of bathing must have come up, because Vilden leads Fogle down to the river, where she has a big cauldron of water heating over an open fire. She refers to it – twice – as her cannibal pot.
“Can I just say,” says Fogle as they sit together in the steaming bath, “I really thought you were going to eat me.” “The evening is not over,” says Vilden. Fogle laughs as if his life depends on it.
Fogle has a natural, guarded patience with strange and sometimes selfish people, and, of all the dropouts he has met in the past three years, Vilden has to be one of the most intriguing: intelligent, engaging, funny and largely unmarked by the weirdness isolation brings. “If the world was to end,” says Fogle, “I think I’d want to be with Lynx more than anyone else.” Careful, Ben – she might hold you to that.