Beavers are being reintroduced to Cornwall:
Futures Forum: Reintroducing beavers to Cornwall - to mitigate flooding - to filter water - to enhance biodiversity

They've now been well-established for some time in Devon:
Futures Forum: On the River Otter: Beaver Trial awarded the ‘Wildlife Success Story of the Year’

Bret Westwood has popped down to the River Otter to see: 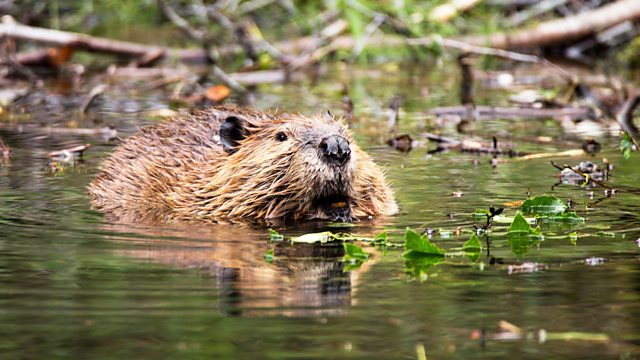 Beavers are back in the UK, hundreds of years since they last lived among us.
Brett Westwood asks if we can recover our cultural links with these architectural animals, as well as remember how to live with thechanges they bring to the landscape.
Nature writer Jim Crumley talks about their green engineering skills and writer Rachel Poliquin brings the Canadian perspective on what she calls the four great human romances with the beaver: with its castoreum, its musk, its architectural skills and its ecological abilities.
With readings by Lia Williams of extracts from Castorologia and Winter by Geoffrey Ursell, and The Beaver by Vernon Watkins.

Rachel Poliquin is a Vancouver based writer concerned with all things orderly and disorderly in the natural world.
Her book Beaver was published by Reaktion in 2015.

Jim Crumley is a nature writer, journalist and poet. His book Nature's Architect: The Beaver's Return to Our Wild Landscapes, was published by Saraband in 2015.
He is a passionate advocate of species reintroductions, especially of wolf and beaver, the widespread restoration and expansion of native habitats, and a radical reappraisal of the relationship between the people of Scotland and the land. He writes columns for the Scots Magazine and The Courier and now lives in Stirling.

Stephen Hussey and Jake Chant of The Devon Wildlife Trust

The Devon Wildlife Trust is home to England’s only known wild beaver population on the River Otter in East Devon.