And now we have beavers being reintroduced to Cornwall - with great effect, as reported on this evening's AutumnWatch:


Posted at20:43
Across some parts of the UK, beavers are becoming a more familiar sight. Their reintroduction is being trialled in efforts to manage our rivers more effectively. But did you know...
Posted at20:41

Lily Moffatt
Autumnwatch Digital Assistant
In June 2017, the Cornwall Beaver Project, which is working closely with the Cornwall Wildlife Trust, Woodland Valley Farm and the University of Exeter, reintroduced two adult beavers - a male and a female - to a private farm in Ladcock, Cornwall.
Ladcock is a small village that has been subject to extensive flooding in recent years - with this in mind, the beavers that have been reintroduced are thought to act as a natural flood defence system by changing the sculpture of the landscape.
Incredibly, just two nights after the reintroduction, the beavers began building a dam - and within the first two weeks, the beaver dams had retained over 1,000 cubic metres of water! As time goes on, these dams have been extended and new ones constructed. There are now five beaver made dams on site at Ladcock
Beavers were once endemic to the UK, but 400 years ago they were hunted to extinction for their meat, scent glands and fur.
The loss of this clever eco-engineer to the UK caused the collapse of many intricate ecosystems and landscapes, including lakes, mires, tarns and bogs. For centuries, settlements across the UK have been feeling the negative effects associated with the loss of such a vital keystone species. However, within the last eight years, efforts have been made across the UK to reintroduce the once native beaver back to its former range 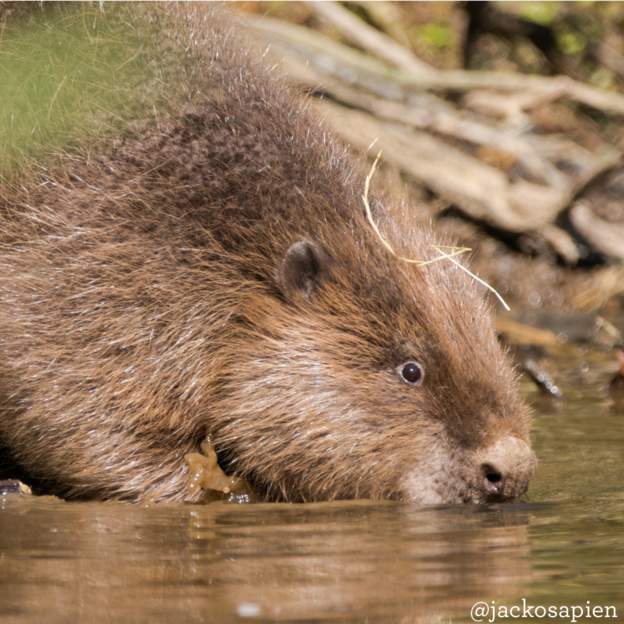 Adult beaver reintroduced to Ladcock. Image credit: @jackosapien
Why have they been reintroduced to Ladcock?Areas of Cornwall have been badly affected by adverse flooding over the years. People have been displaced from their homes, infrastructure destroyed and a huge amount of damage caused by the excess water into the area. This new beaver reintroduction scheme is thought to help mitigate this growing issue for areas that are most at risk of flooding.
For Ladcock, beavers' dam building and water channel digging behaviour may enable land close to flood risk areas to hold more water, so when heavy rainfall hits water will be retained. Ultimately, this slows the movement of water downstream and into areas that are at risk. The dams also act as a giant filter, trapping pollutants and sediment within the ponds, meaning that water is cleaner.
Beaver ponds also enhance the biodiversity in the area, attracting many new species including reptiles, amphibians, mammals and birds. These ponds become a hub for wildlife, enhancing and improving local ecosystems.
Beaver reintroduction programmes across the UK are growing in popularity. Beavers have been reintroduced back into Scotland, Devon, Cornwall and hopefully soon, Wales.
How you can get involved!See if you can spot a glimpse of a beaver by attending a public beaver watch provided by the Cornwall Beaver Project. You can book (between spring to autumn) and get the exciting opportunity to observe the beaver dams until dusk and spot one of its elusive residents. To find out more information, please visit http://www.cornwallwildlife.org.uk/beaverproject