The issue is never out of the news it seems:
Theresa May speech: What's the problem with affordable housing? - BBC News
Dozens of councils fail to replace a single home sold off under Tories' right to buy - Mirror Online

And the notion of public housing has never been so popular:
New Social Housing More Popular With Public Than Private Homes, Research Reveals | HuffPost UK

'As well as lower rent, it has given tenants greater stability':
'Not everyone can afford a mortgage' - BBC News

4
Paul Karakusevic
When I was a student in the early 1990s, discovering the work of architect Neave Brown was revelatory. At a time when council housing and domestic architecture was at a low ebb, his housing estates, such as the Alexandra Road estate for the London Borough of Camden, designed in the 1970s, were beacons of hope.
Brown’s estates were robust reminders of the dramatic progress public housing in the UK had made over the course of the 20th century. Barely 100 years since Charles Booth shone a light on the living conditions of the most needy in London, Brown and his team built on the progressive traditions of public housing in the UK to create some of the best, most innovative homes this country has ever seen. 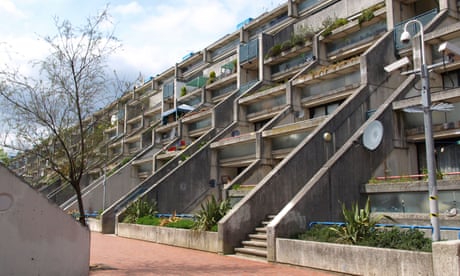 'I'm dumbfounded!' … Neave Brown on bagging an award for the building that killed his career

Read more
This month, Brown received the RIBA royal gold medal in recognition of a lifetime’s contribution to advancing architecture. This is the UK’s highest honour for architecture and for it to be awarded to a figure like him matters hugely. He has no ego and his buildings are no swaggering monoliths. Brown is a humble, but hugely intelligent chap and his courageous buildings are the result of his quiet, but gritted determination to carve out a new direction for modern architecture and housing design, that put quality above all else. The award therefore is a timely reminder of those qualities and the scale of our ambitious for everyday housing in the 1960s-70s.
At Camden, Brown was part of a young and ambitious architects’ department that wanted to do housing differently. They were opposed to tower blocks and slab blocks and the kind of generic housing estate architecture thrown up across the UK, and they pushed hard against cheap, contractor-led system building techniques, whose faults and shortcomings were there to be seen, even in the 60s. Instead Brown invested in creating a new humanism where low-rise, medium- to high-density housing layouts responded to the characteristics of north London to create new neighbourhoods and people-focused domestic space.
At his scheme at Dunboyne Road, completed in 1975, spacious homes are arranged in stepped terraces huddled among a landscape of trees and gardens. At Alexandra Road, completed in 1978, he scaled up this concept into one of London’s most ambitious public housing statements with two mighty terraces providing 500 homes, shops, workshops, a community centre, schools and a public park.
While its sheer scale is undeniable, this is also an incredibly human and open environment full of spaces for residents to meet, talk, lounge, play and linger and for visitors to wander through. People who live there absolutely love it. One I spoke to recently told me it wasan “extraordinary privilege” to live in such an extraordinary home full of endless clever and beautiful details.
I believe we are on the cusp of again creating public architecture that can start to lay claim to the mantle of those conceived by Brown and his Camden colleagues.
Projects like Alexandra Road were not abstract architectural concepts plucked from the avant garde; they were housing schemes designed for ordinary, middle- to low-income families and part of a long British architectural tradition that started with the philanthropists of the 1860s, were fine-tuned by the London county council and diversified by boroughs and tenant groups, but that were wilfully cut down by opportunist politicians and the Thatcher government.
If we are ever to see projects of the same quality and ambition again, we need to reach back into our own history and support local authorities to build the housing they need. This doesn’t mean simply throwing occasional grant funding at them. It means building them back up as clients and as leaders so that they again have the confidence to innovate and deliver housing with flair and imagination.
Paul Karakusevic is founder of Karakusevic Carson Architects

The architect who reminds us council housing can be beautiful | Paul Karakusevic | Housing Network | The Guardian
.
.
.
Posted by Jeremy Woodward at 15:03