'Help to buy' is not actually about making housing more affordable:
Inside Housing - Comment - Balance of funding has been shifted further away from affordable housing

It's not about helping out other schemes either:
As the Government extends 'Help to Buy', what's happened to shared ownership? - Telegraph

In fact, it's not about very much:
'Oxford is just as expensive as London': how Help to Buy fails homebuyers – and the market

Other than subsidising the house-building industry massively:
May's help-to-buy extension is another boon for housebuilders | Nils Pratley | Business | The Guardian 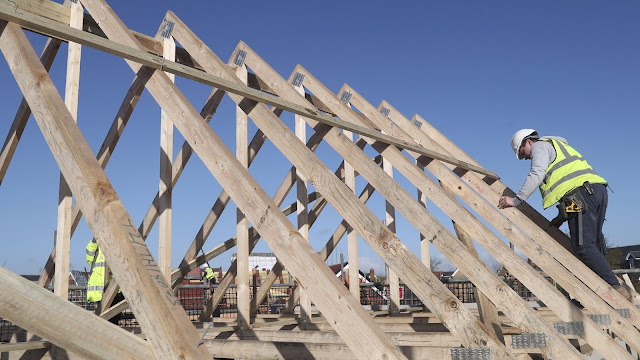 by Aime Williams
The UK’s biggest housebuilders added £1bn to their market value on Monday after the government promised to funnel more money into subsidies for housebuyers.
Prime minister Theresa May announced a further £10bn of funding for the government’s “Help to Buy” loan scheme at the start of the annual Conservative party conference on Sunday. The scheme, which is due to end in 2021, allows people to buy a new home with a deposit worth only 5 per cent of the cost and a low-interest equity loan from the government.
Shares across the sector rose 2.6 per cent on average on Monday, with the largest rises at the three biggest housebuilders. Barratt, the UK’s largest housebuilder, rose 3.6 per cent in morning trading, Persimmon rose 3.4 per cent and Taylor Wimpey was up 2 per cent. All three are FTSE 100-listed.
Help to Buy adds £1bn to housebuilder valuations - Financial Times

Which means that this particular policy is not going down very well:

Plans to pump more money into the Government's Help to Buy scheme has not been well received, according to a new poll.

The Government's decision to pump an additional £10 billion into the Help to Buy scheme has not gone down well with the public, a new poll suggests.

Last week, Prime Minister Theresa May said the move would help a further 135,000 people onto the property ladder.
And while you might think that would announcement would be broadly welcomed, a poll by personal finance website loveMONEY found that almost nine in 10 (88%) people were opposed to the move.
Here's why.
Read more: is it time to scrap Help to Buy once and for all?

As has been written many, many times before, the problem with Britain's housing market is not down to a lack of demand, but of supply.
There are simply not enough homes being built, so handing more money to struggling would-be buyers through Help to Buy only serves to prop up already-inflated house prices.
As loveMONEY writer Felicity Hannah highlighted in her brilliant opinion piece last week, “the current system is merely lining the homebuilder’s pockets, enriching existing homeowners by boosting their property values and doing nothing for the housing security of poorer households. Extending [Help to Buy] makes no sense and I can’t understand why the Tories can’t see that."
She also claimed that the best way to help is to build more social and affordable housing.
“If we boost supply then that will ease demand and prices will stop rising – in fact, they may even fall. More renters will be able to secure social housing, and enjoy the stability and security that everyone deserves.”
It’s a powerful argument – and one which many people seem to agree with, if this latest poll is to be believed.