An agreement between the developer and the District Council on 'overage' has been revealed - although a definition of 'overage' might be handy:

In the context of land sales, an overage (also called “claw back”) is used to describe a sum of money in addition to the original sale price which a seller of land may be entitled to receive following completion if and when the buyer complies with agreed conditions.

Overage is often written into a contract of sale where land or property is being sold at an undervalued rate...

In other words, if PegasusLife make more money on the sale of their flats than originally anticipated, then the District Council should have slice of that...

The problem is that what was 'written into the contract of sale' was not very promising - as revealed at the beginning of this year:

Pegasus were not prepared to offer significant ‘overage’ – meaning that EDDC would not be able to ‘claw back’ any excess profits Pegasus might make.

Had the Full Council been aware of the terms of the deal with Pegasus – for example, no significant overage – then then their approval of Pegasus as the ‘preferred developer’ might not have been forthcoming.

Other commentators have pointed out the uselessness of this 'overage clause':

A Section 106 Agreement between Pegasus Life and East Devon District Council was published. This shows that the land being considered for development is valued at £5.8 m. Pegasus Life has submitted viability evidence to demonstrate that this scheme would not be viable if it were to provide affordable housing, which the Council has accepted.

An “overage clause” has been included where a contribution would be paid if the scheme was more profitable than the forecasted figures. In practice this rarely yields any significant contribution.

Futures Forum: Knowle relocation project: PegasusLife appeal inquiry >>> "the Sidmouth community have been badly treated and let down" >>> a summary of the issues

A letter in the latest Herald makes the same point:

Overage - or no overage?

So, East Devon District Council, desperate to recoup cash for their over-budget office re-location project, have once again allowed PegasusLife to run rings round them, as they seemed to do with their so-called “defence” at the recent Knowle appeal inquiry. The appeal contest was supposed to be between EDDC defending their refusal and Pegasuslife the appellant but to many observers it turned out to be between both of these on the one hand and the Sidmouth community on the other.

EDDC have also entered into an agreement with PegasusLife for the latter to pay “overage” on profits from its 113-apartments development. I understand that any “overage” (i.e. money a seller of land may receive on a developer's profits) is dependent upon the sale of the final PegasusLife apartment:

But what chance is there that EDDC will ever know what profits PegasusLife will make?

And what if PegasusLife deliberately fails to sell the last apartment(s)?

And haven't EDDC agreed a “viability” clause with PegasusLife so that “overage” is unlikely to happen or be significant?

And would any overage payments compensate for the £3.5 million that this high-end retirement complex ought to be paying towards the “affordable” housing the district so urgently needs?

In fact, this has been a concern for some time:
Futures Forum: Knowle relocation project: deciding to sell >>> 'overage' and the dangers of selling Knowle short >>> one year on (April 2016)

The latest calculations from a correspondent show what attractive profits the developer could be making:

Sidmouth property has a local median price of £412k and, if we take into account other PegasusLife developments around the country, the two-bedroom Knowle flats would expect to fetch £660-825k and the one-bedroom flats £490k - giving an expected income from sales of £70million.

If the comparable data from the Churchill Viability Report for their Green Close development is applied (see below), the costs and likely profit for PegasusLife at Knowle can be estimated:

"The industry expectation is a 20% profit for PegasusLife which is £14,000,000, that leaves £1,735,000 for affordable housing.
"Do remember, the estimated costs will be set at maximums and so there should be quite a windfall for East Devon tax payers at stake if PegasusLife get away with a C2 categorisation."

The offer from PegasusLife is rather misleading therefore, as this piece from the Herald last week reported: 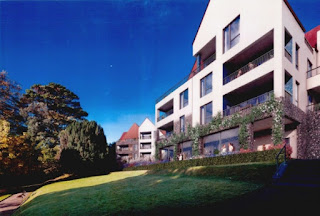 PegasusLife's plans for Knowle. EDDC planning officers voiced concerns about development onto the terraces and the impact on the listed summerhouse

The developer behind plans for a 113-home retirement community at Knowle will only pay towards ‘affordable’ housing if its profits exceed current expectations.

PegasusLife had argued its proposals should be classed under ‘residential institutions’ – branded ‘C2’ in planning terms – meaning it would not need to make a contribution. Landowner East Devon District Council (EDDC) had contested it should be classed as C3 for housing, meaning there would normally be a payment towards off-site affordable housing.

An agreement between the parties, revealed last week, shows there is an ‘overage’ clause, so PegasusLife would only pay out if the scheme exceeds its forecasts.

An EDDC spokeswoman said: “PegasusLife has submitted viability evidence to demonstrate that the scheme would not be viable if it were to provide affordable housing, which the council has accepted.

“The council has had this information independently assessed by specialists in development viability who have confirmed that the development cannot afford to meet the council’s policy requirements for affordable housing.

“Accordingly, the council has required an overage clause to be included within the section 106 agreement, which will seek to obtain a contribution towards affordable housing in the event that the scheme is more profitable than currently envisaged. This approach has been used before and supported by planning inspectors at appeal. If the development is found to be C2 by the inspector then there would be no affordable housing required to be provided.

“However, the Knowle inquiry is still ongoing and is timetabled to conclude today (Tuesday). We anticipate receiving a final decision from the inspector in January.”

The section 106 agreement shows that the land is valued at £5.8million. The deal with PegasusLife is worth £7.5million to EDDC, which will put the cash towards its £10million relocation to Exmouth and Honiton.

The dispute about whether the development should be classed as C2 or C3, as well as concerns about overdevelopment and the impact on the site’s listed summerhouse, led councillors to refuse planning permission last December. The developer took its appeal to the Planning Inspectorate. The inspector, Michael Boniface, is set to make a site visit this afternoon to inform his decision.

Although it is understood that the developer there has appealed yet again...
Drakes Avenue | Churchill Retirement Homes in Devon
Inspector throws out appeal to demolish care home for sheltered housing apartments - Devon Live

And so we are back to the slippery notion of 'viability':
Futures Forum: A solution to our housing problems: scrap viability assessments

Meanwhile elsewhere, PegasusLife have had problems with 'overage' and 'viability':
Futures Forum: Knowle relocation project: PegausLife application to pull down century-old hotel refused > in the New Forest
.
.
.
Posted by Jeremy Woodward at 07:09