Which has been happening in the Sid Valley:
Futures Forum: Place-making and getting a sense of place
Futures Forum: Sid Valley Neighbourhood Plan event >>> getting people of different views and persuasions around the table

And it's been happening between Oxford and Cambridge: 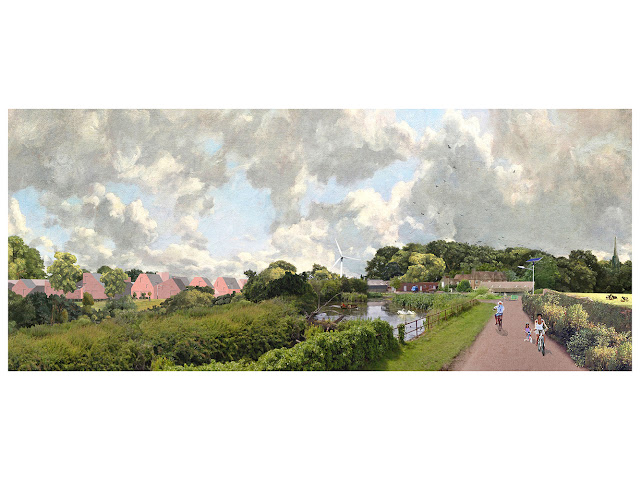 An all-women team made up of architects, designers and engineers has won an international contest for ideas to boost sustainable development within the UK’s Cambridge-to-Oxford growth corridor
Led by Jennifer Ross from Tibbalds, the winning ‘VeloCity’ team met during a series of women’s cycling events and includes Sarah Featherstone of Featherstone Young, Kay Hughes from Khaa, Petra Marko of Marko and Placemakers, Annalie Riches of Mikhail Riches, and Judith Sykes from Expedition Engineering.
Their winning scheme was chosen for its ‘person-centred scale’ promising to retain the existing character of the area while delivering generously-sized common land at the heart of each development, integrated public transport connections with expanded pedestrian and cycle routes, and encouraging small-scale construction and local utility networks.
The two-stage anonymous competition, organised by Malcolm Reading Consultants, sought ‘forward-thinking and imaginative’ proposals which place sustainable placemaking at centre stage in the area’s future and received 58 entries.
The project is backed by the government’s National Infrastructure Commission (NIC), and aims to boost the development of new housing, public realm and infrastructure within a 210km-long linear route taking in Cambridge, Milton Keynes, Northampton and Oxford.
Other finalist proposals included a new National Park by Barton Willmore; an archipelago of linked, distinctive and compact places by Fletcher Priest Architects; and a series of ecologically rich urban campuses by Mae.
Jennifer Ross, VeloCity team leader, said: ‘We’re absolutely thrilled to win. The six of us met taking part in women’s cycling events and became friends through a shared interest in designing places that put the pedestrian and cyclist first.
‘We wanted to work together and the competition was the perfect opportunity. We spent a lot of time discussing density and place-making and how the implementation of new public transport infrastructure can change the way we plan for and think about building successful communities.’