Housing in the West Country: Grockles vs the locals

From the Observer this week: 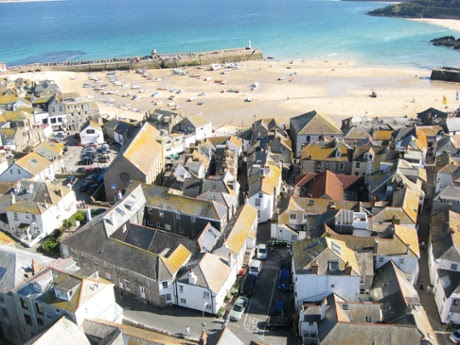 Age: The term was popularised in the Michael Winner film The System, so about 50.

Like me? I’m fairly certain I’m not a grockle. Really? Remember that time you went to Cornwall on holiday?

After watching that delightful Rick Stein series on BBC2, yes. And remember how you kept going back there year after year?

Well, it’s a wonderful place to be, a world away from the hustle and bustle of the city. And remember when you bought a second home there, despite the fact that it was empty for most of the year, and you found yourself being treated with hostility by the locals whenever you visited?

Well, actually, now you come to mention it … Be quiet, grockle.

What? I’ll have you know I’m nothing of the sort. You are. A grockle is a West Country pejorative term for a second-home out-of-towner like you, and there are now so many of you that new families in St Ives can’t afford to live there any more.

But … I said be quiet, grockle. St Ives, along with neighbouring towns, is now trying to restrict property purchases to primary residence only, and it’s all because rich, big-city idiots like you keep swanning in and outbidding people who actually live there.

Hang on a … No, grockle. This is a serious issue. Almost a quarter of the homes in St Ives lie empty for most of the year. Cornwall is ridiculously deprived as it is, so think of the knock-on effect that all those empty homes have on the local economy. It’s incredibly irresponsible of you.

But … What, you don’t think that communities deserve control of their own development, is that it? You think that getting the sleeper train down specifically to idly Instagram the produce at the Guildhall farmers’ market once a year helps the people of Cornwall one iota, do you?

“Grockle” is what they call second-home out-of-towners in Devon. My second home is in Cornwall. We’re called “Emmets” there. Emmets? But that isn’t nearly as much fun to say.

I know. Emmets win again! I’m not entirely sure that was the point I was trying to make.

Do say: “I’ve seen the error of my ways. Buying a mostly vacant second home in Cornwall was a selfish and irresponsible thing to do.”

A piece from the Western Morning News this week considered the theme with gusto:

A revolution is brewing in some of the Westcountry’s holiday hotspots where residents who fear their communities are being engulfed by second homes are proclaiming that enough is enough.

St Ives, the famously pretty artists’ colony in West Cornwall, could be the first town to ban new second homes

being built and is not the only seaside resort seeking to draw a line in the sand.

At Lynton and Lynmouth, on the North Devon coast, concerns have been voiced that second homes, which make up 60 per cent of housing stock, mean local people have no chance of taking a step onto the housing ladder.

Meanwhile, in upmarket Salcombe, in South Devon, where the average house costs more than £600,000, there are worries a “feeding frenzy” of ultra-modern developments is destroying the traditional port.

St Ives MP Andrew George said second home owners frequently did not make a fair contribution to the economy while their presence drove prices far out of the reach of local people. “Second and investment home ownership is having a devastating impact on communities like St Ives,” he said. It is estimated that more than 2.3 million people in England and Wales have a second address they use for more than 30 days a year, with Cornwall the most popular location for holiday homes.

In St Ives, the draft of the Neighbourhood Development Plan, which is soon to be distributed to households, states that all new construction should be for primary residence only rather than holiday purposes
It also calls for at least 50 per cent of new builds to be designated affordable housing.

Lucy Davis, neighbourhood plan co-ordinator, said: “There are other places in Cornwall trying for (primary residence), which have similar problems to us with second homes. Around 25 per cent of our housing stock in the parish are second homes, that is unsustainable.” Ms Davis said it was “unprecedented,” adding, “it will only apply to new builds but what it will do is stop the development bonanza that is happening because suddenly it won’t be so profitable.”

Tony Meakin, the Mayor of Lynton and Lynmouth, said visitors were crucial to the town’s economy and would always be welcome, but it was a fact that second homes were not always popular. “In Lynmouth 60 per cent of the properties are second homes and what we find is that it has caused problems for the shopkeepers and so on because people will come to their second home while the weather is nice, but they won’t come when it is lousy. Some times of the year the place seems empty.”

Banning the building of new second homes would be a popular in a town where high house prices exclude local people, said Mr Meakin. “We would be very keen to have that in our local plan,” he said.

Rob Wheeler, a town councillor at Salcombe, dubbed Chelsea-on-Sea after topping the chart of the most expensive places to live by the sea in Britain, said communities must be given tools to control their environment. He said tourists were vital to the town’s economy and there was no wish to deter them, but councillors were frequently thwarted in their attempt to maintain the character of places like Salcombe by outdated planning laws.

As a result, glass and concrete new builds were springing up with million pound plus price tags, he said. “In planning we are seeing a feeding frenzy,” said Mr Wheeler. “These places are £1m-1.5million and that’s absolutely not serving the local community. In Salcombe a property for £300,000 to £400,000 would be considered a bargain, but how on earth can someone earning £15,000 even afford that?”

Shaun Spiers, chief executive at the Campaign to Protect Rural England, said: “There is a crying need for affordable housing for people with local connections in places like St Ives. But demand for new market housing in such places is extremely high, and if it is not curtailed in some way their character will be destroyed.”

And in another piece in today's WMN, makes the priority for housing perfectly clear:


WMN opinion: Local homes for the locals must be the way ahead

Like it or not, in a market-driven economy attractive areas of the country will always command the highest house prices. And while rural living might be just a passing fashion – a century ago few people would have been seeking out a home in the shires – it is a fashion that looks to be long lived. So we who live in the Westcountry may well be saddled with the highest rural house prices tag for a while yet. That’s not all bad. Local people benefit from seeing the value of the house they have scrimped and saved to buy go up. And when property prices are high, even the cash poor have an asset against which they can borrow – just ask any owner-occupier farmer who needs to invest in his business right now.

But while the growth of the million-pound plus homes can be legitimately seen as an endorsement of our region as a place to live, lower down the price scale, the fact that rural home buyers

need to find on average £56,000 more than those in towns if they want to buy is having a damaging impact. Put bluntly it means our rural hamlets and villages have house room only for the well-heeled. That means commuters who may sleep in the country but work in the town, make up the bulk of the population while people of real value in country areas, from farm workers to farriers, painters and decorators to plumbers, can’t find a foothold and have to move to the towns.

Its a phenomenon that is clear to see in some areas but, thankfully, has yet to make an impact in others. There are still families with their roots deep in the countryside who undertake important rural jobs who hang on. And there are farms and estates with tied cottages let to farm and forestry workers, privately let properties at reasonable rents for those with rural jobs and some who bought before prices sky-rocketed who are sitting tight and glad to see values go up. The danger is, however, that over time things will change.

When cottages come up for sale, how many will be bought by the stockman or the farrier? When estates sell off a few tied properties, how many will go to the tenants and how many to incomers – whether for first or second homes – who have no link with the area? The only way to counter this, short of an unfair restriction on who can buy homes already built is to put up more properties, sympathetically built in the right places, with local restrictions on their sale or rent. It is already happening. It needs to happen a great deal more.

WMN opinion: Local homes for the locals must be the way ahead | Western Morning News
.
.
.
Posted by Jeremy Woodward at 15:52