"Rural communities ... are being ruined by house builders ‘let off the leash’"

Parallel to concerns expressed by the out-going chair of the National Trust
Futures Forum: "National Trust accuses an arrogant and philistine political class of ruining some of our loveliest countryside."

... the latest edition of the 'countryside bible' has been very critical of 'development' in the country: 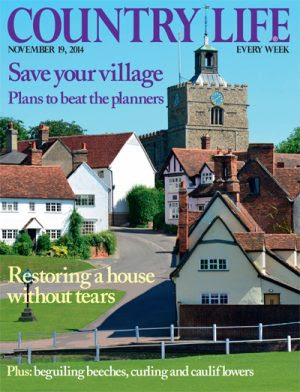 As reported by the Daily Mail:


118
View comments
Britain's villages are under attack from predatory developers exploiting relaxed planning laws, the ‘countryside bible’ is warning.
Country Life magazine says rural communities are being ruined by house builders ‘let off the leash’ by David Cameron.
As a result, large estates are being built on the outskirts of villages, leaving residents with overcrowded schools and over-subscribed GP surgeries.
Those who try to defend themselves from ‘ugly, poorly conceived housing sprawl’ are dismissed as Nimbys (not in my back yard), says the magazine.
Scroll down for video

VILLAGE THAT COULD DOUBLE IN SIZE THANKS TO NEW DEVELOPMENTS 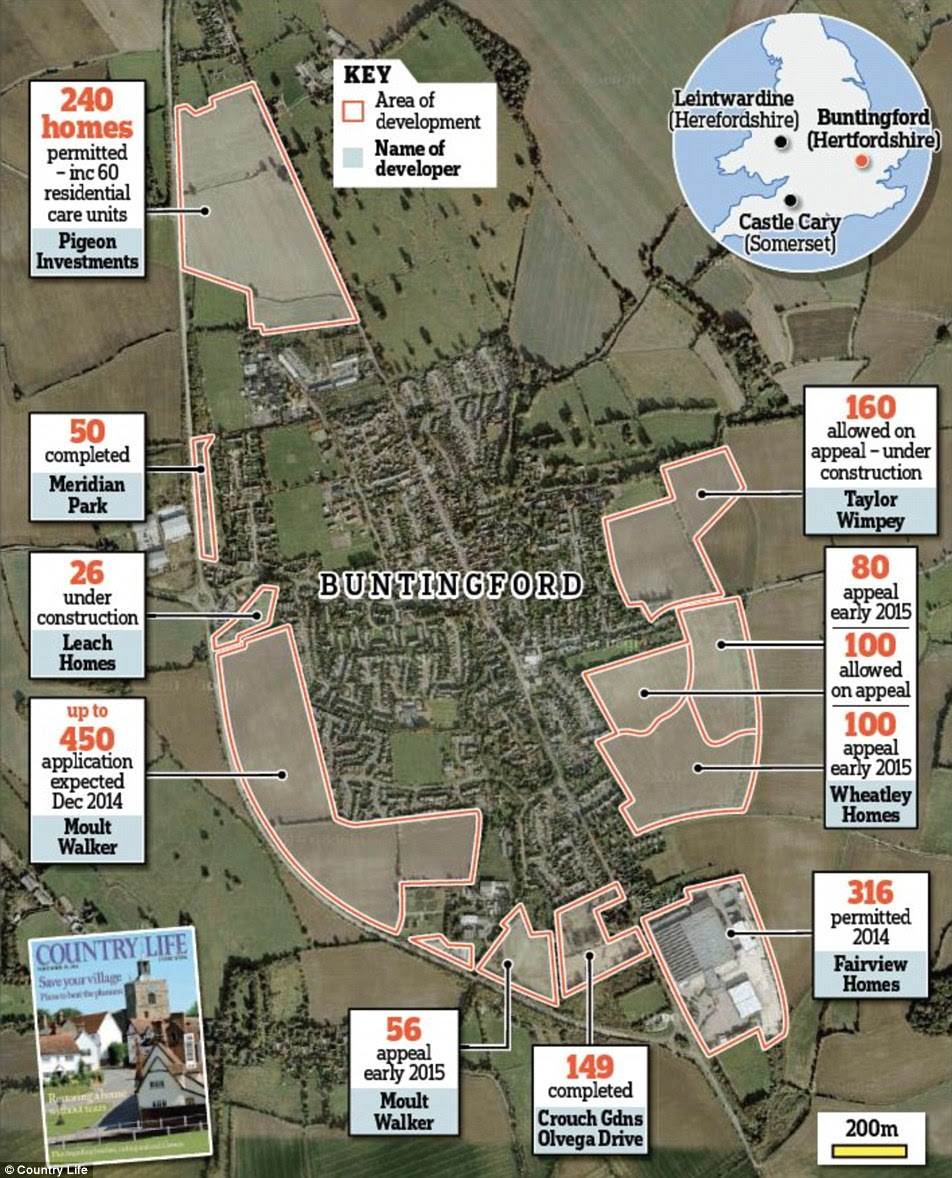 +9
Locals claim the Hertfordshire village of Buntingford has become a ‘dumping ground’ for Londoners priced out of the capital.
Planning permission for 1,000 houses has already been granted. And further applications and appeals could add several hundred more, potentially doubling the village’s size.
Residents say there is insufficient infrastructure to support such rapid expansion, with schools and doctors’ surgeries already full.
‘All you can hear is construction vehicles. They carry on up and down all day long, every day,’ said barmaid Charlotte Shaw, 21.
‘Families are going to move here with their kids who need schools and will need doctors when they get ill. But they don’t seem to be thinking about the infrastructure.’
Toby Archer, 46, who runs the Cheese Plate shop and is chairman of Buntingford Chamber of Commerce, said: ‘We are just being shafted by the local council.
'A district plan should have been in place but until then it is carte blanche for developers.
'We were told to expect 500 houses, but now we are getting 1,500. We have become a dumping ground for Londoners.’
The article, by editor-at-large Clive Aslet, follows a strong denunciation of how politicians were ruining the countryside by Sir Simon Jenkins, the chairman of the National Trust in Saturday’s Daily Mail.
Mr Aslet says the countryside has been ‘stripped of its natural defences’ leading to ‘a rash of ill-considered housing’.

Share
He points the finger at the National Planning Policy Framework which the Government introduced two years ago to boost development and tackle the housing crisis by cutting red tape.
The guidelines said councils which had not earmarked suitable land to meet housing demand over the next five years must adopt a presumption in favour of planning permission.
Mr Aslet said Buntingford in Hertfordshire, Leintwardine in Herefordshire, and Castle Cary in Somerset are among communities whose character is most at risk from developers.
Leintwardine faces three separate applications to build around its borders, adding to the two estates already there. 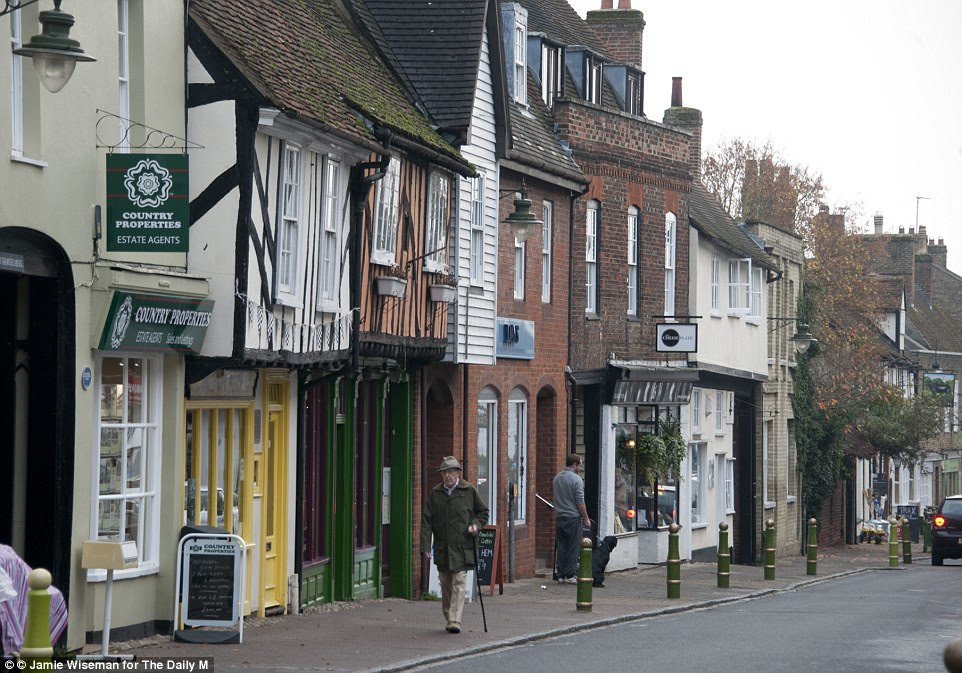 +9
Under threat: Locals in Buntingford say housing will put a strain on nurseries and GPs, but fear being dismissed as Nimbys for complaining 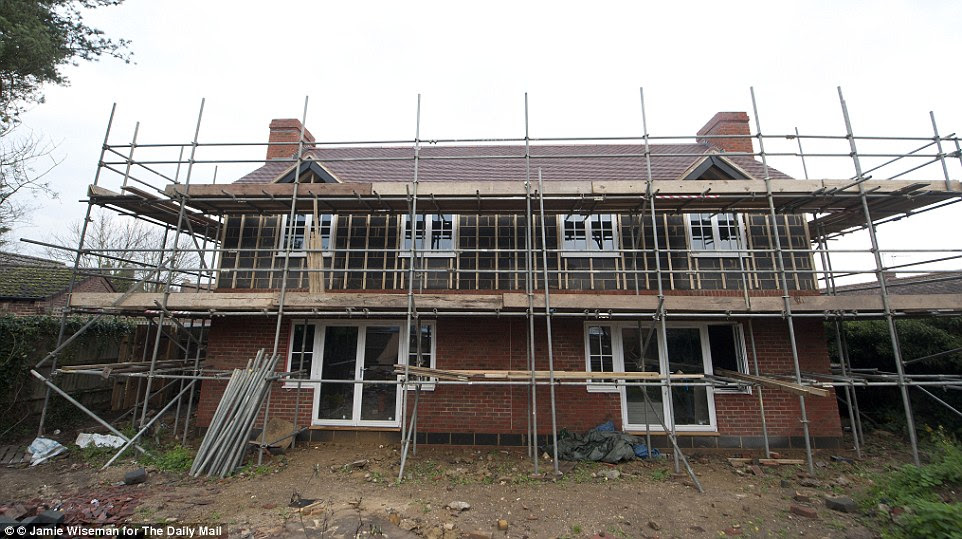 +9
Moving in: Residents complain that their village has become a dumping ground for Londoners priced out of living in the capital

In Castle Cary, four housing developments are under consideration. And in Buntingford, residents face the prospect of 1,000 new homes for which there is ‘insufficient infrastructure’. If approved, its population will have doubled since 2011.
Opponents of the expansion claim the average waiting time for a doctor’s appointment is already up to three weeks and the schools are full.
Mr Aslet said that while farmland was once protected and rural areas kept ‘mostly green’, the balance had changed with the introduction of the new guidelines.
Councils must now create local plans identifying land for housing.
‘Those who can’t are naked in the face of predatory developers’, he said. ‘Communities that don’t have local plans in place are similarly meat for the wolves.
‘The threat of appeal, with all the associated costs, is cowing some local authorities into granting applications that they would like to refuse. Leintwardine, Castle Cary and Buntingford are being transformed without any vision beyond Treasury diktat and developers’ greed.

WE'RE NOT NIMBYS... BUT OUR ROADS JUST CAN'T COPE 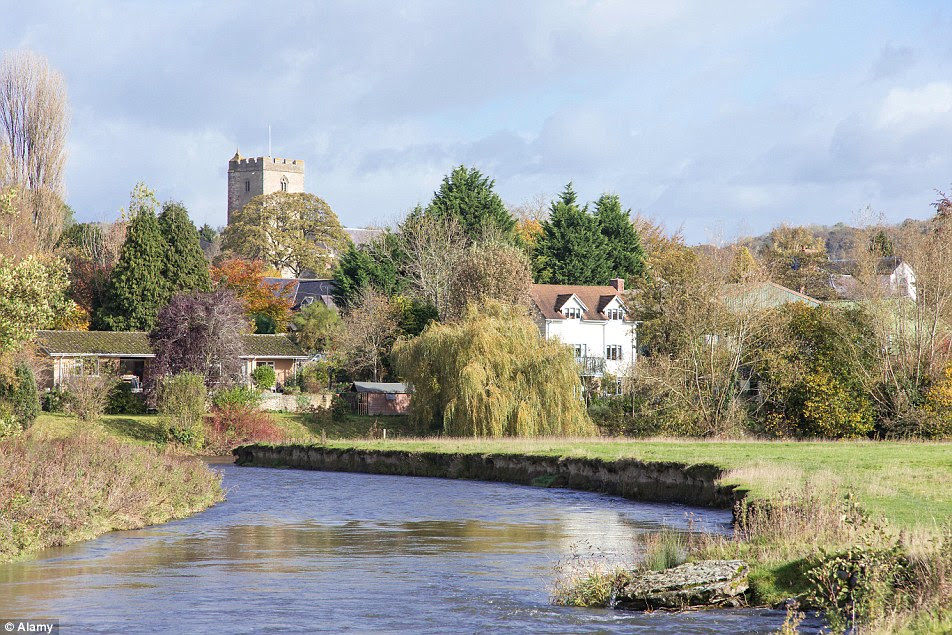 +9
Founded by the Romans, the Herefordshire village of Leintwardine has hardly expanded since, but now developers have lodged three applications that would double its size.
Alison Kay, chairman of Leintwardine parish council, insists they are not Nimbys. ‘We aren’t against development,’ she said. 'There’s a need for more bungalows for old people and self-build homes for young families.'
But schools are at capacity and the country lanes cannot take any more traffic.
Barman John Ball, 74, said: ‘The land they want to build on is boggy and the road is far too narrow and you cannot widen it. There will be sewage problems too.
‘There is no work around here. There is no transport so people are going to have to have cars. It will certainly put a strain on the amenities here.’
‘Many of the ills associated with volume house building result from developers’ short-term involvement with the sites.
‘After the houses are sold, they walk away, without further thought for the viability or attractiveness of what they’ve built.’
Yesterday, charities supported the claims and said the Government’s planning framework had left many rural communities powerless to resist major developments.
According to The Campaign to Protect Rural England, planning permission has been given for 27,000 houses on greenfield sites against the wishes of local authorities in the past two years. 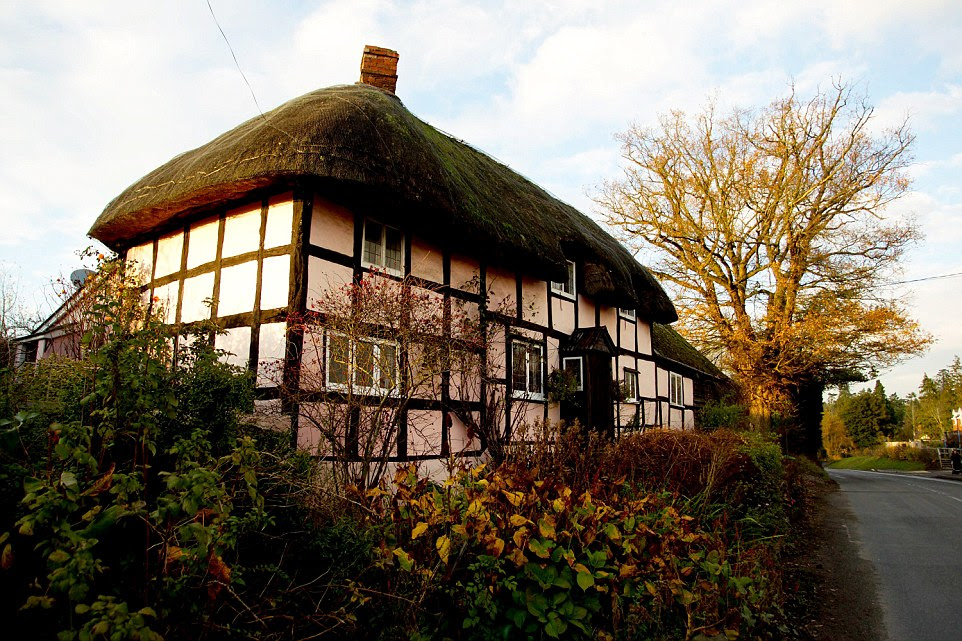 +9
Traditional: Leintwardine has hardly expanded since being founded by the Romans but could double in size thanks to planning applications 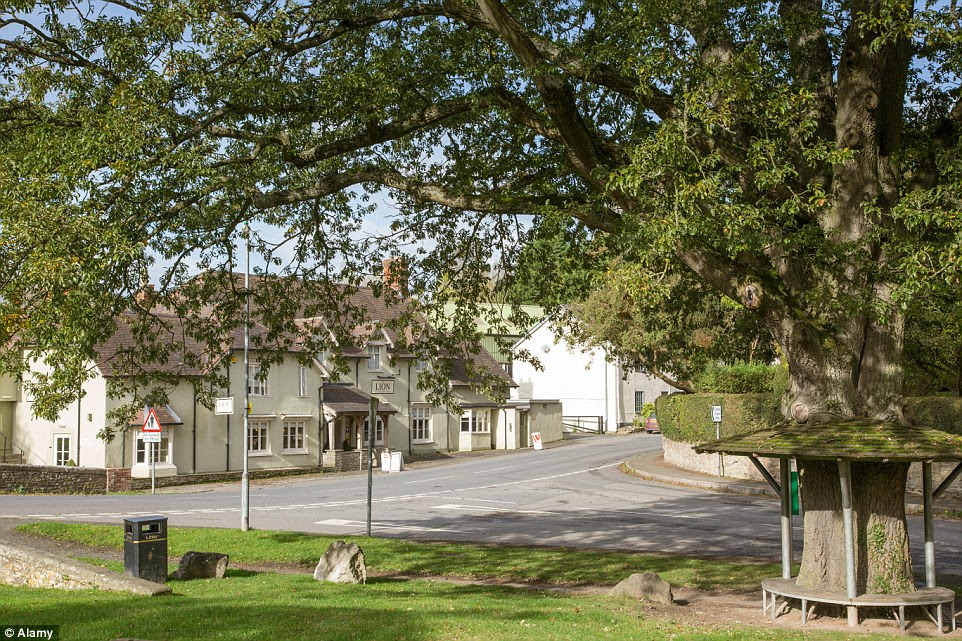 +9
No plan: Villagers say they would like new housing but that the new developments have been poorly thought out and will cause problems

Even where councils have identified land for housing, some developers still apply to build on more desirable sites.
The CPRE said house builders were targeting villages on the outskirts of national parks and areas of outstanding natural beauty which were not protected from development.
Paul Miner said: ‘They know they can sell the houses quickly and for a high price.
‘Some councils still have no local plans in place so they have to adopt a presumption in favour of planning permission, even on greenbelt land.
‘Even where councils have got a local plan, developers are appealing to the Planning Inspectorate if they are refused – and one in six of these appeals are then approved.’
Sarah Lee, of the Countryside Alliance, said the need to build more homes in rural areas was accepted, but such developments must be done ‘sensitively’. 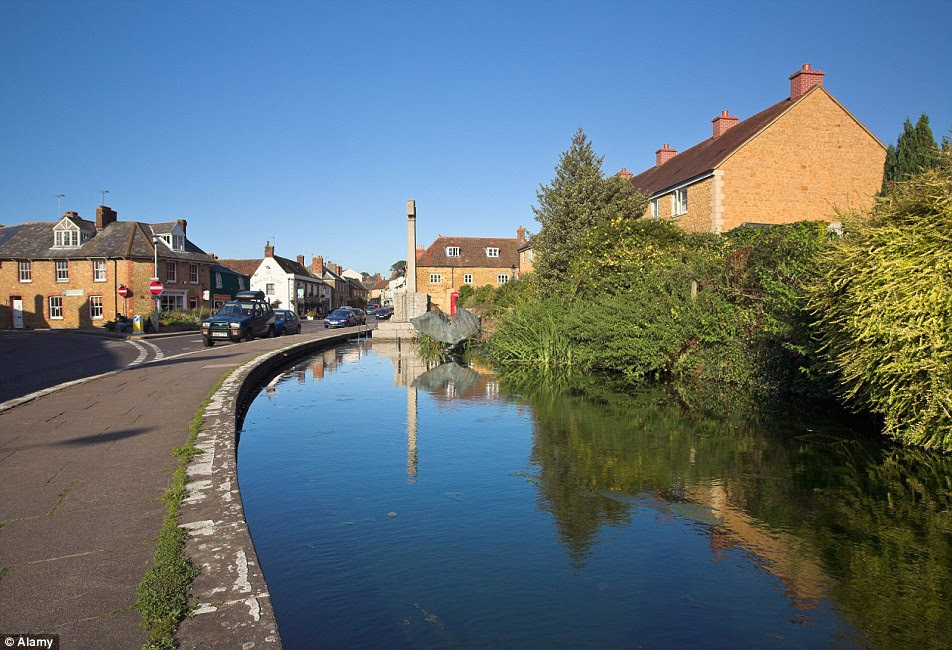 +9
Residents in Castle Cary are scared that a huge development ‘plonked on the outside’ of their idyllic market town will end up destroying it.
If applications for four new housing estates are approved the Somerset town’s population could soar by 40 per cent.
Locals fear a large supermarket would be built to serve the 400 homes, destroying the character of Castle Cary’s quaint high street.
Pek Peppin, planning chairman for the town council, said: ‘At the moment there seems to be applications coming in on a weekly basis.
‘The town has a very small population. One of the main problems is that we have very poor road structure – little more than country lanes.
‘If we got a high number of new houses built the roads will become absolutely impossible.’
‘If we do not build more housing for young families then rural communities will wither. It would be naive to think otherwise,’ she said.
‘However, it must be done in an organic way and in keeping with the community rather than parachuting 2,000 houses on to the edge of a village.
'The danger is that you lose the character of that community.’
Pressure to meet the Government’s housebuilding targets meant some councils had not planned properly how this should be achieved, she said.
However, planning minister Brandon Lewis last night insisted the Government had put countryside protection at the heart of planning reforms and said Country Life’s claims were ‘simply not true’. 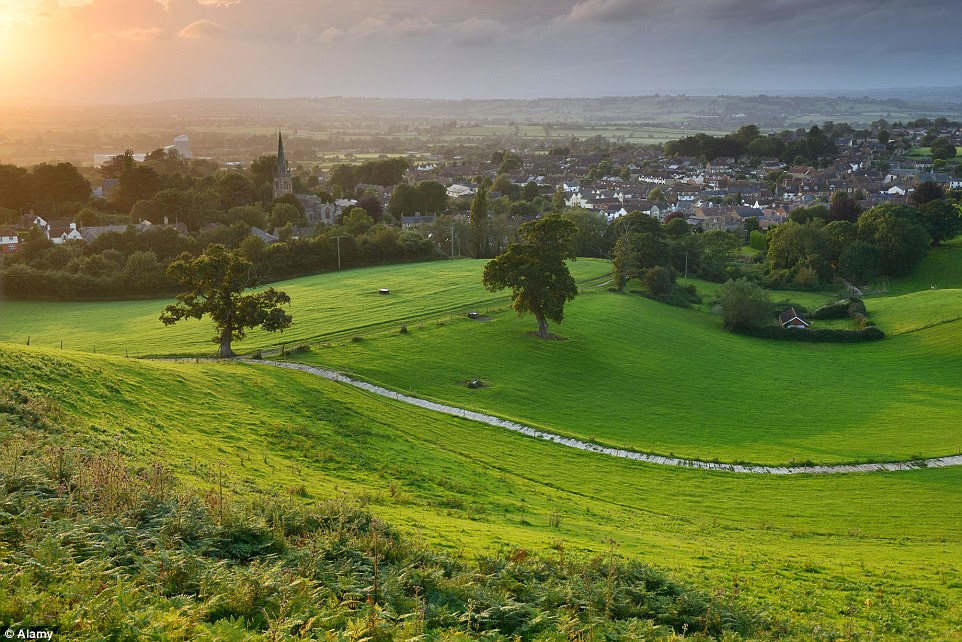 +9
Sensitive: Villagers say there is a need for developments, but parachuting 2,000 new homes on to the edge of a small town such as Castle Cary (pictured) will destroy it rather than improving it 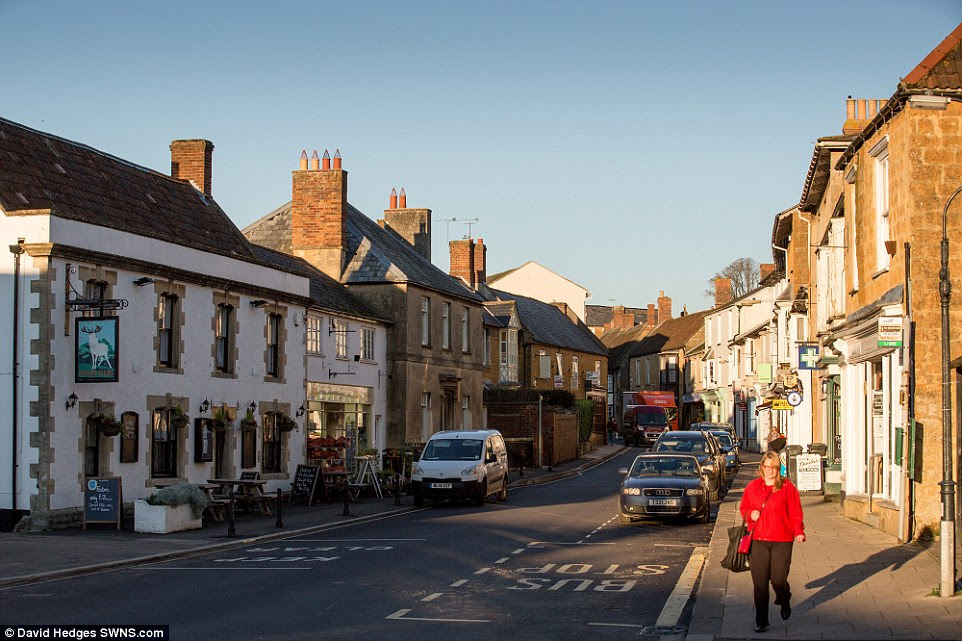 +9
Supermarket sweep: Those living in Castle Cary fear a large shopping centre could be built to cater for new arrivals, wrecking their high street

‘We have put strong protections in place for the Green Belt, so it can continue to offer a strong defence against urban sprawl,’ he said.
‘Local plans mean local people can now decide where development should and shouldn’t go.’
He said the Government was building homes to help ‘first time buyers onto the property ladder’ but still recognised the ‘importance of protecting the environment and our countryside and favouring brownfield sites for development’.
The Government has said that by 2020 it hopes more than 90 per cent of brownfield land suitable for housing will have planning permission for new homes.

The full article is in Country Life magazine, available today.

Thanks to:
“Country Life” magazine wades into the “sustainable” development in the countryside argument | East Devon Alliance
.
.
.
Posted by Jeremy Woodward at 07:18