The 'Peterloo Massacre' happened in Manchester two hundred years ago: 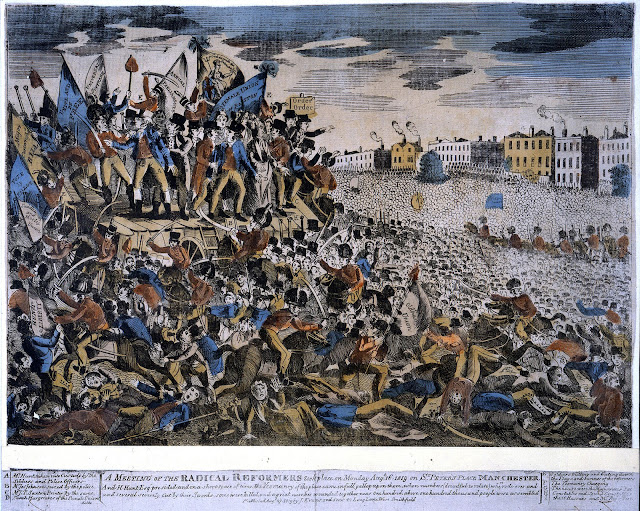 ... will be showing in Sidmouth this Tuesday:
https://sidmouth.scottcinemas.co.uk/film/peterloo

Should it be seen as 'a key turning point in British history'?
The bloody clash that changed Britain | News | The Guardian
The left’s romantic view of Peterloo is wrong | Comment | The Times

The poet Shelley certainly thought so at the time:
The Peterloo Massacre and Shelley’s Great Poem The Mask of Anarchy - LawNow Magazine

... and referenced the Home Secretary Lord Sidmouth more than once:

The Masque of Anarchy
The first nine stanzas annotated

As I lay asleep in Italy
There came a voice from over the Sea,


And with great power it forth led me


To walk in the visions of Poesy.
The poem is a dream, like the dream visions in Chaucer or Bunyan's Pilgrim's Progress. Yet in the first verse we also have the sense of Shelley being woken from the unreality of his life in Italy.


Very smooth he looked, yet grim;


Seven blood-hounds followed him:
Viscount Castlereagh, leader of the Tories in the Commons, was a spokesman for the harsh measures of political repression that followed the Peterloo massacre. Note that "Murder" is like Castlereagh, not the other way round: individual politicians are reduced to personifications of eternal vices.


All were fat; and well they might
Be in admirable plight,


He tossed the human hearts to chew
Which from his wide cloak he drew.
Shelley's friend Leigh Hunt praised his "union of ludicrousness with terror" – as in this blending of apocalyptic vision with pantomime.


Next came Fraud, and he had on,
Like Eldon, an ermined gown;


His big tears, for he wept well,


Turned to mill-stones as they fell.
Lord Eldon was lord chancellor. He decided the fate of Shelley's children by his first wife, Harriet, after her suicide – refusing Shelley custody because of his "immoral and vicious" principles. Eldon was renowned for weeping even as he pronounced the harshest of sentences.


And the little children, who
Round his feet played to and fro,


Thinking every tear a gem,


Had their brains knocked out by them.
A stanza echoed in WH Auden's Epitaph on a Tyrant: "when he cried the little children died in the streets".


Clothed with the Bible, as with light,
And the shadows of the night,


On a crocodile rode by.
Viscount Sidmouth was home secretary and defended the Peterloo massacre. He evokes shadows because he was in charge of the government's secret service, and is "clothed with the Bible" because of his apparent piety: he was an advocate of church building.


And many more Destructions played
In this ghastly masquerade,


All disguised, even to the eyes,


Last came Anarchy: he rode
On a white horse, splashed with blood;


He was pale even to the lips,


Like Death in the Apocalypse.
Shelley explicitly evokes the Book of Revelation: the three British lords and Anarchy are the four horsemen of the Apocalypse.


And he wore a kingly crown;
And in his grasp a sceptre shone;


On his brow this mark I saw -


'I AM GOD, AND KING, AND LAW!'
Like the Mark of the Beast in Revelation on the one who is King of Kings, and Lord of Lords.
Anarchy in Peterloo: Shelley's poem unmasked | Culture | The Guardian

Henry Addington, 1st Viscount Sidmouth, had his seat at Upottery:
Landed families of Britain and Ireland: (44) Addington of Up Ottery and Erleigh Court, Viscounts Sidmouth

The story will be coming to the Sidmouth Folk Week later this year:

In its bicentennial year, The Road To Peterloo tells the story of one of the most notorious incidents in British labour history – the ‘Peterloo Massacre’ in Manchester in 1819 – through some of the many broadside ballads that were printed around the time of the event.

Three singers and musicians from North West England – Pete Coe, Brian Peters and Laura Smyth – trace the story from its roots in the poverty and hunger suffered by handloom weavers in the early 19th century. With songs describing the terrible events of the day itself, and the later political developments inspired by the carnage.

The Manor Pavilion – The Sidmouth Folk Festival
.
.
.
Posted by Jeremy Woodward at 09:37