"Are we living in a ‘golden age’ of political conspiracy theories?"

Certainly, these have largely become normalised:
BBC Radio 4 - Analysis, The War for Normal
Futures Forum: How the political fringes became part of the mainstream

Conspiracy theories:
Laurie Taylor talks to Thomas Konda, Professor of Political Science at SUNY, Plattsburgh, about the history and changing nature of conspiracy theories. Why have such wild theories overrun America?

Also, Hugo Leal, Methods Fellow at the University of Cambridge discusses the most comprehensive examination of conspiracy theories ever conducted. About 11,500 people were surveyed in a study covered nine countries - the US, Britain (excluding Northern Ireland), Poland, Italy, France, Germany, Portugal, Sweden and Hungary.

The research found that Trump and Brexit voters were more likely to believe in conspiracy theories than others.

And from the UK:
Conspiracy & Democracy – CRASSH
Is technology killing democracy? - Cambridge Wireless
Britain is becoming a land of conspiracy theorists - Bagehot

And one of the most powerful conspiracy theories of our day centres around Brexit: 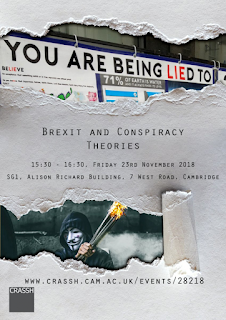 
Findings suggest that a large number of people across the surveyed countries think their governments are “hiding the truth” about immigration. In particular, researchers found that Brexit and Trump voters are significantly more likely to believe in this and a wide range of other conspiracy theories – including that “Muslim immigration to this country is part of a bigger plan to make Muslims a majority”, that “man-made global warming is a hoax”, and that “the truth about the harmful effects of vaccines is being deliberately hidden from the public”.

And indeed, this has been widely covered:
Third of Brexit voters believe Muslim immigration is part of a secret plot to Islamicise Britain, study suggests | The Independent
Brexit and Trump voters are more likely to believe in conspiracy theories | YouGov

Of course, a conspiracy theory needs believers:
Shocked as I am to say it, there does appear to be an establishment conspiracy against Brexit | BrexitCentral
Brexit CONSPIRACY: Brexiteer claims MPs 'DELIBERATELY' sabotaged Brexit to FOOL public | UK | News | Express.co.uk

And now the leader of the new Brexit Party has had a bit of explaining to do:

Nigel Farage, the Brexit party leader, has insisted he is not a conspiracy theorist after he repeatedly appeared on a far-right US talkshow and openly discussed ideas about a “new world order” linked to antisemitic tropes.

The former Ukip leader distanced himself from Alex Jones, the host of the Infowars website, and claimed his appearances on the programme were infrequent, despite a Guardian investigation finding he gave interviews at least six times on the show.

A very high level post with a knowledgeable information .thanks you for giving me such a nice information. My article is made of Fake Snapchat , if you have any problem then you can visit my profile.