Climate change: are new UK targets too tough or not tough enough?

Last week, MPs were urged to show they could act on climate change:
Futures Forum: Calls for the UK parliament to declare a 'climate emergency'

Are these targets too difficult, though?
Reaching net-zero emissions will not be easy | Financial Times

This is from a helpful overview from Vox:

The UK could achieve the most aggressive climate goal in the world
Lawmakers also declared a “climate emergency” this week.

The UK government’s official climate adviser this week said that the country can zero out its contributions to climate change by the middle of the century.

If the target recommended by the Committee on Climate Change was officially adopted, it would put the UK on a more aggressive timetable than its current target of cutting emissions 80 percent by 2050 compared to 1990 levels, a goal enshrined in the 2008 Climate Change Act. The CCC’s target is “net-zero,” which doesn’t mean “no emissions at all” but that any carbon dioxide emitted has to be offset or removed.

“Ten years after the Climate Change Act became law, now is the right moment to set a more ambitious goal,” the CCC said in a statement. “The CCC’s recommended targets, which cover all sectors of the UK, Scottish and Welsh economies, are achievable with known technologies, alongside improvements in people’s lives, and should be put into law as soon as possible.”

It means that by 2035, all new cars must be electric. Forests must expand from covering 13 percent of land today to 17 percent by 2050. All buildings must be retrofitted and decarbonized. People must consume less meat. Thermostats in the winter should be set no higher than 19 degrees Celsius.

If the UK government adopts the recommendations, it would become the first G7 country to make such an ambitious commitment. It would also likely be the most comprehensive and ambitious climate target in the world, since the CCC’s recommendation encompasses the entire economy, and the country is starting from an inefficient, fossil fuel-heavy baseline.

It’s a much bigger shift than, say, Costa Rica, another country that’s committed to carbon neutrality. Costa Rica is a much smaller economy and already gets a much larger share of its energy from clean sources. The climate committee’s recommendation also reaches further than the net-zero by 2045 law in Sweden, which excludes international shipping and aviation totals.

The UK, the birthplace of the industrial revolution, also has a long history of greenhouse gases to take into account. It ranks seventh in the world in cumulative emissions since 1750.

The committee report came out just as a massive weeks-long climate protest in London by the activist group Extinction Rebellion was wind down. Protestors achieved one of their main objectives on Wednesday when the UK parliament declared a climate change emergency.

However, activists are still not satisfied and have said the recommendation is not aggressive enough.

Here are some things to know about the report.

Carbon dioxide emissions in the UK have been trending downward since the 1970s as the country shifted away from burning coal. In 2017, UK greenhouse gas emissions fell to levels not seen since 1890: 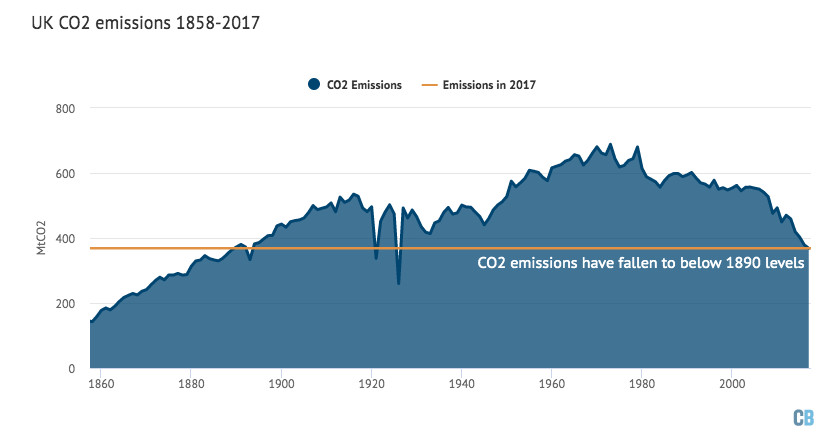 Annual UK emissions have fallen below levels not seen since 1890. Carbon Brief

But the UK still has a long route to zero. Fossil fuels still provide the bulk of energy in the country, so there needs to be vastly more deployment of clean energy and wider electrification across the economy.

The United Kingdom still gets most of its energy from fossil fuels. Carbon Brief

The climate committee estimated that drawing down emissions in the United Kingdom would cost between 1 to 2 percent of the country’s gross domestic product each year until 2050. That’s the same cost bracket as the current UK goal.

“Falls in cost for some of the key zero-carbon technologies mean that achieving net-zero is now possible within the economic cost that Parliament originally accepted when it passed the Climate Change Act in 2008,” according to the report.

And the UK has experienced a growing divergence between its economy and its emissions over the past two decades, which likely means the UK economy will continue to grow even as it cuts its emissions. 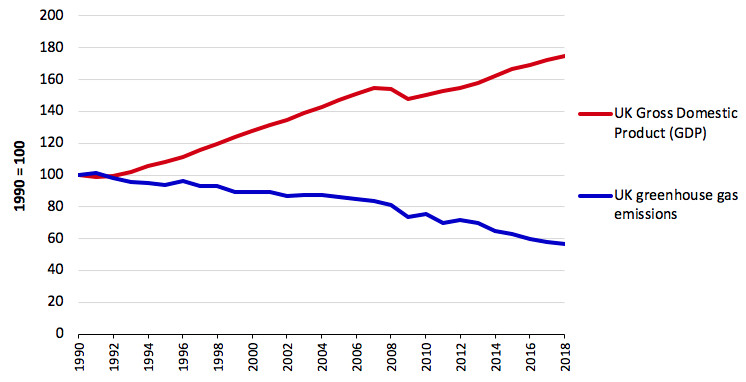 The UK has experienced a divergence between its economy and its emissions over the past two decades. Committee on Climate Change

Extinction Rebellion activists described the recommendation as a “betrayal.”

The advice of @theCCCuk to the UK government is a betrayal of current & future generations made all the more shocking coming just hours after UK MPs passed a motion to declare an environment & climate emergency. #RebelForLife: https://rebellion.earth/ https://www.theccc.org.uk/2019/05/02/phase-out-greenhouse-gas-emissions-by-2050-to-end-uk-contribution-to-global-warming/ …

Phase out greenhouse gas emissions by 2050 to end UK contribution to global warming - Committee on...

184 people are talking about this

“2050 condemns us to a bleak future,” said Lorna Greenwood of Extinction Rebellion, in a statement. “We may as well not have a target at all. Others are already dying around the world thanks to inaction and far off target setting.”

The group argues that the committee’s recommendation would only give the world a 50 percent chance of limiting temperature increases this century to 1.5 degrees Celsius.

The fight over when to reach net-zero emissions mirrors a similar objections environmental groups raised in the United States this week when presidential contender Beto O’Rourke unveiled his plan to drawdown US emissions to zero by 2050.

Some researchers said the UK climate committee was too optimistic in its recommendation, presuming that many aspects of a modern energy-intensive lifestyle would go unchanged. The report also avoided tackling thorny questions, like who is justly required to pay for the transition to a cleaner economy.

“This generational transfer of responsibility enables the CCC to maintain a thriving aviation sector and leave unquestioned the huge inequality in who is responsible for most of UK emissions,” wrote Kevin Anderson, a professor at the Tyndall Centre for Climate Change Research at the University of Manchester. “What’s not to like – business as usual, albeit with a sizeable green twist, and influential high-emitting groups left unencumbered by policies tailored towards their carbon-intensive lifestyles.”

The committee did call for electrifying transportation, one of the largest sources of emissions, as a critical tactic to fight climate change, but air travel has proved to be an extremely difficult sector to decarbonize and shows no signs of slowing down.
Climate change: UK committee recommends net-zero emissions by 2050 - Vox
.
.
.
Posted by Jeremy Woodward at 08:46