Brexit: and the EU elections: Democratic Audit looks at what will happen in the South West

The Prime Minister launched the Tory campaign in Bristol yesterday, as reported by the Telegraph:
Glum faces, a speech to an empty room and a hurried exit as Theresa May's campaign turns into a wake - Telegraph

Other parties were in the area a little earlier:
Futures Forum: Brexit: and the EU elections: starting in the South West

It seems that a lot of the deciding between many of these candidates will be done tactically:
Futures Forum: Brexit: and the EU elections: tactical voting

Here's a very helpful overview from the Democratic Audit from earlier today:

European elections 2019: what will happen in England’s South West?

In recent years the South West of England has become a Conservative stronghold, as the opposition from the Liberal Democrats in rural areas dwindled, restoring an older pattern of Labour challenging from the few big cities like Bristol, Plymouth and Exeter. However, in European Parliament elections, UKIP came first in 2014, winning two of the region’s six seats, and helping shape a strong Leave vote in the 2016 Brexit referendum – an inheritance that now falls to the Brexit Party. With regional Conservative support now at unprecedentedly low levels, the three strong pro-Remain parties are vying to get two seats between them. With voters able to cast only a single vote for a party list, the Democratic Audit team reviews likely outcomes and the main potentially electable candidates.
The South West region spans across Bristol, Gloucestershire, Wiltshire, Somerset, Dorset, Devon and Cornwall, plus the overseas territory of Gibraltar. With several high-profile celebrity candidacies competing, the region has attracted greater than usual media attention. The Conservatives’ past lock on electoral success here was squeezed in previous European Parliament elections, culminating in 2014, when UKIP won 32% to the Tories’ 29%, though both parties picked up two seats.
The new Brexit Party has inherited almost all the past UKIP voters and seems to have cannibalised much of the Conservative vote share too. Figure 1 shows that in aComRes poll conducted in early May Farage’s party has 34% support in this region and so will easily gain two seats. Ann Widdecombe, a former Conservative minister (and Strictly Come Dancing contestant) heads their list and is guaranteed to win a seat. They should also gain another one, and a third seat is not beyond the bounds of possibility.
Labour are currently polling second with 18%, up quite a bit on their 14% in 2014. Their incumbent MEP Clare Moody heads their list and is sure to be re-elected, but Lord Andrew Adonis (an arch-Remainer and supporter of a second referendum) still looks unlikely to win a second seat. Labour’s efforts to seek votes from both Leave and Remain supporters reflects the tensions in its position on Brexit, so pro-Remainers may choose to support one of the next three parties taking an unambiguous Remain line.
The Greens won the region’s final seat with 11% support in 2014. On the regional ComRes poll they are currently on 9%. But they face competition from the resurgent Liberal Democrats on 13% and Change UK/The Independent Group on 11%. This result would give the Liberal Democrats one seat, and the new Change UK party would also gain a seat, while the Greens might miss out. The Greens have the advantage of an incumbent and relatively well known MEP in Molly Scott Cato. But Change UK’s lead candidate here is Rachel Johnson (a well-known journalist and also Boris Johnson’s sister). Which of them prevails may hang on a combination of personal profile and their party’s national fortunes – which vary considerably from poll to poll. To complicate the picture, in the ComRes regression analysis of their poll (details in the footnote to Figure 1) the Liberal Democrats were rated well ahead on 17%, and Change UK and the Greens both counted out at 6%. Given the small samples in regional polls, the exact standing of these smaller parties is especially hard to judge.
Meanwhile on the right, the Conservatives languish on just 11% in Figure 1, and on this basis would retain only one of their seats. However, again the ComRes re-analysis using demographics and regression techniques boosts their vote share to 16%, although this is still not enough for a second seat.
Finally UKIP itself has just 3% of voters backing it and no chance of a seat. Their second-placed candidate is the social media provocateur Carl Benjamin, who has been banned from most social media for making unpleasant rape jokes targeting female MPs, attracting considerable press and public condemnation. He has no chance of being elected, but may have helped hasten his party’s total demise.
All the parties have six parties standing in the region, though any one listed in the bottom half of their candidate list cannot possibly win a seat under proportional representation. Voters select just one party to vote for on the ballot paper, not individual candidates.  In making up their minds which party list to support, voters need only pay attention to the candidates in the shaded boxes below.
Figure 1: Main party candidates in the South West (with ComRes poll data, 1–7 May 2019) and possible winners 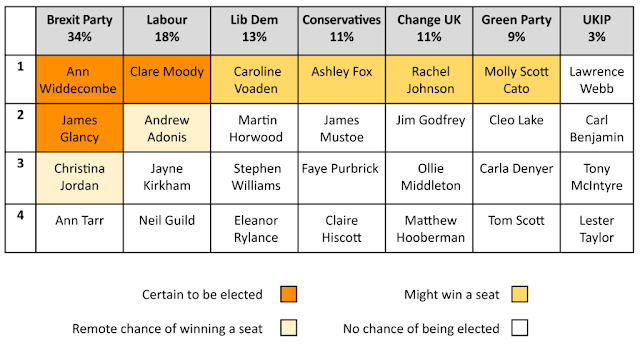 Note: ComRes also produced revised poll numbers using a technique called MRP, which adjusts the results based on past results and local demographics, and puts the Brexit Party on 30%, Labour on 19%, Lib Dems on 17% Conservatives on 16%, Greens on 9% and Change UK on 6%).
To find details of all the local candidates, and to locate your polling station, visit our Democratic Dashboard site and enter your postcode. The site also has full details of other recent elections in your local area.


Below we list a summary of any candidate in Figure 1 with some chance of being elected, and point you to their social media sites, which can show something of what each candidate is like as a person.  At the bottom of this article we also show the full 2014 results for the South West.

Which candidates could be elected in the South West in 2019?

THE BREXIT PARTY has fielded a list headed by some high-profile candidates, strengthening their assured chance of winning two seats, and perhaps even three on a good surge day.
LABOUR look certain to retain their current seat, but unlikely to get enough support to win another one.
LIBERAL DEMOCRATS – Until 2014, the Lib Dems regularly returned MEPs to the European Parliament from the South West. On current polling, they have a good chance of getting one elected again.
CONSERVATIVES – Their recent regional dominance has not been enough to insulate them in this election. Although they will hold one of their existing seats, they are quite likely to lose the other on the ComRes data.
GREEN PARTY – The Green Party (just) won the region’s last seat in 2014, and their incumbent has a good chance of retaining it, although everything depends on how the strong pro-Remain vote splits.
CHANGE UK – The new party of former Labour and Conservative MPs is pushing hard in this region, and will hope that a high-profile candidate secures them one seat.
UKIP – The party looks likely to plummet from first to last place, perhaps aided by the highly controversial Carl Benjamin in second place on their list. Even their lead candidate below has no chance of success.
Figure 2: 2014 European Parliament results for the South West and MEPs 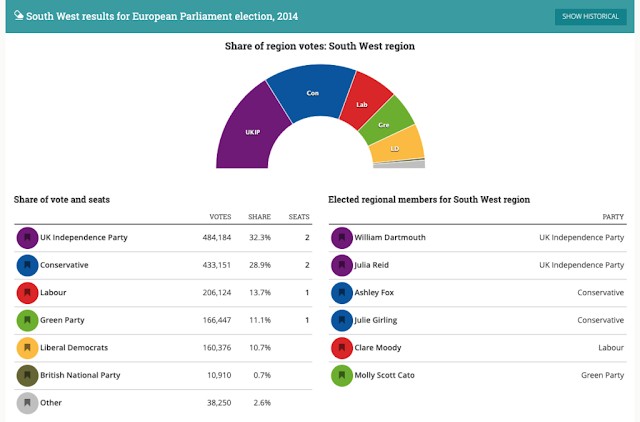 And a scurrilous posting from the Avaaz campaign group:
Avaaz - Stop the far right's Eurodivision | Facebook
.
.
.
Posted by Jeremy Woodward at 01:00