Chris Packham is calling for us to support Devon's beavers: 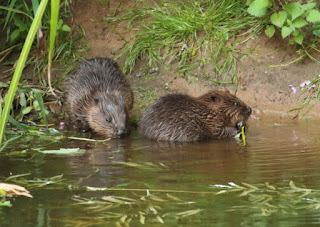 Television star and presenter Chris Packham is calling on residents to ‘make history’ by supporting a £100,000 project to secure the future of East Devon’s beavers

Devon Wildlife Trust is trying to raise the six figure sum through crowdfunding to secure the animals future past 2020.

The charity has to raise £700,000 itself to fund a five year project, monitoring the impact of the animals on the local landscapes, community and wildlife.

It is believed there are up to 20 beavers living in the River Otter – the first of their kind in England for 400 years.

Autumnwatch presenter Chris Packham has fronted a video appeal for the charity and described as ‘the chance to make history’ to keep the beavers in the River Otter.

The presenter said: “We have just four years in which to work with local people to prove to the government that beavers are good for the environment and can live in harmony with local people. If we don’t then the beavers will be removed.

“I have to tell you this is a once in a lifetime opportunity to help a magnificent and long lost mammal to thrive again.

“Please donate today to give Devon’s beavers a chance and to play a role in one of the most exciting conservation projects of the twentieth-first century. You never know it might pave the way for other native species to return to the UK.”

Following the conclusion of the charity’s five year trial in 2020, the government will make a decision on the beaver’s future.

Devon Wildlife Trust has to date raised almost half the sum through crowdfunding.

Crowdfunding allows the public to make pledges and are thanked with ‘rewards’ that reflect the money contributed.

Devon Wildlife Trust’s Mike Elsey said: “Rather than a simple plea for donations, we thought we’d do something different for Devon’s wild beavers. We’re asking people to pledge their support and in return we’re offering a range of very special unique beaver-themed rewards.”

To support the campaign visit: www.supportdevonbeavers.org