A short history of council housing

Here's quite a useful overview of the council house - shortened - from the University of the West of England:

The History of Council Housing


Historically council housing is public housing that is rented to households who are unable to afford to rent from the private sector or buy their own home. It has been called council housing due to the role of district and borough councils managing the housing. More recently Registered Social Landlords (RSLs), including semi-independent and not-for-profit housing associations, have played a larger role in providing and managing housing, consequently council and RSL housing is collectively known as ‘social housing’.

The underlying principle of council house provision is that historically the private sector was deemed unable to provide adequate housing for all and state intervention was required to ensure there was good quality affordable housing for low income households. The growth of council housing in this country has been largely determined by central government policies and legislation. Throughout the twentieth century there has been a shifting emphasis between two main objectives - the need to build more houses in the face of shortages, especially in the post war periods, and the need to replace old designated slum areas of cities. Each objective has received priority from Government at different times over the years and their policies have influenced the amount of new building and the type and quality of construction. 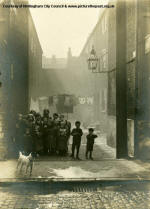 Britain’s cities began to expand on a large scale during the nineteenth century largely due to workers and labourers from the surrounding countryside flocking to the city seeking work during the years of industrialisation and growing opportunity for employment. House building at this time was largely done by profit-seeking private builders. Mostly they built long streets of terraced houses and these new communities were largely unplanned. The large majority of the population rented privately, from a modest room in a house to a grand residence in the country. Mainly due to the fact that borrowing and mortgages had not become commonplace, only the richest people could afford to own their own homes.

In the years before the First World War private builders had supplied virtually all new housing in towns and cities. The war, however, changed everything. Building activity came to a virtual standstill whilst the country fought. By the time of the General Election in 1918 it was becoming clear that the country faced an acute shortage of housing. Building costs were inflated and this, combined with a scarcity of materials and labour, made it impossible for the private developers to provide houses with rents within reach of the average working class family. The close of the war also brought a new social attitude that focused the Government’s attention on a national responsibility to provide homes, giving rise to Lloyd George's famous promise of 'homes fit for heroes' referring to the many soldiers returning from the war.

The Housing and Town Planning Act of 1919 (The Addison Act) was seen as a watershed in the provision of corporation (council) housing. Councils were thrust to the forefront as the providers and they began to plan their post-war housing programmes. Housing Committees were set up, working largely from recommendations from central government's advisory committee - the Tudor Walters Committee and encouraged to build through the provision of generous subsidies. The subsidy arrangements shared the costs of this new housing between the tenants, local rate payers and the Treasury. Councils in areas of high housing need could apply for these subsidies. The London County Council (the predecessor to the Greater London Council) also raised money through selling London housing bonds which promised investors a 6% return and raised £4 million during the 1920s.

After this initial burst of building activity across the country targeted at reducing the post-war housing shortage, local councils began to tackle the problem of its existing slum housing. The Housing Act of 1930 encouraged mass slum clearance and councils set to work to demolish poor quality housing and replace with new build. The photo on the left shows a designated Slum Officer at work to prioritise the demolition. Slum areas of housing existed in most inner city areas and were generally old, neglected and unhealthy places to live. Many of the houses had originally built for workers during the period of rapid industrial development often without thought for overcrowding or amenities such as an adequate water supply, ventilation and sunlight. Using powers available under the Act to acquire and demolish privately owned properties, slum clearance schemes were put into action across the country.

The outbreak of the Second World War effectively put a stop to house building for a second time. As the war drew to a close, Britain faced its worst housing shortage of the twentieth century. Thousands of houses across the country had been lost by heavy bombing and many more were badly damaged. It was estimated that 750,000 new homes were required in England and Wales in 1945 to provide all families with accommodation. Plans were drawn up for a major building programme, drawing on the themes established prior to 1939. The election of 1945 saw a Labour government voted in and housing policy was central to their welfare reforms in their manifesto. Aneurin Bevan, the Minister of Health, was responsible for the housing programme which focused heavily on local authority involvement rather than reliance of the private sector. Added pressure on the Government came in the form of soldiers returning from war and rising working class expectations as a result of Labour's promises.

The country was still faced with large areas of slum housing with many houses described as unfit to live in and many more people living in sub-standard conditions. Many of these houses had been due for demolition under slum clearance plans devised before the war under the 1930 Housing Act and had been neglected since. Inner city populations were growing rapidly and the shortage of good quality housing combined with inner city vacant and derelict sites left by the bombs created an opportunity for modernisers to promote a new urban vision. Architects and planners favoured a modernist approach and the 'streets in the sky' were devised. This was against a backdrop of political change, a new Conservative government was elected in in 1951 and after initially pledging to increase council house production in line with manifesto targets, sizes and standards were reduced and a greater emphasis of house building was given back to the private sector.

7 Pushing the Boundaries and Housing All

Another feature of the post-war expansion of council housing during the 1950s and 1960s was the development of more new peripheral estates on or close to the edge of the cities. By this time most inner city potential building sites had been exhausted and faced with growing waiting lists of people needing housing councils turned to the peripheries. Sometimes city boundaries were expanded to embrace these new estates. Peripheral expansion was partly about rehousing people from the congested inner city areas where redevelopment was taking place, and partly about responding to the sheer growth in demand for housing during the ‘baby boom’ period up until the 1970’s.

8 The Impact of the ‘Right to Buy’

From the 1970s councils built increasingly fewer homes, concentrating instead on repairs to their now aging housing stock. The introduction of the ‘Right to Buy’ under the Housing Act 1980 was a watershed event for councils all over the country. From the start local authorities have been able to sell off their houses, but until the introduction of the RTB they were not forced to do so. Up until this time mostly the production of new homes exceeded the numbers sold, however following the passing of this policy, the period of growth halted and began a decline. Largely it led to many of the better quality council properties being purchased by tenants who qualified for the right to buy. The number of houses managed by London’s councils had shrunk from 840,000 in 1984 to just over 500,000 by the end of the century. Another impact of the right to buy was that the majority of dwellings that were sold were houses rather than flats. So the right to buy has reduced the supply of family houses and altered the balance of council housing stock in the country.

9 The Future of Council Housing

Local councils are now faced with a stock of older houses and they will continue to need a large programme of investment to keep them up to date. With changing tastes and prefences, accommodation that is no longer suitable or acceptable to tenants will need to be replaced. Many councils were saddled with housing debt and this combined with restrictions on investment has effectively brought a halt to new building by councils themselves. Council housing has increasing become a residual housing tenure, providing home for only the very poor, homeless and those with no alternative form of accommodation. This process of residualisation can be traced back through government policy - to the 1930s - the mid 1950s and confirmed by Conservative governments since 1979. Generally there has been a retreat from council house provision and a curb on housing expenditure along side measures to encourage the private sector.

Improvement and regeneration have become priorities. Housing providers now have an obligation to bring all their homes up to the set ‘decency’ standard by 2010 and to ensure that no-one is disadvantaged by where they live. New funds have been available from central government for a succession of regeneration programmes, they were however often conditional on transferring the management of their housing stock to housing associations or RSLs. This option has been widely taken since the 1990s as the nations stock aged and maintenance costs rose The process is known as stock transfer and was introduced in the Housing and Planning Act 1986. Already a quarter of local housing authorities in the country are no longer landlords – they do not have specific responsibilities such as rent collection or repairs and maintenance however they remain in law the local housing authority with the responsibility of providing a strategic and community leadership within their locality.

The make up and demographic of council estates have changed in tenure and appearance since their beginnings. The impact of the right to buy has turned the former council estates into mixed tenure areas, where tenants and homeowners live side by side. Some cities display a polarisation between the more successful council estates peppered with Right to Buys and less popular estates where a greater sense social deprivation is apparent.

Today the social rented sector (a combination of council and RSL managed housing) makes up 20% of the housing stock. The importance of provision of social rented housing in meeting housing shortage has diminished and government has placed more importance on its use as a safety net for vulnerable households. The country still has an overall strategic goal of providing decent affordable homes for its people and is proud to be one of the few countries in the world where specified groups, such as the homeless, have a legally enforceable right to housing.

The History of Council Housing
.
.
.
Posted by Jeremy Woodward at 15:33