Rewilding: the return of nature to Knepp

Isabella Tree and her husband Charlie Burrell have turned their estate at Knepp, which was once intensively farmed, over to a rewilding project:
Futures Forum: Rewilding Britain > restoring intensive farmland back to it's natural and uncultivated state - and becoming financially sustainable

Charlie Burrell is also chair of Rewilding Britain - and has written about their estate:

Knepp Castle Estate comprises 3,500 acres of heavy weald clay in West Sussex. Though farmed intensively since WW2, the farm rarely made a profit. Rewilding has turned this around. Knepp has attracted support from Natural England through the Higher Level Stewardship scheme. And its focus on rewilding has prompted successful spin off enterprises. The farmland is now profitable.

From the start, the project benefitted from the vision of an influential advisory group. This included the Dutch ecologist Frans Vera and CEO of Sussex Wildlife Trust, Tony Whitbread.

Knepp Wildland’s ethos is to allow natural processes rather than aiming for any particular goals or outcomes. Free-roaming grazing animals - cattle, ponies, pigs and deer - drive this process-led regeneration. They act as proxies for herbivores that would have grazed the land thousands of years ago. Their different grazing preferences help create a mosaic of habitats from grassland and scrub to open-grown trees and wood pasture.

These animals need minimal intervention. At low cost, they provide wild-range, slow-grown, pasture-fed organic meat for which there is a growing market. The fact that Knepp is still producing food – albeit extensively – has been a useful ally.

In just over a decade Knepp has seen astonishing results in biodiversity. It is now a breeding hotspot for purple emperor butterflies, turtle doves and 2 per cent of the UK’s population of nightingales.

Initial opposition to the project came from local people shocked at seeing the changing appearance of the land. This is waning thanks to these results. It still has problems to overcome - for example, common ragwort.

Knepp Wildland Safaris - a camping and guided safari venture started in 2014 – is proving popular with the public.

The Times has just reviewed it: 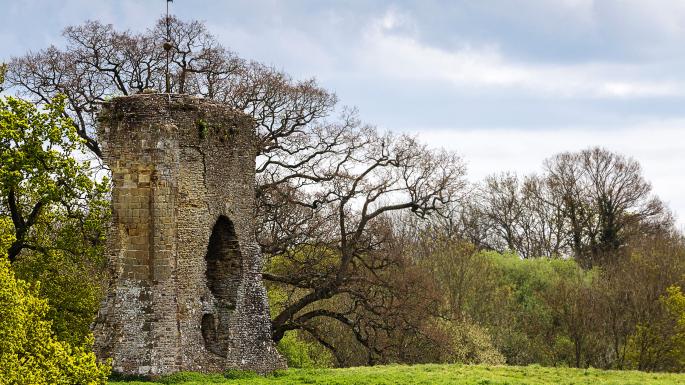 The Knepp estate is in deepest West Sussex: ALAMY

It was a conversation about mycorrhizal fungi, and worries about money, that set Isabella Tree and her husband, Charlie Burrell, on course to create what must be one of England’s largest ever — 3,500 acre — “amateur” experiments. In 2000, the couple, who farmed the Knepp estate in deepest West Sussex, sold off everything from tractors to ear-tagging pliers, sheep hurdles to semen flasks, and decided to let nature take over.

The result? An outcry at such a messy, heretical — possibly dangerous — idea from many members of the public, and within years a joyful abundance of wildlife including the return of many rare species.

The estate now “fizzes” with wildlife. Deer with “blackened, urine-stained bellies” roar and paw at the earth; nightingales pour out their “discombobulating” tunes; and, to the especial delight of Tree, turtle doves who fly 3,000 miles from West Africa have chosen to make landfall on their estate. Yet turtle doves are nonetheless predicted to be extinct in the UK by 2020.

All this is fertile territory for a book. It is also particularly timely, as Britain leaves the European Union and we are forced to reconsider who pays for the custodianship of the countryside.

“One of British conservation’s most conspicuous failures in the 20th century has been to concentrate on individual species to the neglect of ecosystems,” Tree writes. She views the Knepp estate, with constrained pride, as a focal point for debate about some of today’s most pressing problems: the impact of climate change, flooding, food production, pollution, human health. Tree also delivers broadsides at the “excruciating process of civil service decision-making”.

It means her impassioned account of almost two decades of turning conservationist is lighter on the personal memoir side and heavier on the ecological arguments than it might be. Indeed the statistics form wild thickets of their own. Nevertheless, this is an excellent primer, and anyone who is interested in how we share the planet — what it looks like, what we eat, and what nature can teach us — should read this book.

Reivew: Wilding: The Return of Nature to an English Farm by Isabella Tree — an experiment in letting nature take over | Culture | The Sunday Times

See also:
Futures Forum: Wilderness vs farming: How can we produce enough food for both humans and life on the planet to survive?
Futures Forum: Making space for wildlife > offsetting, rewilding or making half the planet a nature reserve
.
.
.
Posted by Jeremy Woodward at 01:00