Plans for Port Royal: BREAKING NEWS: All three offers for the Drill Hall propose refurbishment rather than demolition

The bids for what to do with the Drill Hall have been looked at:
Futures Forum: Plans for Port Royal: Drill Hall bids to be considered

And news has just broken that these will be presented at the next District Council Cabinet meeting - as covered in the Rescue Sidmouth Drill Hall site:

The 3-Rs group has also broken the news: 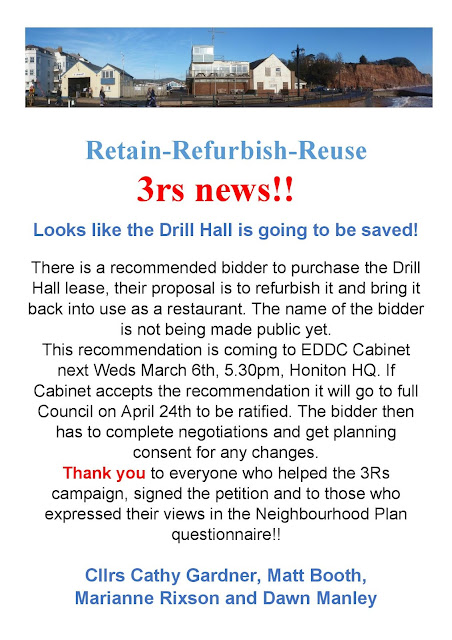 Revive Port Royal for all | a community initiative
Drill Hall | Save Our Sidmouth
Futures Forum: Plans for Port Royal: an alternative view: a new campaign: an online petition > The '3Rs' vision to "retain, refurbish and reuse" > website, blog, videos

And the Herald gives more information this evening:

The front of the drill hall has been called untidy and a mess by resident Dave O'Connor.

Sidmouth’s Drill Hall looks set to become a restaurant, after the first details of the bids to take it on were revealed.

East Devon District Council (EDDC) received three commercial offers for the redundant building, with each submission proposing a restaurant or bar as part of the application.
Offer two, which has been put forward by an unnamed ‘established’ South West brand, has been recommended for selection by a core group and will be discussed at EDDC’s cabinet meeting next Wednesday (March 6).
Members will vote to allow senior officers to enter into negotiations with the approved bidder about the disposal of the Drill Hall site and the neighbouring toilet block – on the basis a replacement facility is provided.
The bidders behind offer two have restaurants in several Devon towns and in Exeter and propose to ‘sympathetically refurbish’ the Drill Hall with some alternations to include a balcony and terrace area.
The report said: “This offer would be expected to draw people into the town based on their name/reputation. They have been a catalyst elsewhere where their presence has turned around parts of town centres.”
The offer would be subject to planning and licensing approvals being secured, and would consider incorporating the toilet block into the site as the negotiation process went forward.
All three offers were considered by a group made up of town and district councillors and officers, who weighed up the price and quality of each of the bids.
The quality of the bid, which made up 60 per cent of the assessment, was assessed based on financing, delivery of the proposal, governance and outcomes.
Offer one was submitted as a two-phase development, starting with refurbishing the hall to be run as a family business, offering a bar or restaurant – employing four full time staff and up to 10 part time employees.
The second phase would look at the Port Royal area over the course of 10 years.
A land swap rather than cash was offered for the Drill Hall site.
The third offer proposed a community function room, with a pop-up restaurant in the basement, living space on the ground floor and office space on the existing first floor.
In an alternative offer, the applicant proposed the ground floor would be used as a restaurant or for community use, with planning permission to create a new first floor for chef or owner accommodation.
The council’s cabinet will discuss the recommendations next Wednesday (March 6) before final approval is given at April’s full council meeting.