The District Council has been investing in clever bins:

Solar powered ‘big belly’ bins will clean up Sidmouth seafront, cut costs – and even allow internet access so passers-by can learn about the town.

The district council has invested in 21 waste compactors for across East Devon, but with a capacity eight times that of a wheelie bin, finance bosses say they will pay for themselves.

The receptacles have a covered access point touted as seagull-proof and will one day broadcast wi-fi so the authority can share information on its services and resort attractions.

The system could also bring in advertising revenue to cut costs further.

Councillor Iain Chubb said: “This new type of bin is a very exciting departure for East Devon because they have so many benefits rolled into one deal. Not only do they reduce the amount of street furniture but they also limit scavenging by gulls and other pests. In these austere times, the ability to improve the service without increasing our overall budget is a definite win-win.”

From Wikipedia, the free encyclopedia 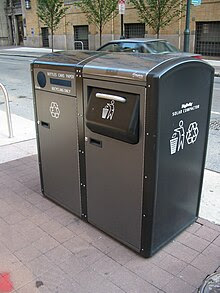 Trash compactor and recycling bin in center city Philadelphia, PA
BigBelly is a solar powered, rubbish-compacting bin, manufactured by U.S. company BigBelly Solar for use in public spaces such as parks, beaches, amusement parks, and universities. The bin was designed and originally manufactured in Needham, Massachusetts by Seahorse Power, a company set up in 2003 with the aim of reducing fossil fuel consumption. The first machine was installed in Vail, Colorado in 2004. Other locations to since use the bin includeBoston, Massachusetts; Chicago, Illinois; Baltimore, Maryland; Philadelphia, Pennsylvania;Ventura, California; Oakland, California; Queens, New York; Aberystwyth; and Aberdeen, Scotland. Due to the bin's commercial success, Seahorse Power changed its name to BigBelly Solar.

The bin has a capacity of 567 litres. Its compaction mechanism exerts 5.3kN of force, increasing the bin's effective capacity by five. The compaction mechanism is chain-driven, using no hydraulic fluids. Maintenance consists of lubricating the front door lock annually. The mechanism runs on a standard 12 volt battery, which is kept charged by the solar panel. The battery reserve lasts for approximately three weeks. Wireless technology-enabled units report their status into the CLEAN (Collection, Logistics, Efficiency and Notification system) dashboard that gives waste management and administration insights for monitoring and route optimization. BigBelly Solar also provides companion recycling units that allow cities, parks and universities to collect single-stream or separated recyclable materials in public spaces.


Coming soon to a street near you: 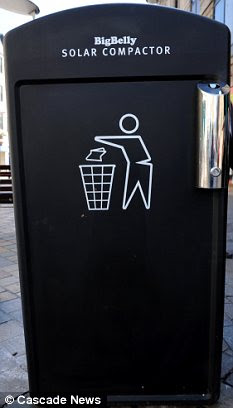 +2
Hi-tech: The Big Belly bin is fitted with solar panels, a rubbish compactor and a computer

The humble rubbish bin may be about to enter the 21st century, if a hi-tech model currently being trialled proves a success.
The 'Big Belly', a computerised, solar-powered bin which costs £3,200, is hitting the streets of Inverness.
The futuristic model can take eight times as much rubbish as a normal bin of the same size.
Machinery inside the bin compacts litter automatically, and an internal computer is programmed to send an email to the council when the bin needs to be emptied.
Eight hours of daylight per month is enough to power the bin's electronic devices, as well as the metal compressor which crushes rubbish at regular intervals.
The high-tech bins are made by Irish company Kyron, and have previously been trialled in various towns in Ireland, as well as in Devon's seaside resorts.
Highland Council has now agreed to start a four-week trial of the Big Belly, and will place the bin outside the Inverness branch of McDonald's.

The city's provost Jimmy Gray described litter as the scourge of Inverness, and said that the Big Belly could be a 'big help'.
The new bin's sealed lid stops seagull and other vermin from scavenging, and the massive capacity of the bins, as well as the warnings they send out when they become full, should prevent overflowing. 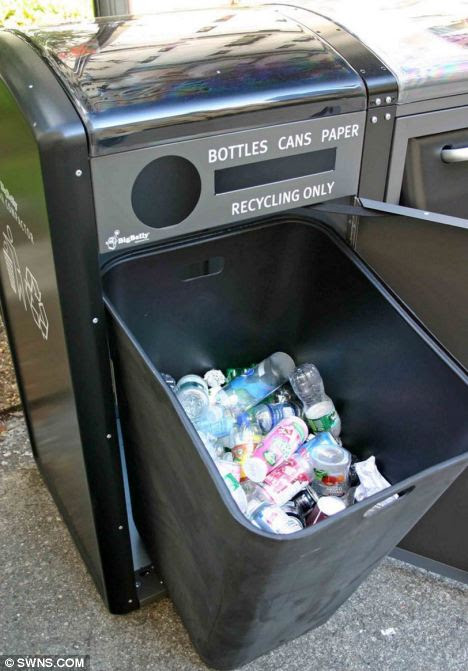 
Another council official pointed out that the bin could reduce the burden on workers, as they would not have to empty bins so frequently.
Unison, one of the unions which represent cleaners, said it would expect to be informed of the implications for workers of the introduction of these automated bins.
The council will consider replacing all of Inverness's 50 public bins with the Big Belly after the trial ends next month.

Coming soon to a street near you: the solar-powered bin that even sends emails | Mail Online
Is this the world's most hi-tech bin? Solar-powered device costs £1,000 a year but councils think it could SAVE them money | Mail Online
.
.
.
Posted by Jeremy Woodward at 16:36