Lobbying report postponed to October: the District Council, the planning code of conduct ..... and the East Devon Business Forum

The issue of 'lobbying' in East Devon has been an ongoing subject of debate.

This entry plotted the debate up to February this year:
Futures Forum: District Council meets to consider issue of Lobbying ... Weds 26th February

And the debate has continued ever since - in East Devon and beyond:
Futures Forum: "What is lobbying?"... "Openness and transparency is vital."

The Standards Cttee decided on 8th April to ask for a report to be prepared and for the issue to be looked at again:

At the Council meeting on 26 February 2014, Members agreed that a motion on lobbying be referred to the next meeting of the Standards Committee for clarification and debate.

"Openness and transparency in the planning process is vital. This Council therefore agrees to include an item on the agenda of all Development Management Committee and Planning Inspections Committee meetings, requiring Members of those committees to declare if and who they have been lobbied by, about items on the agenda."

Councillor Douglas Hull had proposed that the motion be referred to the next meeting of the Standards Committee to discuss and clarify its intention.

The Committee was advised that there had not been sufficient time to prepare a report for this Committee meeting and that it would be referred to the June meeting.

Members’ views were invited on what should be included in the report.

Members discussed the definition of lobbying at length and the proposal that an agenda item be added to the agendas of Development Management and Planning Inspections Committee requiring Members of those Committees to declare if they had been lobbied. It was suggested that the report to the Committee should include the guidance already available to Councillors, for example in the Council’s constitution, and it should be explored whether any other authorities provided additional guidance on lobbying in relation to the planning process.

RESOLVED: that a report on lobbying, specifically in relation to Councillors and the planning process, be brought to the next Committee meeting.

However, the issues still appear unclear within the District Council
- and the debate has gone rather quiet.

The situation was explained yesterday on Cllr Claire Wright's blog:

Friday, 06 June 2014 0 Comments by Claire
An EDDC report on lobbying over planning applications that was going to be debated at the next standards committee meeting, has been delayed until October.

The report was in response to a motion I lodged at February’s full council meeting, proposing that councillors on the planning committee declare whether or not they had been lobbied on a planning application.  Here’s the account of the debate, which seemed caused widespread bafflement among the conservative group - http://www.claire-wright.org/index.php/post/but_what_is_lobbying_confusion_breaks_out_over_motion_to_encourage_greater
The thorny subject, which has been beset by delay after delay, was referred to the April standards committee for consideration.
Officers at the April standards committee meeting then agreed to prepare a report on lobbying over planning applications for the June standards committee meeting - account here - http://www.claire-wright.org/index.php/post/more_lobbying_definition_confusion_but_report_returning_to_standards_commit
However, the report has now been delayed by four months, to come before the October standards committee, as officers say they are awaiting new guidance on the planning code of conduct, from Lawyers in Local Government.
The standards committee meeting on 17 June has now been cancelled.

Meanwhile, the Overview & Scrutiny's Task and Finish Forum (or 'TAFF') on the East Devon Business Forum has been indefinitely postponed:

Members of the Forum need to defer consideration on any employment land issues until the new planning inspector has completed his work. 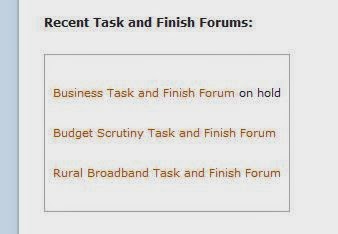 Although, last week's cabinet meeting did refer to the EDBF:

AND MORE FROM THIS PACKED-FULL AGENDA! A REFERENCE TO THE EAST DEVON BUSINESS FORUM!

Business Space Review – As part of the redevelopment of the Council’s Heathpark site, the East Devon Business Centre will be vacated. In preparation for this, Cabinet agreed in April to review.

Its approach to the provision of business space and support across the district.
EDDC currently provides business units across the district comprising office and workshop space in a variety of locations. The question of succession to EDBC [they mean EDBF, of course] has given us the opportunity to look again at how we can help meet the needs of business into the future in a world of enterprise and entrepreneurism very different to that when the Heathpark Business Centre first opened its doors.

Lead members for business and officers have carried out a tender exercise and interviewed four different consultancies. The chosen company, Carter Jonas, will begin their work shortly, gathering evidence over the next few months and report back their findings and recommendations by September 2014 at the latest.

And more from this packed-full agenda! A reference to the East Devon Business Forum! | East Devon Alliance