The State Of Britain's Butterflies >>> Dramatic declines can be reversed as a direct result of targeted conservation work.


The State Of Britain's Butterflies

Every five-years or so, Butterfly Conservation and its partners publish a ‘state of the nation’ assessment of the UK’s butterflies. Drawing from our world-leading recording and monitoring schemes, these influential reports set out the key results for butterfly species, highlight the implications of recent research and policy initiatives, and make recommendations for the conservation of UK butterflies and wider biodiversity.

The news is not very good:
Butterfly Conservation - 40 year slump for UK Butterflies

As reported in the national press:

Steep decline of our native butterflies: Numbers of more than three-quarters of UK species have gone down in past 40 years due to declining habitats

More than three-quarters of the UK's butterflies have declined in the last 40 years, with some common species suffering significant slumps, a major study has found.
Some 76 per cent of the UK's resident and regular migrant butterflies declined in abundance, occurrence or both over the last four decades, the State of the UK's Butterflies 2015 report found.
The deterioration of suitable habitats due to agricultural intensification and changing woodland management are seen as major causes of the decline.
Decreases of butterflies found in the wider countryside are less well understood, and it is believed climate change and pesticides may be playing a more harmful role in their declines than previously thought. 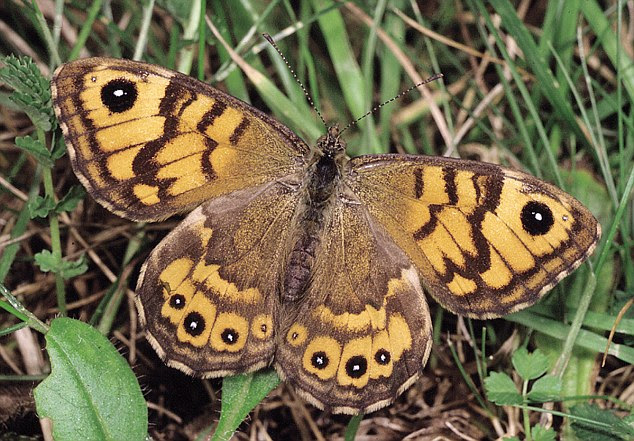 +3
At risk: The Wall butterfly, which was one of the UK's most widespread species but that now ranks among the most severely declining butterflies in the UK 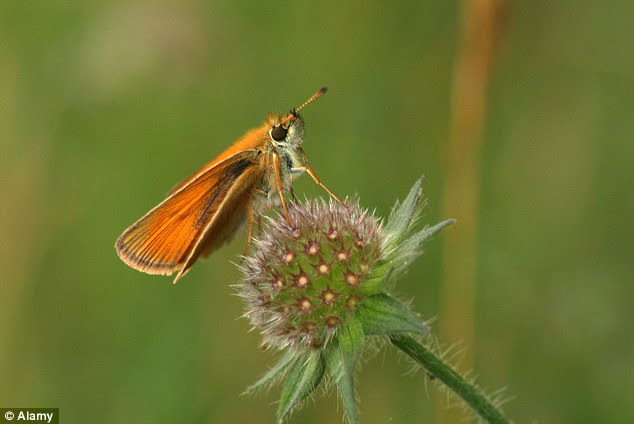 +3
The deterioration of suitable habitats due to agricultural intensification and changing woodland management are seen as major causes of the decline. Pictured, the Essex Skipper
Richard Fox, of the charity Butterfly Conservation, said the situation was 'stark'.
The report, by charity Butterfly Conservation and the Centre for Ecology and Hydrology, found that a number of widespread species such as the Wall, Essex Skipper and Small Heath now rank among the most severely declining butterflies in the UK.
The findings also reveal that intensive conservation efforts have started to turn around the fortunes of some of the UK's most endangered butterflies.
During the last 10 years the numbers of the threatened Duke of Burgundy have increased by 67 per cent and the Pearl-bordered Fritillary has experienced a 45 per cent rise in abundance.
Dingy Skipper and Silver-studded Blue have shown 21 per cent and 19 per cent increases in occurrence respectively.
Even the UK's most endangered butterfly, the High Brown Fritillary, has been relatively stable in the last decade.
But despite breakthroughs with some threatened butterflies, the report revealed that other species continue to struggle.
The long-term decline of the Wood White, White Admiral and Marsh Fritillary show few signs of stopping.
The report found that some previously common and widespread species have become a cause for concern.
Yet again we are presented with sobering evidence that our much-cherished wildlife is in dire straits.
Chris Packham, vice-president of charity Butterfly Conservation
The Wall, once a common farmland butterfly across southern Britain, has suffered a 36 per cent fall in occurrence and 25 per cent drop in abundance since 2005, continuing a longer trend of decline.
One of our most abundant species, the Gatekeeper, has experienced a 44 per cent decline in abundance in the last decade, and numbers of the Small Skipper have been below average in every year of the 21st century.
The report also reveals a North-South split among butterflies of the wider countryside, with species in England declining and those in Scotland showing no long-term trend.
Less severe habitat damage in the North and the differing geographical effects of climate change are believed to be behind the split.
The report reveals that more butterflies are reaching the UK from overseas. Since the 1970s the three common migrant species - Clouded Yellow, Red Admiral and Painted Lady - have all increased dramatically in abundance.
In the last few years rare migrants such the Scarce Tortoiseshell and Long-tailed Blue have arrived in huge numbers.
Chris Packham, vice-president of charity Butterfly Conservation, said: 'This report reveals that UK butterflies are in real trouble. Yet again we are presented with sobering evidence that our much-cherished wildlife is in dire straits. 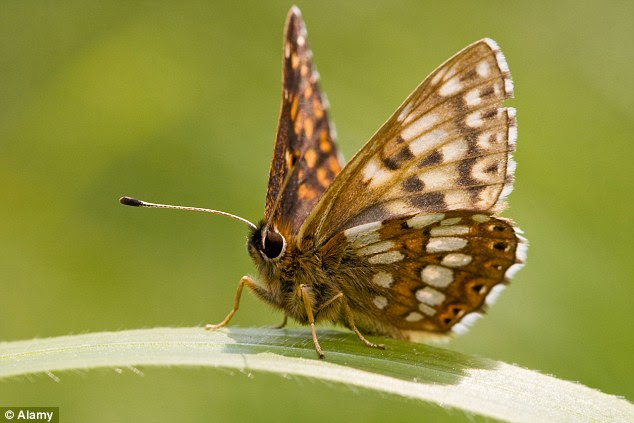 +3
During the last 10 years the numbers of the threatened Duke of Burgundy (pictured) have increased by 67 per cent and the Pearl-bordered Fritillary has experienced a 45 per cent rise in abundance
'As a society we are guilty of standing idly by as once common species, never mind the rarities, suffer staggering declines. This is a situation that should shame us all.
'The future of the UK's butterflies does not have to be bleak. This report shows conservation work can and does turn around the fortunes of our most threatened butterflies.'
Richard Fox, lead author of the report and Butterfly Conservation's head of recording, added: 'Thanks to tens of thousands of people who help to count butterflies in the UK each year, we have a clear picture of the changing fortunes of these captivating insects.
'Overall the situation is stark. Most butterflies have decreased since the 1970s and an alarming number of common species have declined severely.
'On the other hand, trends over the past decade provide grounds for optimism and show that our approach to conserving threatened butterflies can stem and even reverse declines.'
David Roy, who led the Centre for Ecology and Hydrology's contribution to the report said: 'We've used sophisticated analyses for this latest report, revealing major declines.
'This is of great concern not just for butterflies but for other wildlife species that share the same habitats. The findings act as a barometer of the overall state of the environment.'
The report comes from data gathered by two long-running citizen science projects - the Butterflies for the New Millennium recording scheme and the UK Butterfly Monitoring Scheme.

State of the UK's Butterflies 2015 report shows decline of our native insects | Daily Mail Online
.
.
.
Posted by Jeremy Woodward at 16:18