We throw away tonnes of phones every year as the new models emerge: 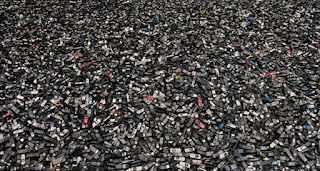 Futures Forum: Planned Obsolescence: and The Men Who Made Us Spend

This is an problem for the reputation of the likes of Apple:
Futures Forum: The increasing importance of managing 'reputation' >>> from East Devon to Volkswagen
Futures Forum: Of climate change, recycling and the right to repair >>> "being environmentally aware is crucial for the of reputation of Apple"

Especially as these gadgets contain a considerable amount of 'blood minerals':
Futures Forum: Conflict minerals in your gadgetry > the blood and sweat in phones and batteries

Including stepping up its recycling:

Daisy, Apple's recycling robot, has been hard at work

iPhones and other electronics are traditionally difficult to recycle (Photo: Apple)

Materials stripped from old iPhones by Apple’s recycling robot are making their way into the company’s new products for the first time.

The robot, christened Daisy, dismantles 1.2m iPhones each year in an effort to retrieve 14 valuable metals and materials, including gold, cobalt, aluminium and tin, some of which are now being reintroduced to Apple’s production lines.

Cobalt retrieved from old batteries are used to create new batteries in a range of Apple products, and salvaged tin is used in the solder on the main logic boards of 11 different devices, according to the company’s annual Environmental Responsibility report.

Aluminium housing recovered from old Apple products retrieved from Apple’s Trade In programme has been remelted and used to make the latest MacBook Air, which went on sale at the end of last year.

Apple declared its intention to one day manufacture all future products using only recycled and renewable materials in 2017, and said it diverted more than 48,000 metric tons of electronic waste from landfill last year.

More than 7.8m Apple devices were refurbished in 2018, which would have been put up for resale on the company’s website.

iPhones and other smartphones contain precious and valuable metals, including gold, silver, aluminium, copper and tungsten, and rare earths such as terbium, yttrium, lanthanum, neodymium, gadolinium and praseodymium.

Extracting metals and other components from electronics during the recycling process is notoriously problematic, as environmentally-unfriendly chemicals and smelting methods are often used to break down electronics during extraction.

Daisy can recover materials traditional recyclers cannot at a higher quality, and is currently operational in the Netherlands and Texas in the US, Apple said.

Around 50m metric tons of electronic waste (e-waste) is predicted to have been generated throughout 2018, rising at a rate of 5 per cent per year, according to Statista.

Materials stripped from recycled iPhones are being used in new Apple products - inews.co.uk
.
.
.
Posted by Jeremy Woodward at 09:09