Following debate on the Cabinet's Relocation Update minute at the last full District Council meeting, it was unanimously resolved:

that a thorough examination of all facts and figures in respect of the relocation be carried out by:
a) The Audit and Governance Committee
b) The Overview and Scrutiny Committee
c) The internal auditors
d) The independent external auditors

And indeed, one of these bodies will be meeting shortly to consider the relocation project:

Councillor Peter Bowden, Vice Chairman of the Audit and Governance Committee advised (in the absence of the Committee Chairman) that the relocation of the Council offices was to be discussed at the Committee meeting on 8 January 2015. The issue was in respect of good governance and not political opinion.

However, there have been concerns voiced that this process will not be 'thorough' enough:
Futures Forum: Knowle relocation project: 'The EDDC Conservative group should have made the need to protect East Devon countryside and the need to deliver an adopted Local Plan its top priority. Instead it has put all its energy and a huge amount of financial resource into building itself new offices'
Futures Forum: Knowle relocation project: "The prudent thing to do is put everything on hold."

The District Council's website gives details of one of these four bodies:

The Council, in common with local government as a whole and many other public bodies, is required to maintain an internal audit function. The requirement is set out in the Accounts and Audit Regulations 2003 which specify that: "A relevant body shall maintain an adequate and effective system of internal audit of its accounting records and of its internal control..."
Internal Audit are an independent function who report to the Audit and Governance Committee and Managers on the findings from their annual reviews over the key operations and services of the Council to provide assurance that key risks are managed effectively and that no losses or fraud have occurred.  They also look to add value through providing recommendations to improve performance and efficiency.
Internal Audit is provided under a service agreement with the South West Audit Partnership (SWAP). Details of the services that SWAP provides is on the www.southwestaudit.gov.uk website.
East Devon District Council - Internal Audit

However, there has been some disquiet expressed as to the effectiveness of this body - as highlighted in this blog a year ago:
Futures Forum: Transparency and process in East Devon... a summary

This was in the light of the SWAT being asked to consider the District Council's own systems following on from the resignation of former Cllr Graham Brown:

This summer independent auditors scrutinised East Devon District Council’s governance proceduress at the request of the Audit and Governance Committee. The audit looked at the procedures and checks in place at the council to make sure they are robust enough so if there ever were any perceived conflicts of interest, whatever they may be, they would be identified. Auditors and were satisfied with these.

Council checks and balances are ‘robust’

EDDC offices at Knowle in Sidmouth. Photo by Simon Horn.
An independent financial watchdog has given the district council’s own rules and safeguards a clean bill of health.
But there are concerns because the audit report has been stamped confidential - and some councillors have been refused a copy.
District bosses had called for the South West Audit Partnership to scrutinise their internal processes following the resignation of a councillor who claimed he could influence planning decisions. Councillor Graham Brown, who also runs a planning consultancy, was caught on camera by Daily Telegraph reporters.
But despite it not being illegal for elected members to work as consultants, the audit and governance committee had wanted it on the record that their procedures and controls, with regard to councillors, were ‘suitably robust.’
But the report, which was completed in July, has been marked confidential and only a summary of the key findings have been released.
The report confirmed that the authority had a ‘robust complaints procedure’, meetings were ‘transparent’, councillors declared their personal interests and all council decisions were recorded. It also concluded that councillors were given ongoing ‘clear guidance and training’ on their roles and responsibilities, especially with regards to the Code of Conduct.
A council spokesman said: “In light of the widespread publicity about the alleged activities of a former member of the council… to satisfy the council that it does indeed have the right checks and balances in place to be able to demonstrate best practice, SWAP was tasked with including an independent review of these within its latest audits. The finding of that review was an audit opinion giving ‘reasonable assurance on the adequacy of the council’s control’ in this area – which is audit speak for ‘good’.”
An extract from the report reads: “...the activities of one councillor were drawn to senior management’s attention by an outside source. The council took appropriate action in relation to this matter and the councillor has now resigned. “This review included a review of councillors’ declared interests and of the complaints procedures.”
Councillor Claire Wright questioned why the report was kept comnfidential. She has since been told it will be made public.
Council checks and balances are ‘robust’ - News - Exmouth Journal

However, many observers were unhappy with this analysis:

A dozen or so members of the public turned up at today’s EDDC Audit Committee meeting which considered the “anti-corruption audit” produced for them by South West Audit Partnership (SWAP) following the resignation of Graham Brown.

They will have been deeply disappointed by a mediocre piece of back-covering ‘reassurance’ about the “robustness” of the council’s controls against councillors behaving badly.

According to the Report there was a “low risk” of any serious problems with councillors’ behaviour, and “no findings” of any conflicts of interests in councillors’ – and officers’- involvement with organisations such as the (now disbanded) East Devon Business Forum.

The depressing conclusions to take away?

1. The “independent” audit was a box-ticking exercise based on paperwork provided by officers , proving that controls exist. What they don’t seem to have investigated was whether the controls have been effective.

2. SWAP acknowledged that it hadn’t looked at evidence from the public about alleged councillors’ activities, nor at the formal complaints to the Monitoring Officer before the scandal erupted.

3. The remit of the audit was decided between senior officers whose work was being inspected, and auditors, with no reference to concerned councillors or –God forbid!- members of the public.

4. The auditors felt that criticism of the report from some councillors and public resulted from ignorance of the sophisticated methods used in auditing!

5. A SWAP senior auditor was indignant that any suggestions could possibly be made that his organisation which includes EDDC as a partner, and has Council people on its Board, could be anything less than totally independent.

6. The committee members were quite happy with this anaemic audit , and with one or two honourable exceptions, had nothing searching to ask about a report whose “recommendations” are almost risibly inadequate to the task of restoring trust in a Council whose reputation is seriously tarnished .

Full marks to the Man from SWAP who attempted to answer public criticisms, even if he couldn’t turn a pig’s ear into silk purse. And to Chairman Ken Potter who treated public questioners with courtesy and indulgence. A pity that Cllr Tony “Diviani-is- too-transparent” Howard, persuaded him to curtail a dialogue between auditor and public.

In conclusion the Monitoring Officer, said she thought that the report ,which praised her role, was “good”.

And all of this was within the context of a report on auditors and public bodies which came out in October 2013: 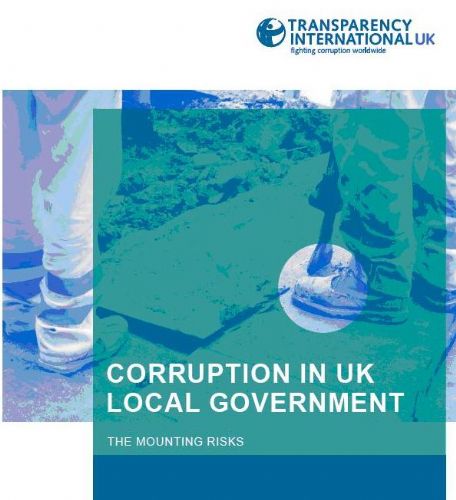 Transparency International’s report 'Corruption in Local Government: The Mounting Risks' warns that an unintended consequence of recent changes, such as those made in the Localism Act and the Local Audit and Accountability Act, may be the creation of an enabling environment for corruption.

The report notes that experts hold widely different views about the scale and prevalence of corruption in local government, but there was general consensus that recent changes would increase the risk of corruption happening in future.

It identifies sixteen recent legislative changes which increase the risks, as well as other trends such as the decline in scrutiny by local press and the move to more private sector out-sourcing. This report includes twenty-two recommendations, including that the Government should conduct a corruption risk assessment and strengthen whistleblowing procedures.

For a visualisation of some of the statistics, please visit our Pinterest page here.