You could get a free cookbook:
Veganuary? The 28-day cookbook that could be lifestyle changer - BelfastTelegraph.co.uk

Devon Live looks at where to try some vegan food:
Here's 11 vegan-friendly restaurants in Devon to try this Veganuary - Devon Live

And the Guardian looks at the campaign:

Year of the vegan? Record numbers sign up for Veganuary 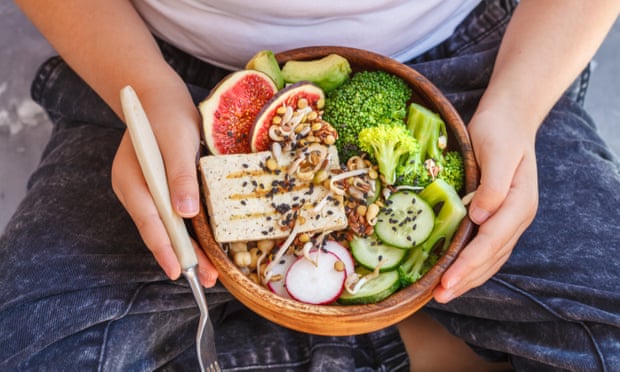 As the hangovers kick in and promises are made at the end of the festive season, more and more people are committing to making a lifestyle change that may require stronger willpower than, say, going to the gym more than once in the first month of the year.
Record numbers have signed up to “Veganuary” and will try living on a plant-based diet, at least for a few weeks. With vegan options becoming cheaper, and more widespread and convenient, organisers of the initiative believe 2019 will be the year of the vegan.
Since the movement started five years ago, participant numbers have more than doubled each year and a total of more than 250,000 people in 193 countries have signed up. Rich Hardy, head of campaigns at Veganuary, said that on Sunday alone 14,000 people pledged to go vegan for the first month of 2019 – a rate of one every six seconds.
“In 2018 there hasn’t been a week that has gone by without veganism hitting the headlines, whether it is a magazine editor being fired or Waitrose launching a new range of products,” Hardy said. “Vegan products are getting a lot better and it is becoming a lot more convenient to have a tasty plant-based diet.”
He suggested stark warnings from scientists about the environmental cost of meat had persuaded many people who would not previously have considered veganism to give it a try.
In May, scientists behind the most comprehensive analysis to date of the damage farming does to the planet declared that avoiding meat and dairy products was the single biggest thing an individual could do for the environment.
Joseph Poore, of Oxford University, who led the research, said: “A vegan diet is probably the single biggest way to reduce your impact on planet Earth – not just greenhouse gases but global acidification, eutrophication, land use and water use. It is far bigger than cutting down on your flights or buying an electric car.”
According to the supermarket chain Waitrose, a third of UK consumers say they have deliberately reduced the amount of meat they eat or removed it from their diet entirely. One in eight Britons are now vegetarian or vegan, and a further 21% say they are flexitarian – where a largely vegetable-based diet is supplemented occasionally with meat.
Chris Packham is among the celebrities to sign up to this year’s Veganuary, while the Tory MP Andrea Jenkyns and Green party peer Jenny Jones have joined the ranks and the Labour MP Kerry McCarthy, a committed vegan, has called on other parliamentarians to take the pledge.
Many regard 2018 as the year that veganism moved out of the realms of counter-culture and into the mainstream. Hardy said that while vegans and veganism were sometimes portrayed as judgmental and exclusive, movements like Veganuary aimed to be as fun and inclusive as possible.
Like all New Year resolutions, sticking to veganism can be tricky, but Hardy urged those who try it not to worry unduly. “If you fall off the wagon, you fall off the wagon,” he said. “Just pick yourself up, remind yourself why you signed up to the pledge in the first place and start afresh. It is meant to be fun and enjoyable.”
Year of the vegan? Record numbers sign up for Veganuary | Life and style | The Guardian
.
.
.
Posted by Jeremy Woodward at 01:00