How should the English countryside look in future?.............. "It's mad that we protect the countryside (where hardly anyone lives) and cram buildings into every nook and cranny in the cities which are already rammed full."


There has been a lively debate on the comments pages of the BBC - which has just reported on the government's consultation on "how the Common Agricultural Policy should shape the future of farming and the rural economy in England."

How should the English countryside look in future? 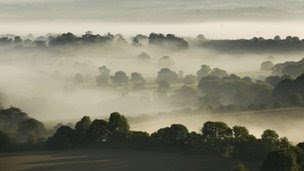 People are being asked to offer their views on how the English countryside should look.
The government has opened a consultationon the priorities for spending nearly £20bn of EU subsidies over the next seven years.
The budget has been cut overall and there is huge controversy about how it should be shared between helping farmers and protecting wildlife.
The decisions will have an impact on hedgerows, trees, wild flowers, birds, bees, water quality and the appearance of the landscape.
An EU settlement in the summer has given individual nations more discretion on how to spend funds.
Some countries want to prioritise direct help for farmers, but the UK government says farmers should have to earn their cash as much as possible by working in a way that benefits the environment.
'Significantly disadvantaged'

Ministers want to divert the maximum amount of 15% into rural development and green schemes.
They aim to help hill farmers and to create shelter for pollinators, such as bees and moths.
But this has worried big farmers, who they say they will lose out and get less direct payment than some of their European counterparts.
The National Farmers' Union (NFU) president, Peter Kendall, said: "English farmers are already significantly disadvantaged in comparison with their near neighbours in the EU."
Environmentalists are not happy either. They argue the government's plans have failed to ensure that whole landscapes are farmed in a way that safeguards water quality and the environment.
Helen Perkins from the Wildlife Trusts said: "We need to see farming for nature mainstreamed - with environmental standards raised on every farm so that exemplary practices aren't restricted to pockets of the countryside."
Campaigners are perplexed that the government has given the public just 28 days to respond to the consultation on an immensely complex reform.
Scotland, Wales and Northern Ireland have their own processes over farm budgets.
Follow Roger on Twitter @rharrabin
Your comments (538)

This entry is now closed for comments
Jump to comments pagination

Comments 5 of 6
Sign inwith your BBC iD, or Register to comment and rate comments
BBC News - How should the English countryside look in future?

The UK ensured that we have choices in how we implement the Common Agricultural Policy, rather than having to work with a one-size-fits-all approach from the European Commission.
This gives us the flexibility to target funding in ways that will deliver real benefits to the environment, boost the competitiveness of our farming industry and grow the rural economy. It’s vital that the new system is designed with the input of the people whose lives it will affect. That’s why it’s so important that people give us their views on how we can best achieve this.

Defra is inviting input into the design of a straightforward system that is effective, easy to follow and avoids the significant fines charged to UK taxpayers under the current Common Agricultural Policy.
The consultation responses will also shape the future of the Common Agricultural Policy in England, particularly with regard to transferring up to 15 per cent from the budget for payments made directly to farmers to payments to improve the environment and projects to improve farm competitiveness and boost economic growth. This is subject to evidence from the consultation that additional funding in these areas would prove value for money.
The consultation is wide ranging in its scope:
Responses to the consultation can be made:
Defra will also host social media debates and regional engagement events (including workshops) which will inform the formal consultation. More information on workshops being held around the country and how to register your interest

Common Agricultural Policy: how will it affect you? - News stories - GOV.UK

See also: Consultation: how should the English countryside look in future? | Sidmouth Independent News
.
.
.
Posted by Jeremy Woodward at 08:40