There has been a rather unfortunate back-story to the current situation in Feniton:
Futures Forum: Does not having a new Local Plan or Land Supply in place leave East Devon vulnerable to development?
Futures Forum: Policy-makers and the Public

And now the village is to face a 'super inquiry'.

This is the FFFF homepage:

The Planning Inspectorate has agreed with EDDC that the fate of Feniton’s green spaces should be heard at one giant Super Inquiry. This event will take place in the Bowling Club starting at 10.00 on Tuesday 4 January 2014, and will run for two weeks.

Watch this space for the latest news on time and place.
The Inquiry will hear submissions from each developer (Wainhomes, Strategic Land Partnership and Feniton Park Ltd) who, between them, are trying to build up to 235 more houses in the village. Feniton residents will be welcome to come and express their views at the start of each day’s proceedings.

A public meeting to discuss this major threat to Feniton’s way of life is being held at Feniton Primary School on 4 November 2013 at 7.30 p.m.


And this is the report of the meeting in yesterday's Express & Echo:

An East Devon community is rising up against the will of developers in a fight to ensure their rural village doesn’t increase by almost half.
Around 180 people packed into the primary school hall at Feniton, near Honiton last night, to hear about a so called Super Inquiry when a Government planning inspector will hear the appeals by three developers for a total of up to 235 houses.
The parish council in Feniton, which has long been beset by flooding mainly due to over flowing drains, called the meeting for residents to have their say ahead of the two-week inquiry scheduled for January.
All three developers had their applications rejected by East Devon District Council’s Development Management Committee but are now appealing against the local authority’s ruling. They include, Wainhomes, who want to build 83 homes near Louvigny Close, Feniton Park Ltd, who are vying for 32 at Acland Park and Strategic Land Partnerships who want either 59 pr 120 on land west of Ottery Road.
And yet as part of East Devon District Council’s emerging Local Plan document, which outlines where thousands of homes could be built over the next decade, Feniton is allocated just 35 houses.
If all the three developments are granted on the back of the inquiry, the village of Feniton would increase by 40 per cent.
Wainhomes is currently building 50 houses at Louvigny Close. Although councillors initially rejected their application, the developer won the right to build on appeal.
Feniton Parish Council has been awarded the right to take a full part in the inquiry but needs to raise £10,000 to pay for legal representation.
Last night’s meeting was also an opportunity to raise the funds needed and as a result residents were “queuing up” to contribute.
“There were so many people who wanted to come to the meeting not everyone could fit in the hall,” said district Councillor for Feniton, Susie Bond. “Residents are spitting feathers about what’s happening here, everyone’s so angry about what’s happening they were queuing up to pledge their support. It was extraordinary, just amazing.”
In March hundreds of campaigners throughout East Devon a protest against the Government’s controversial plans to relax planning laws, fearing it will flood the countryside with houses.
More than 250 people gathered at the demonstration which was organised by the East Devon Alliance campaign group, in opposition to the Government’s National Planning Policy Framework (NPPF) in which their is a “presumption in favour of sustainable development”.
“It’s really hard for people to understand exactly what’s happening in Feniton,” continued Cllr Bond. “The problem is that the NPPF doesn’t give a maximum size a place can increase to.”
Monday’s meeting was chaired by parish council chairman, Martyn Smith. He added: “Feniton has been under siege from developers for well over two years now. Increasing the village by 40 per cent is not a sustainable option, given its woeful infrastructure. We are suffering as a result of decades of appalling planning decisions and regular flooding which leaves sewage flowing in the streets and people’s houses. Feniton is the last place developers should be trying to build housing estates and it’s time to call a halt. The Parish Council is taking a full part at the Inquiry, and will be defending the village by resisting large-scale, inappropriate development.”

Feniton Parish Council and Fight for Feniton’s Future jointly hosted a meeting of residents to discuss the Super Inquiry into three developments totalling up to 235 houses in the village. 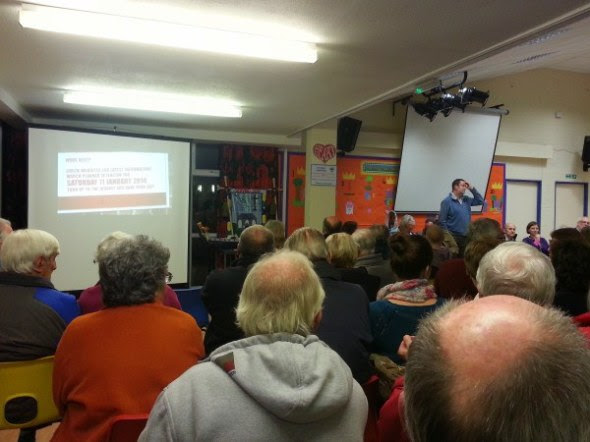 The Super Inquiry will start on 7 January 2014 at 10 a.m. in Feniton Bowling Club and will see Wainhomes, Feniton Park Ltd and Strategic Land Partnership argue their case for mass development ahead of the adoption of the Local Plan which allocates just 35 houses for Feniton.
This scenario is being played out across the country in the one third of councils which do not have their Local Plan in place. BBC Spotlight reported on the situation in Feniton ahead of the meeting (available on BBC iPlayer for one day only,http://www.bbc.co.uk/iplayer/episode/b03gf6kg/Spotlight_04_11_2013/, but check Fight for Feniton’s website http://theffff.wordpress.com/, where it should be available soon). Under the latest planning laws (the National Planning Policy Framework) rushed through by the Coalition Government against mass opposition from campaign groups, including the CPRE, developers can build almost anywhere, as long as it’s deemed ‘sustainable’.
And that’s the crux of the matter.
At last night’s meeting, the sustainability (or lack thereof) of Feniton was debated at length. Dr Claire Horrocks, a university lecturer in sustainability, was on hand to explain what constituted sustainable development and despite its complexity as a subject, it can be summed up as:
Sustainable development is development that meets the needs of the present, without compromising the ability of future generations to meet their own needs.
The issue of sustainability will be thrashed out at the Super Inquiry in January by barristers on each side of the argument. Feniton Parish Council will be playing a full part in proceedings and residents pledged large sums of money to help defray the costs of legal advice. I don’t think I have ever seen so many people queuing up to offer their hard-earned cash to the cause of their village, such is the strength of feeling locally.
For a full report of the meeting, see Claire Wright’s blog: http://www.claire-wright.org.

And a report from County Councillor for Feniton, Claire Wright:

Over £2000 pledged by Feniton residents for fighting fund
Claire | Tuesday, 05 November 2013
comments (2)
There was a sense of wartime spirit at yesterday evening’s Feniton Parish Council meeting, as residents rallied together against the threats to the village and pledged more than £2000 to a mass development fighting fund.

Many residents were clearly very angry about the way in which their village is being targeted, and determined to do their bit, whether it be putting up posters or helping to collect money.
Around 180 people attended the meeting, which was jointly hosted by campaign group, Fight for Feniton’s Future.  It was chaired by Feniton Parish Council chairman, Cllr Martyn Smith.
BBC Inside Out were filming the meeting as part of their programme about the village’s battles with flooding and development. The programme is expected to be aired in January. Earlier in the evening BBC Spotlight carried a live broadcast from the village, including interviews with Fight for Feniton’s Future chair, John Withrington, Cllr Martyn Smith and Jayne Blackmore, who spoke about the horrors of being repeatedly flooded.
The pledges were being gathered to put towards legal fees of £10,000, for a legal planning consultant to assist the parish council with its case at the inquiry.
Three developers and their barristers will be arguing to build 235 houses in the village. It would clearly be extremely hard to fight such an inquiry without any legal representation. I have pledged £1000 from my locality budget (after checking that this was allowable under the scheme) and Cllr Susie Bond has pledged £250.
Cllr Smith explained the process for the inquiry and said that MP, Neil Parish, is fully supportive.  He urged people to attend the appeal.
John Withrington, chair of Fight for Feniton’s Future, mentioned developer claims about the silent majority being in favour of major development. There was much derisory laughter at this.  Feniton was supposed to receive 35 houses. The outcome of the “super appeal” was of interest not only to Feniton, but all of East Devon and even the country, he said.
Cllr Susie Bond told residents about the EDDC local plan and about the oft used term of “sustainable development,” which has no clear definition in planning terms since the new government planning guidance was published, the national planning policy framework.  The local plan examination in public takes place in February, which is very unfortunate timing, she said.
Residents made many points, including:
- there is a declining train service, particularly since the advent Cranbrook, which has meant a poorer service for Feniton
- one university student said she had to get up at 4am to get public transport to university
- Feniton Primary School and King’s School are both over capacity and there are many more houses being built in other parts of the area
- there is a positive sense of community in Feniton and this might be compromised if Feniton grew much bigger
- the importance of retaining high quality agricultural land for food production
- the problems of sewage bubbling up around the road drain covers
The owner of the local hairdressing salon offered to have a collection tin in her shop ... and suddenly everyone was talking about posters. Many people indicated that they want to display poster to demonstrate that they were going to fight mass over-development of the village.
One of the developers has said that the “silent majority” at Feniton would be happy to see it grow much bigger. I hope that the developer concerned had a spy at last night’s meeting because I think I can say with considerable authority that the majority of Feniton are most certainly very opposed to the village growing by 40 per cent - and they are far from silent about it!
The appeal inquiry will start on Tuesday 7 January and is expected to last around two weeks.  It will be held at the Bowling Club, in the Old Village.  Feniton residents - please attend whenever you are able to.
To download a poster visit the Fight for Feniton’s Future website here - http://theffff.wordpress.com/

Comments
1. At 12:47 pm on 05th Nov Susie Bond wrote:
I’m still buzzing after the meeting last night. ‘Wartime spirit’ pretty much sums it up. Feniton is literally under attack ... but Feniton is fighting back.
If anyone doubted the level of opposition to these mass developments, last night’s strength of feeling proved them wrong.
Feniton is a Devon village and should not be growing by more than the 5% allocated under the draft Local Plan.

2. At 05:14 pm on 05th Nov Sandra Semple wrote:
If all those people against development put posters in their windows they may find they are the not-at-all silent majority.
I would urge the parish council to contribute to legal costs - they ARE empowered to do this.