The PassivHaus: cheaper than you think to build.... and only £20 annual heating bills.....

This appeared in today's Guardian:

Actively cutting energy bills in Oldham – welcome to the 'Passivhauses'

A Passivhaus looks like any other home, but it's not, thanks to a box of tricks in the loft that's helping residents' health and wealth 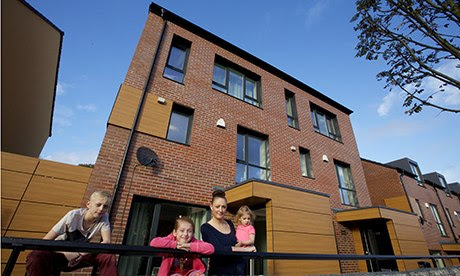 Justine Hutton and her children at their passive house ('Das Passivhaus') in Oldham. Photograph: Christopher Thomond
As the first bitter autumn wind whips off Crompton Moor, pensioner Inez and her son David, who live below in the Lancashire town of Oldham, have the heating on high and the double-gazed windows of their three-bedroom house tightly shut.
They have just paid £550 for the gas they used over the three summer months and each time the bill goes up, life in their 1960s pre-cast concrete terrace house gets harder. This winter they expect to have to choose between warmth and other necessities. 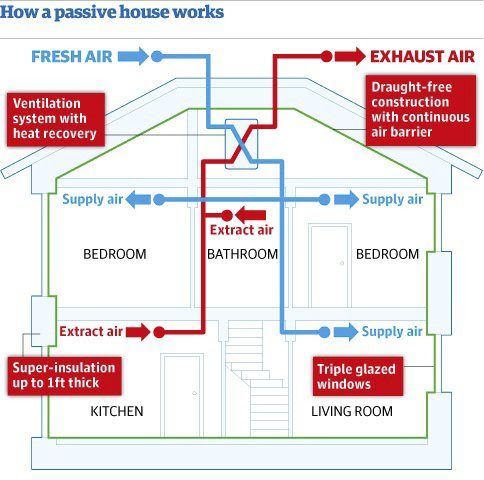 Fifty yards round the corner in St Mary's Close, Justine Hutton and her two children Kieran and Alissia watch TV in T-shirts in a similar-sizedproperty. The single radiator is cold and they have a window open, although the temperature inside is 21C. The family will only pay around £20 to heat their home for the whole year. The only heat source is their bodies and the electric cooker.
Inez's house is one of nearly 7m in Britain that have uninsulated solid walls and are little more than cold boxes. But Justine's is one of Britain's very few "Passivhauses" – super-low energy buildings (the German name translates literally to "passive houses"). It's packed with insulation, is triple-glazed and looks like any other new home, except for a box of tricks in the loft which uses warm air sucked out of the kitchen and bedrooms to heat fresh air being sucked in.
"I'd never heard of a Passivhaus and I don't know anything about climate change," says Hutton, who is about to start work as a healthcare assistant in Oldham hospital. She pays social housing group Contour £97 a week to rent the house which costs £95,000 to build.
"I Googled it but I was still sceptical. But it's great. There are no draughts and it's quiet. I was in a freezing council house which I used to pay £35 a week to heat, way more than 10% of our income, and it was still cold. It was horrendous what we were paying and it was a breeding ground for illness. They should definitely build more like this". 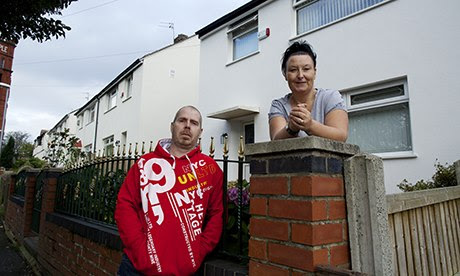 Alison Isaacs and her husband Darryl-Paul outside their home in Oldham which has been insulated in a scheme expected to save the council and NHS hundreds of thousands of pounds. Photograph: Christopher Thomond
Nigel Banks, sustainability director of regeneration group Keepmoat, which has built this and nearly a third of Britain's other low-energyhomes, said: "We have found that we can build a three-bed Passivhaus for only about £20,000 more than a normal house, not the £50,000 extra that government thought when it relaxed building standards."
The St Mary's development of 93 houses stands on old back-to-back Victorian streets which were demolished in the 1960s to make way for concrete-built flats which quickly deteriorated. The £14.8m scheme, which is paid in part with energy company "green levy" funds, has two Passivhauses and four other "Code 6" ones, which have enough insulation and solar energy to keep heating costs to about £3 a week.
"Britain can now build really low-energy houses massively cheaper than it could just a few years ago. But it's frustrating because the government has rolled back the building standards. If the green levy is dropped, then thousands of people in Oldham and elsewhere will stay cold and ill and it will cost the NHS dearly," says Banks.
One mile away in Fitton Hill, Oldham council, a large housing group and Oldham NHS Clinical Commissioning Group (CCG) are investing £200,000 between them to retro-fit 1,000 cold homes with new boilers and exterior insulation. The health service calculates it will save £300,000 a year in reduced hospital admissions and social costs, and the council hopes each household will save around £450 a year. Each home also draws on energy company green levy money.
"Oldham is a cold town. It has got poorer health than most of the country. There's not much money about. Around one in five, or 20,000 homes here, are in fuel poverty," says Alan Higgins, director of Oldham council public health.
"We think each person lifted out of fuel poverty will save the health service about £250 a year. Data suggests there are 20% more deaths in Oldham in winter than in summer because of extra respiratory illnesses and heart problems [linked to cold homes]. If you get a cold winter and people cannot heat their homes, you get more people turning up in A&E and suffering."
Spray-painter Darryl-Paul Isaacs and his wife Alison say they saw a difference in health soon after the building work was done. Their son, Darryl-James, 12, is badly asthmatic and they are both prone to depression and other illnesses.
"It takes the pressure off us financially and mentally," says Darryl-Paul. "There's no work round here. We'd normally take him to the doctor at this time of year. Not now.
"It's the stress. Sometimes he has to go to hospital for a nebuliser. As a parent if you can go a night without worrying that he'll have another attack and have to take three days off school, you feel better."
"We were paying about £450 a quarter for heating and the house was freezing. We had to sacrifice lots of things. A 10% rise in energy bills this year would definitely have pushed us over the edge."
"Energy price hikes really hurt here, especially with single elderly people," says Peter Beck, a building surveyor with Keepmoat. "There is no way you can lift someone on a pension of £7,500 a year out of fuel poverty. Developments like this would just not happen without the green levy."
The council and hospital will monitor the scheme over a year to try to measure the health benefits to people escaping fuel poverty. "Addressing it is definitely the right thing to do. But it's not just about economics. The cost of fuel is going up out of all proportion to people's ability to pay. It's about the quality of a life, too," says Denis Gizzi, director of Oldham NHS CCG.

By The Economist Intelligence Unit, an Energy Realities Partner
How can governments and energy companies overcome the hurdle of engaging consumers?

On a hill overlooking the campus of the University of Nottingham, seven pilot houses showcase different versions of the future energy-efficient homes that the University’s Department of Architecture and Built Environment’s Institute of Sustainable Energy Technology has erected in partnership with utility and construction companies.
One two-bedroom structure, the state-of-the-art Nottingham H.O.U.S.E. (Home Optimizing the Use of Solar Energy), was designed and built by the department’s students with the sponsorship of Saint Gobain, a construction manufacturer and supply chain company.
Known as the Timber House, the building is constructed out of eight individual modular units and features photovoltaic panels, gray water recycling from the shower for use in the toilets, and air-tightness membranes to keep the structure draft-free, including compartmentalized living spaces to keep heat loss to a minimum. Designed according to the world’s most stringent design codes—the German Passivhaus Institute and UK Code for Sustainable Homes Level 6, or zero-carbon—the building’s physics approach to design enables the house to regulate its temperature, making it essentially self-heating, with just a small top-up heat pump required to keep it warm.
The potential represented by the Timber House underlines the importance of getting the design of the building right from the beginning, says Professor Mark Gillott, chair in sustainable building design and co-director of the Institute of Sustainable Energy Technology at the University of Nottingham.
“What we are talking about is well-designed ventilation and draft-free structures,” he adds, noting that the energy consumed by the UK’s housing stock is responsible for around 27% of the country’s carbon emissions.