Peak Oil: 10 Years After 'The Party's Over': an interview with Richard Heinberg

Rob Hopkins of the Transition Network has recently interviewed Richard Heinberg of the
Post Carbon Institute | Leading the transition to a resilient world and author of The Party's Over: Oil, War, and the Fate of Industrial Societies :

10 Years After 'The Party's Over': an interview with Richard Heinberg 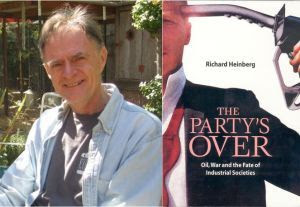 While running the risk of sounding like a Hello! Magazine reporter, I must introduce this post by saying that while in the US recently, I joined Richard Heinberg and his wife Janet in their beautiful permaculture garden in Santa Rosa, California.  Richard will be known to most readers of this blog as the author of The Party's Over, Powerdown, The Oil Depletion Protocol, Peak Everything, Blackout and Snake Oil as well as one of the best communicators on the whole peak oil/everything question.  This year marks the tenth anniversary of the publication of The Party's Over.  Richard has already reflected on this in September's Museletter, but Richard and I pulled up a chair under a tree in his garden and chatted more about the book, its impact, and other related issues.  You transcript follows below, or you can listen to or download the podcast below.
So Richard, it’s 10 years since The Party’s Over came out, which is certainly a book that turned my life upside down and the lives of many others, I suspect.
I have a lot to answer for, I’m afraid…
This guy came up to me at an event I was at recently in Austin, and said “I read your book 4 years ago and after I read it, I gave up the really well-paid job I had and I moved into a falling down house.” I thought, my God he’s going to burst into tears! But it was a story that ended well. What’s your sense, looking back on that book, knowing what we know now and how things have changed through the explosion of unconventional stuff, how well, looking back after 10 years do you feel that the analysis set out in that book has held up over that time?
Since it is the 10 year anniversary of publication, I actually went back and read the book for the first time in years. I was actually quite pleasantly surprised. In the book, although I cite the analysis of a number of different people, theorists if you will, the two people whose work rely upon most are Colin Campbell and Jean Laherrère. If you read carefully what they were saying in 1998, and the next few years, what’s actually transpired since then is essentially exactly what they were forecasting. 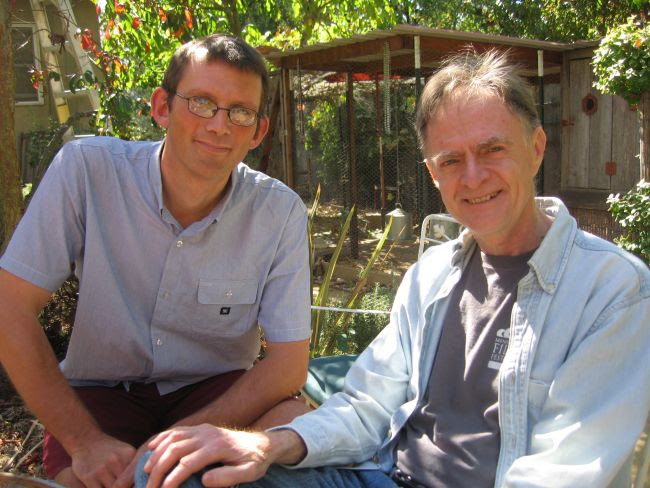 Richard Heinberg and Rob Hopkins in Richard's garden, Santa Rosa.
They were forecasting a peak in regular, conventional oil around 2006 or so, which is exactly what we’ve seen. Yes, crude oil production has increased in the last few years, but all of the increase has been in tar sands or tight oil from North Dakota and Texas. If you take that out of the picture, oil production today is below what it was in 2005-2006.  So that’s correct.
And they went further and said this would cause price increases which would incentivise more production of unconventionals. They didn’t specifically say we’re going to get more oil out of North Dakota, but how specific do you need? To my interpretation, what they were describing was exactly what we’ve been living through over the last few years. We’ve seen higher and more volatile oil prices, the oil industry is spending twice as much on exploration and production and yet producing very little more oil. They’re drilling twice as many wells and the 10 top oil companies have seen their actual production decline by about 25 % in the last decade. So if this isn’t peak oil I don’t know what is.
Now it’s true, there are some peak oil commentators who were saying that the result would be an almost immediate global economic crash and there’d be riots on the streets and mass starvation and so on before 2010, and that hasn’t happened. But if you pick up The Party’s Over and read it, there’s nothing in that book that would make such a claim.
The idea that the ‘party’ is over that’s so strong in the book, there seems that the book has motivated lots of people for whom the working assumption is that the party’s over, but our leaders are still desperately clinging to the fact that the party is revivable and is about to start swinging again with great gusto, based on this obsessive push for growth and what it takes to make that happen. What’s your take on this scale of denial or over-optimism that is gripping our leaders at the moment?
I wouldn’t characterise their attitude as one of optimism. I think their attitude is veering more and more toward desperation all the time, but it’s a failure of imagination. They cannot imagine a Plan B. The only definition of success in their lexicon is more economic growth as in what we saw during the mid-20th century. Of course, that’s just not on the cards. That presents an impossible situation for them. All they’ve managed to do so far is – and here it’s not only governmental leaders but also heads of central banks – to create a few years of fake economic growth through massive deficit spending and quantitative easing and so on.
That’s staving off economic collapse, but it’s certainly not capable of returning us to the glory days of easy economic growth. I think there’s a general understanding that this can’t go on forever, that there are inherent problems to deficit spending and central bank enlargement of the balance sheets of the Federal Reserve. That can’t go on in perpetuity, but what else do they do?
I described this in one recent essay as fingers in the dyke. With unconventional oil and with quantitative easing and deficit spending, we’re managing to maintain a façade of normality, at least for a large segment of the population. Certainly not for everyone, because every year more and more people fall off the edges of the table. But at what price, in the long run? The longer we try to maintain this false normality, the higher the cost in the end. The worse the crash will be once these back stops fail.
The latest book you’ve written, Snake Oil, has been looking at the whole fracking explosion, which in the UK has been a thing that the government is grasping on to, assuming that the same thing that can happen in the US can happen in the UK, and that’s how the economy is going to be got going again. But you argue there that actually fracking is a bubble, a very dangerous bubble. Could you tell us a bit more about that? 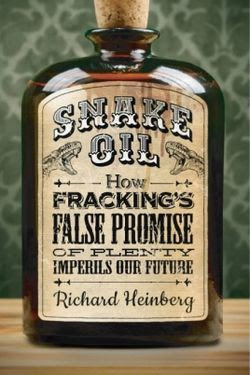 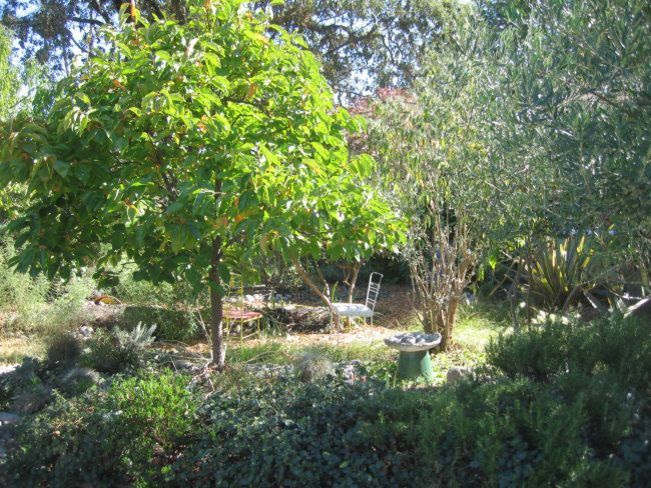 Richard and Janet's garden.
It’s a little extreme, isn’t it?  We’re sitting here in your very beautiful garden with fruit and nuts…you’ve been writing about this stuff for 10 years and been one of the world’s foremost analysts of these issues. How does Richard Heinberg’s daily life reflect those things? You’re quite clearly not one of those academics who is able to just study something and then have a life that completely doesn’t reflect that. How does all of that appear in your daily life?
My wife, Janet and I have spent more than 10 years, probably more like 20 years trying to develop as much self-sufficiency and ecological sanity in our lives as possible. We’re proud of what we’ve done so far but at the same time we’re painfully aware of what we haven’t done and what’s really hard to do.
We just have to content ourselves with what we can do. We’re happy to have friends and neighbours who are supportive and we try to encourage them also and work with them on all sorts of interesting local efforts like creating community energy and so on. Is it enough though?  But at the end of the day, we have to do what we can and enjoy life. This life is a gift and we don’t know how many days of normal life we have. Being with friends and family, playing music, being out in the garden, spending time with nature, this is not something to take for granted.
My last question is now, looking back 10 years after The Party’s Over came out, and it’s been translated into lots of different languages, are you able to get a sense of its impact, of its legacy as a publication at this stage?
I wouldn’t want to try to be too bombastic about it. It’s one of a number of books about Peak Oil that have been written. I think it probably was one of the more influential ones, certainly it didn’t have the highest book sales and I think Jim Kunstler’s The Long Emergency sold two, three or four times whatThe Party’s Over did.
But I think The Party’s Over appealed to folks who were perhaps a little more open to or interested in a communitarian response to the Peak Oil crisis. I’ve met thousands of people over the past decade who are doing amazing things in their own lives and communities and I feel very happy to have had some positive influence.
Thank you. Well it certainly had an enormous impact on me anyway. And it had the best cover of any of the Peak Oil books as well! 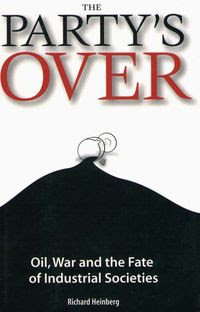 
10 Years After 'The Party's Over': an interview with Richard Heinberg | Transition Network

The Oil Drum | Discussions about Energy and Our Future