"Planning Minister Nick Boles said there was 'no excuse' for a local authority not putting a local plan in place."

But in a comment to this report, blame is apportioned elsewhere:
Nick Boles is absolutely wrong to be blaming councils for not having up-to-date Local Plans. It was his government's hasty and ill-judged decision to abolish Regional Spatial Strategies which has led to delays in plan preparation programmes.
House of Commons - Abolition of Regional Spatial Strategies: a planning vacuum? - Communities and Local Government Committee

Here is some recent commentary on the issue of the Regional Spacial Strategies:

Eric Pickles, secretary of state for communities and local government, has announced his intention to revoke the old housing targets, put in place by the Labour government.
This is significant because although the south west regional spatial strategy (RSS) was never adopted, it proposed 17,100 houses for East Devon, a massive hike from the 11,400 RSS housing target for the district, that was published just two years previously in 2006.
There has been continuing rows about using this evidence base with which to pin our new housing levels in the new draft EDDC Local Plan.  Planning inspectors have said that in the absence of new data, the RSS data is the most up-to-date.
But this negates the 2011 census data, which appears show evidence of a growth more in line with the 2006 RSS housing target, than the inflated 2008 data.  Both sets of RSS data are based on Office of National Statistics projections.  Seven years later and that data is looking very out-of-date and new adjusted Office of National Statistics data is expected out shortly, based on 2011 census data, which shows actual trends rather than projected trends.
The story in Planning Resource is here - Pickles announces revocation of final three regional plans | Planning Resource

Wednesday 30 March 2011
Julian Glover's article about the "uglification of Britain" and the coalition government's desire "to break the stranglehold of a system that is bad at planning but good at shackling development" (Comment, 28 March) would have been greatly strengthened by reference to a recent report from the communities and local government select committee.
This warned the government that its plans to abolish regional spatial strategies (RSSs) will leave a vacuum at the centre of the English planning system that is likely to have profound social, economic and environmental consequences that could persist for decades.
Clive Betts MP Chair, CLG select committee
Letters: Planning a better future together | Politics | The Guardian

"I understand that East Devon District Council accepted their proposed total housing figure in the Secretary of State's Proposed Changes only challenging the distribution within the district. If the RSS is not adopted it will be for EDDC to decide how many homes it intends to plan for."


October 19, 2011
"The Government value the green belt highly. It is an essential planning tool to prevent sprawl, and its retention is a coalition agreement commitment. The abolition of the regional spatial strategies through the Localism Bill will stop the top-down pressure to review green belts in many areas. In future, local planning authorities will be in control. It is certainly not for central Government to decide where green belts should be...that is a matter for local authorities."
Devon MP makes empty properties call | Exeter Express and Echo

'No excuse' for councils on housing says minister 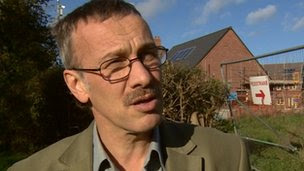 Planning consultant Gerald Kells said the government promised the new regulations would be 'planning-led'
Planning minister Nick Boles MP was in no mood to mince his words when I caught up with him on the Smith's Wood housing estate in Solihull the other day.
Councils had "no excuse", he told me, for not having their plans in place for their share of the extra homes that needed to be built in order to meet our chronic shortage of affordable housing.
"They need to get on with it," he said.
It could not have been a clearer signal of the government's determination to press ahead with their controversial relaxation of planning regulations in order to accelerate house building.
This is despite press speculation that as many as 30 Conservative backbenchers may be prepared to defy ministers over their controversial National Planning Framework (NPF), dubbed "a developer's charter" by its critics.
The NPF comes into the reckoning when local authorities fail to agree a plan for the required number of houses in their area.
'Brown fields are fantastic'
If the National Planning Inspectorate consider a local plan to be inadequate, they have powers to intervene over the heads of the locally-elected decision-makers.
Take the village of Gnosall in Staffordshire for example. The Stafford Plan envisages 600 new houses in 12 key service villages over 20 years. But, the planning inspector ruled that Gnosall did not have a five-year supply of housing.
Standing beside a new development of houses being built out into the fields bordering the village, the independent planning consultant Gerald Kells told me the government had promised the new regulations would be "planning-led". In practice, he warned, too much of the new housing was being built "ad hoc" by developers stampeding into the prime sites, usually green fields. 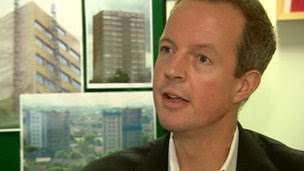 Planning minister Nick Boles MP said councils must have plans in place
But the newly-appointed shadow housing minister Emma Reynolds showed me what can be done, on a brown field site in her Wolverhampton North East constituency.
Akron Gate is a development of 300 new homes in an area which used to be part of the Goodyear tyre factory.
Emma Reynolds told me the whole project had gone through planning with no more than a handful of objections.
"Brown fields are fantastic," she said. Especially given her stated aim that a Labour government would double the present rate of house-building.
Meantime, the Conservative MP Caroline Spelman has been showing me another way of easing the pressure for housing developments in our cherished green spaces - her Meriden constituency might be renamed "Meriden Gap", so determined is Mrs Spelman to protect what remains of the open countryside between Birmingham and Coventry.
'People power'
Her constituency is home to one of the most ambitious housing regeneration projects ever seen.
She told me the £150m partnership between the Solihull Community Housing Association, Solihull Council and British Gas was creating new homes, rehabilitating old ones and delivering new jobs in an area that desperately needed all three.
But the umbrella organisation representing social landlords, including housing associations, warns that there can still be no substitute for a step-change in house-building, given the severity of the social crisis caused by the shortage of affordable accommodation.
Gemma Duggan, from the National Housing Federation, told me the most vehement opponents of new housing in their back yards were often the same people who complained that their children could not afford to get started in the property market.
The federation is campaigning for local authorities to "Say Yes To Homes". 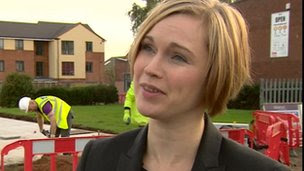 Gemma Duggan, from the National Housing Federation wants authorities to 'Say Yes to Housing'
No wonder this housing crisis has proved to be such an intractable problem for successive governments.
Labour proposed "eco-towns", including 6,000 new homes to be built in a development named Middle Quinton by the developers in the Warwickshire countryside outside Stratford-upon-Avon.
A determined display of "people power" saw thousands of protesters marching through the countryside and the whole idea was dropped.
Labour's other Big Idea, the Regional Spatial Strategy envisaged nearly 400,000 new homes to be built right across the West Midlands.
But that plan was scrapped by the incoming coalition government.
In its place comes, you've got it, the National Planning Framework.
This tale of missed objectives, climb-downs, u-turns and ministerial reverses may have a way to go yet.
For governments past, present and, perhaps, future, finding a plan to deliver affordable housing where it is most needed without igniting a firestorm of protest is the political equivalent of the Holy Grail.
Your comments (11)

Sign inwith your BBC iD, or Register to comment and rate comments
All posts are reactively-moderated and must obey the house rules.
Jump to comments pagination
Comments 5 of 11
BBC News - 'No excuse' for councils on housing says minister

Thanks to: Planning Minister says councils have no excuse for not having a Local Plan in place | Sidmouth Independent News
.
.
.

Posted by Jeremy Woodward at 14:56