Britain does not have the plants and infrastructure to recycle its own plastic waste, with the result tens of millions of pounds is spent sending our rubbish overseas.

The problem with plastic is that it ends up elsewhere:
Futures Forum: Plastic pollution: everything connects


CHINA’S ban on importing plastic recycling from the UK could cause “chaos” for local councils trying to perform bin collections, it is claimed.

On January 1, Beijing officially outlawed the practice, which had seen it accepting 7.3 tonnes of waste from the UK, US and Japan in 2016 alone. And there has already been a huge build up of plastic waste at UK recycling facilities this year in the wake of the move.

With most councils outsourcing their recycling to big firms, there are fears it could raise costs and lead to further cuts in bin collections. Chief executive of the UK Recycling Association, Simon Ellin, said radical action was required.

As reported in the Mail earlier this week:

Britain's 'recycled plastic' is dumped in landfill all over the world: Rubbish bearing names of UK supermarkets is found in Poland, Hong Kong and Thailand

Thousands of tons of plastic collected for recycling from British homes is being shipped and dumped on sites across the world. A huge amount of plastic rubbish is being sent overseas on the basis that it will be recycled and turned into new products.
However, much of it is being dumped or buried from Poland to Hong Kong and Thailand, according to a new investigation.
Every year British households throw 22 million tons of waste into the bin. Recycling rates have stagnated at some 44per cent and the UK is unlikely to hit a target of 50per cent by 2020. Britain does not have the plants and infrastructure to recycle its own plastic waste with the result tens of millions of pounds is spent sending our rubbish overseas. 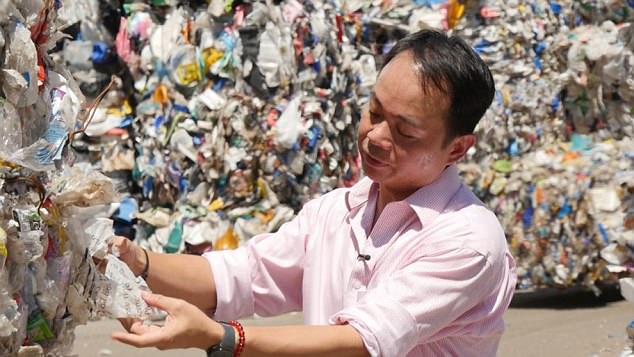 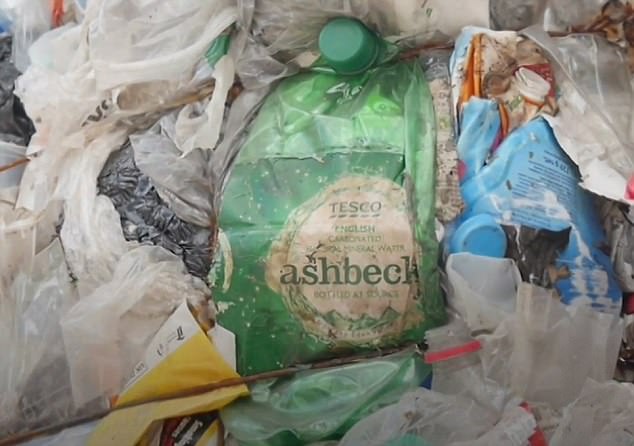 A water bottle from Tesco's in Britain washes ashore on foreign soil
Historically, much of it went to China but the Government there has recently imposed drastic restrictions with the result traders are looking for other countries to take it.
A documentary made by Sky News found shipments of plastic wrapped in Chelmsford Council recycling bags sitting on a yard in Hong Kong, destined for landfill.
Tony Wong, the Chinese plastics trader who had imported the plastic, expected to receive only clear bottles. In fact, the load was so contaminated with other materials, it was too expensive to sort and recycle. Steve Wong, who often works with Tony and is also president of the China Scrap Plastics Association, said there was ‘no other solution’ to deal with the waste than consign it to landfill.
The Sky News documentary, Dirty Business, found that the shipment has been registered as recycled by the exporter. As a result, it counts towards Britain’s recycling targets, so artificially inflating the true figure. The programme found that yet more plastics exported from the UK were falling apart and polluting the environment in Poland.
At one plastic-strewn site near Bangkok, Thailand, waste included Tesco and Asda milk packaging and a Whitworths raisins bag, which had apparently been there for over a year. 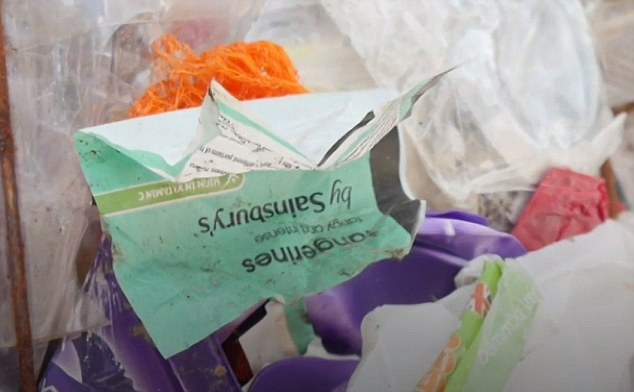 There was also waste from a tangerine pack which also washed ashore
More concerning still was the sight of workers stood knee deep in biohazard bags, processing them with their bare hands.
Historically, China imported millions of tons of plastic rubbish every year to make the toys, mats, and parts that it sells back to the rest of the world. However, much of the plastic was contaminated with rubbish and waste that meant it could not be recycled. As a result, these imports were dramatically curtailed from this month under a programme called ‘national sword’.
Phil Conran, chairman of the advisory committee on packaging for the Department for Environment, Food and Rural Affairs (Defra), said: ‘Operation national sword had a big impact in that it’s almost halved the amount of plastic going to China. That’s the problem we’ve got with China who are saying we don’t want this low quality stuff anymore. So China have closed their doors and we’ve going to have to find somewhere else.’
Environment Secretary Michael Gove told the programme that Britain has been ‘exporting too much waste’. Mr Gove, who is leading a Government initiative to cut down on plastic packaging, including bottles, said: ‘What we need to do is to make sure that we reduce the amount that we produce and also process more of it at home.’

But is working on it:
Asian nations make plastic oceans promise - BBC News
.
.
.
Posted by Jeremy Woodward at 02:58