Things are moving on other fronts, though:
May could consider tax on single use plastic packaging - Packaging News
Coffee chains under growing pressure to reveal true extent of plastic pollution | The Independent

LONDON, Jan 8 (Thomson Reuters Foundation) - A ban on plastic microbeads, used as exfoliants in toothpastes, face washes and shower gels that end up in the oceans, will come into force in Britain on Tuesday, but lawmakers said more needed to be done to tackle plastic pollution.

The tiny plastic beads pollute waterways and oceans, where they can be eaten by marine life and end up in the human food chain. A report by lawmakers in 2016 said the industry’s commitment to phasing them out was inconsistent and recommended a ban.

“Microbeads in cosmetics are an avoidable part of the problem, which is why we called for a ban,” member of parliament Mary Creagh, chair of the Environmental Audit Committee, a cross-party green watchdog, said in a statement.

“This is a step in the right direction, but much more needs to be done. Since we called for a ban, my committee has also recommended a deposit return scheme for plastic bottles, a latte levy for plastic-lined coffee cups and reforms to make producers responsible for their packaging.”

A deposit return scheme involves consumers paying a small deposit that is refunded when they return empty plastic bottles and is common in many parts of the world including Denmark, Germany and Australia. In Britain, the idea of a deposit return scheme for bottles has won the backing of two supermarkets, Iceland and the Co-op, the first major retailers to support the policy to promote recycling and tackle ocean plastic pollution.

A spokesman for the Department for Environment, Food and Rural Affairs (DEFRA) said last month the government “will be working with industry to explore how we can reduce the amount of single-use plastic waste.”

Eight million tonnes of plastic - bottles, packaging and other waste - are dumped into the ocean every year, killing marine life and entering the human food chain, says the United Nations Environment Programme (UNEP). If current pollution rates continue, there will be more plastic in the sea than fish by 2050.

In December, all 193 countries that are members of the United Nations signed a U.N. resolution to eliminate plastic pollution in the sea, a move some delegates hoped would pave the way to a legally binding treaty.

With the view from the plastic packaging industry:

The government is to unveil a crackdown on the UK’s “throwaway culture” this week as it mulls over an extension to the 5p charge for plastic bags. 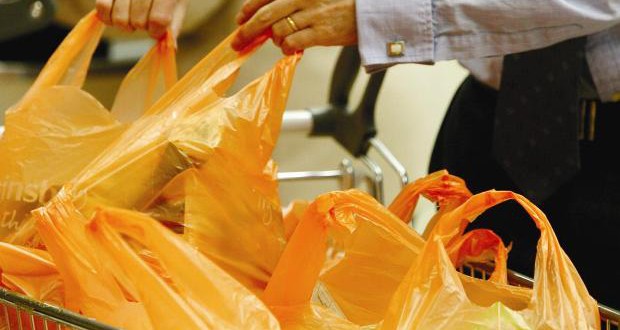 The move could mean that smaller retailers would have to implement the charge. Currently shops with fewer than 250 employees are exempt from the carrier bag charge. A consultation on the levy’s extension is expected. The government claimed that the 5p charge on single-use plastic bags had contributed to a 90% reduction.

Barry Turner, plastic and flexible packaging group director at the British Plastics Federation said: “I’m not surprised by this development. You couldn’t keep having the charge applying to some retailers but not all. It would be more sensible if the charge was applied to all materials – paper, for example, remains exempt. The question is what do they do with the funds raised? We think it will be an opportunity that will be missed as the money could be directed to help us with issues we all need to work on, such as the challenges of litter and the lack of on-the-go infrastructure.”

The executive director of the Foodservice Packaging Association, Martin Kersh, agreed that there should be a “level playing field” for the application of the charge and supported the elimination of the minimum retailer size threshold. He added that the same principle “must therefore be applied to the UK’s Packaging Producer responsibility system so that the threshold applicable is also removed to include all businesses placing packaging on the market, subject to being VAT registered”.

Kersh said: “We still stand by the arguments we put forward when the plastic carrier bag charge was originally proposed that an exemption for hot, ready to eat take-away food on hygiene grounds is fully justified. If such usage is not to be exempted then we urge government, in line with Food Standards Agency advice, to ensure the public is fully aware of the need to use a fresh clean bag when carrying ready to eat food.

Media reports have indicated that Environment Secretary Michael Gove told the cabinet on Tuesday that the government was “determined to tackle the throwaway culture which plastics encapsulate”.

It’s understood that Prime Minister Theresa May will deliver a speech tomorrow (Thursday, 11 January) marking the publication of the government’s 25 year plan, which will outline plans to tackle plastic pollution and single-use plastic.


Plastic bag charge to expand as the government outlines strategy

Indeed, as reported some five years ago, plastic pollution was always more than just the bags:
Plastic bags: symbol of consumer waste may ignore worse offenders | Environment | The Guardian
.
.
.
Posted by Jeremy Woodward at 12:41