"Although the cliff face at Pennington Point has experienced recent erosion, there is no immediate requirement for emergency works to be undertaken and that the town of Sidmouth is not at increased risk of flooding now or in the near future." [2009 Report]

This is in fact a 'national issue'...
Here is some context from the British Geological Survey:

Active coastal landsliding at Pennington Point was caught on camera by local resident, Eve Mathews, showing a dramatic series of rock falls onto the beach. Pennington Point lies just east of the town of Sidmouth on the south-east Devon coast. The landslide has been entered into the National landslide Database as ID 16367/1.

Falls began to take place began in February 2009 and continued during March. Due to the speed of this type of landslide, it very unusual to be caught on film and these images provide a rare insight into the process as it happens.

Landslides along this section of coast are common; another fall occurred nearby at Hangar Point around the same time. The famous Axmouth to Lyme Regis Undercliff lies just to the east, representing a 1 km stretch of coast formed entirely from ancient landslides. This stretch is particularly famous for the 1839 Bindon Landslide which attracted much public attention at the time. Sidmouth and Pennington Point are also part of the UNESCO Jurassic Coast World Heritage Site, which is important for its sequence of Triassic, Jurassic and Cretaceous rocks but also for its many large-scale landslides.

At more or less the same time, the District Council's consultants on Pennington Point published their report:

SUMMARY
Following meetings with Mark Reilly and Keith Steel of East Devon District Council regarding recent cliff falls at Pennington Point, we presented, by letter of 19th September 2008, our proposal for undertaking an assessment of the recent cliff erosion.

This assessment was to be brief, including recommendations for any work which might be appropriate. In 2009, following a meeting with representatives of the Town of Sidmouth, the Member of Parliament and the National Trust, the October 2008 report was revised to take account of a number of concerns, most notably the presentation of erosion rate information.

From this brief study, Royal Haskoning can confirm that although the cliff face at Pennington Point has experienced recent erosion, there is no immediate requirement for emergency works to be undertaken and that the town of Sidmouth is not at increased risk of flooding now or in the near future.

It should be noted that there is an inherent risk and safety concern associated with cliff faces of this nature, therefore in addition to the safety measures already implemented, it is suggested that periodic surveys should be carried out to monitor the erosion of the cliff and manage the health and safety risk

Attempts to 'have something done' at Pennington Point have been going of for some time now:


LEADER OF THE HOUSE

Today's Herald is asking members of the public to provide the Beach Management Plan steering group with any photos of before then: 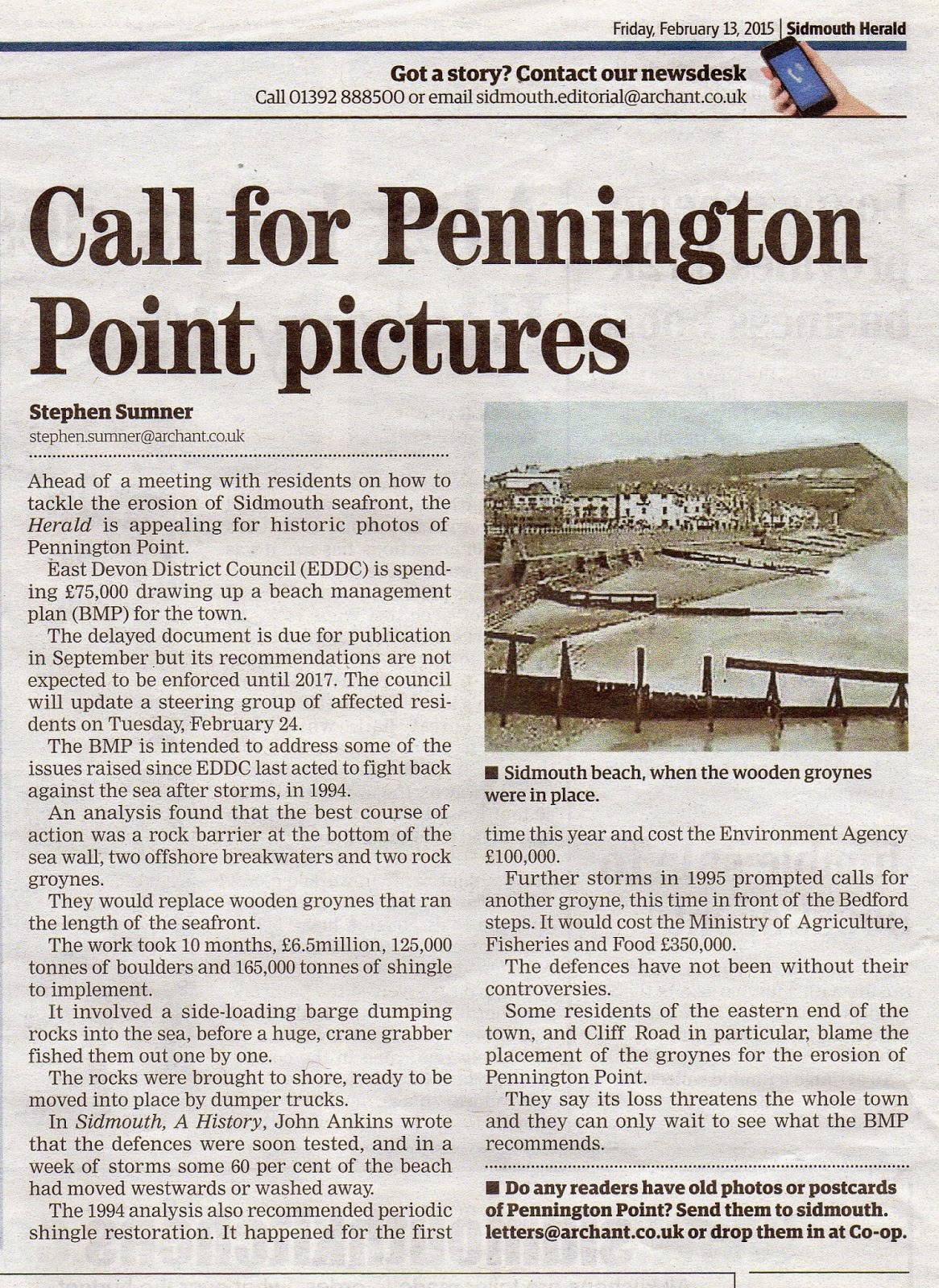