The Beach Management Plan steering group - which is meeting up later this week - have asked the public to submit any information, especially photographic, to help them in their work:
Futures Forum: Sidmouth Beach Management Plan: invitation to comment on draft reports: by 18th February

A postcard of the old wooden groynes shared on the Sidmouth Photos Facebook group
Ahead of a meeting with residents on how to tackle the erosion of Sidmouth seafront, the Herald is appealing for historic photos of Pennington Point.

A crane grabber picking up boulders to form the rock groyne
East Devon District Council (EDDC) is spending £75,000 drawing up a beach management plan (BMP) for the town.
The delayed document is due for publication in September but its recommendations are not expected to be enforced until 2017. The council will update a steering group of affected residents on Tuesday, February 24.
The BMP is intended to address some of the issues raised since EDDC last acted to fight back against the sea after storms, in 1994.
An analysis found that the best course of action was a rock barrier at the bottom of the sea wall, two offshore breakwaters and two rock groynes.
They would replace wooden groynes that ran the length of the seafront.
The work took 10 months, £6.5million, 125,000 tonnes of boulders and 165,000 tonnes of shingle to implement. It involved a side-loading barge dumping rocks into the sea, before a huge, crane grabber fished them out one by one. The rocks were brought to shore, ready to be moved into place by dumper trucks.
In Sidmouth, A History, John Ankins wrote that the defences were soon tested, and in a week of storms some 60 per cent of the beach had moved westwards or washed away.
The 1994 analysis also recommended periodic shingle restoration. It happened for the first time this year and cost the Environment Agency £100,000.
Further storms in 1995 prompted calls for another groyne, this time in front of the Bedford steps. It would cost the Ministry of Agriculture, Fisheries and Food £350,000.
The defences have not been without their controversies.
Some residents of the eastern end of the town, and Cliff Road in particular, blame the placement of the groynes for the erosion of Pennington Point. They say its loss threatens the whole town and they can only wait to see what the BMP recommends.
Do any readers have old photos or postcards of Pennington Point? Send them to sidmouth.letters@archant.co.uk or drop them in at Co-op.
Call for Pennington Point pictures - News - Sidmouth Herald

This week's Herald carried another photograph: 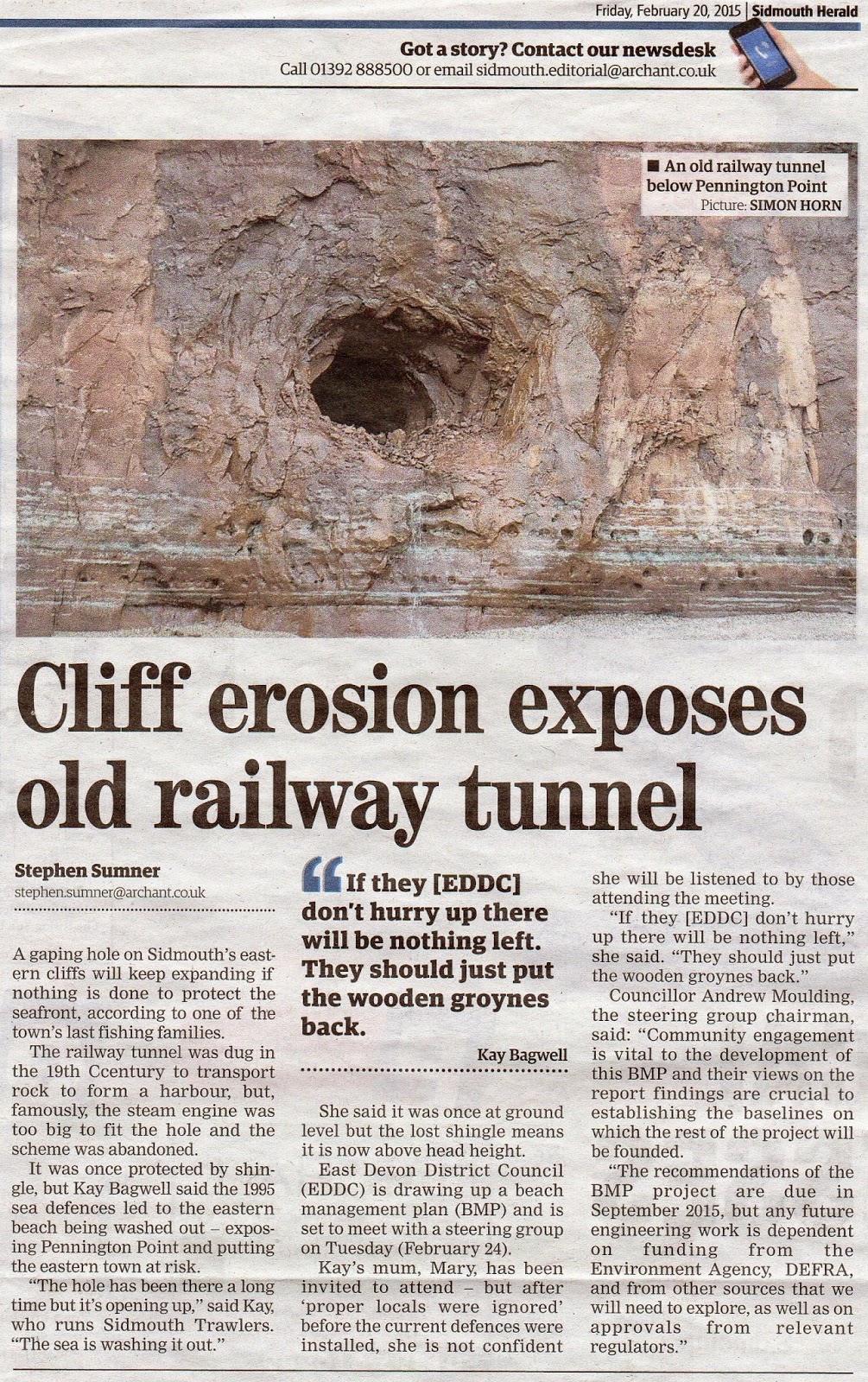 See also:
Futures Forum: "Although the cliff face at Pennington Point has experienced recent erosion, there is no immediate requirement for emergency works to be undertaken and that the town of Sidmouth is not at increased risk of flooding now or in the near future." [2009 Report]
Beach restoration work finishes early - News - Sidmouth Herald
.
.
.
Posted by Jeremy Woodward at 11:46