A solution to our housing problems: the 'impossible' zero-carbon house

There has been considerable debate within the construction industry about the real possibilities of coming up with the 'zero carbon' house:
Zero carbon homes | Magazine News | Building
Industry split over zero carbon homes deadline - Construction Manager - News

It now seems that the 'impossible' is now 'possible'...

The design and construction of a zero-carbon house has caused quite some excitement:
Designers Create The 'impossible' Zero-Carbon House | ebuild.co.uk
This “impossible” house generates more energy than it uses | Alphr
Cheap Zero-Carbon House Built by British Designers - The Green Optimistic

This is the BBC's coverage: 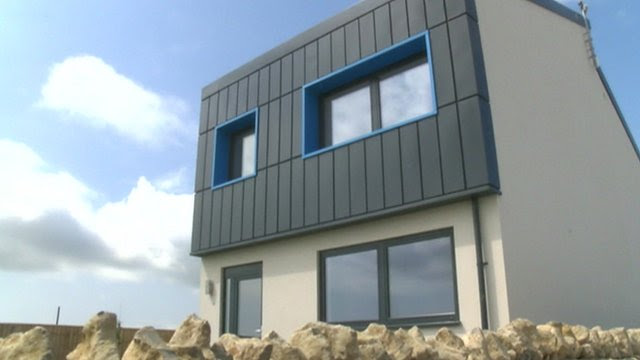 A look round the 'impossible' zero-carbon house

Professor Phil Jones from Cardiff University gives a tour of a zero carbon property near Bridgend.
Chancellor George Osborne scrapped a requirement for new homes to be zero carbon by 2016 because he said it would prove too expensive.
The house took just 16 weeks to construct and cost £1,000 per sq m - that is within the range for social housing of £800 to £1,000 per sq m, the designers said.
The property has insulated render on the outside and air heating systems that rely on the sun.
A look round the 'impossible' zero-carbon house - BBC News


Designers at Cardiff University say they have constructed the sort of house George Osborne once described as impossible.
The chancellor scrapped a requirement for new homes to be zero carbon by 2016 because he said it would prove too expensive.
But Cardiff University say they have built a house that exports more power to the grid than it uses.
And crucially they say the cost fell within the normal budget for social housing.
A government spokesman said house builders needed to be given more time to develop low energy homes.

The house took just 16 weeks to construct and cost £1,000 per sq m - that's within the range for social housing of £800 to £1,000 per sq m, the designers said.
In future, they say its owners will make money from selling excess energy.
The property, near Bridgend, has insulated render on the outside and air heating systems that rely on the sun.
The designers say it will need to import energy in the winter, but the imports will be trumped by energy exports during summer months.
.
A look round the 'impossible' zero carbon house BBC News - YouTube


Another zero-carbon home is close to completion at the Building Research Establishment near Watford. It too is aimed at low-cost social housing.
John O'Brien, from BRE, told BBC News: "The chancellor’s reason for dropping the Code for Sustainable Homes and then the zero carbon homes commitment was because these could not be achieved while still coming in at £1,000/m2. These homes show that is flawed."
He said it didn't need to cost more to build zero carbon homes - and it was even possible to deliver homes at this cost that would provide an income for owners.
The Code for Sustainable Homes allowed councils to demand that builders meet high environmental standards on energy, water, materials, waste and pollution.
The government scrapped the measure in March.

The Bridgend house has glazed solar photo-voltaic (PV) panels fitted into the south-facing roof, allowing the space below to be naturally lit.
This reduced the cost of bolting on solar panels to a standard roof.
The house uses solar generation and battery storage to run both the combined heating, ventilation and hot water system, and the electrical power system, which includes appliances, LED lighting and a heat pump.
The solar air system preheats the ventilation air, which is also warmed by a warm water store.
Professor Phil Jones, who led the project, said: "Using the latest technology, innovation and design, it is indeed possible to build a zero carbon house at low costs, creating long-term benefits for both the economy and the environment.
"The cost of our carbon-positive house was similar to that of the social housing benchmark, making it an affordable option for house builders. We hope that this can be replicated in other areas..."
Both of the pioneering homes will be closely scrutinised because homes inhabited by real people do not always perform as well as researchers calculate they should.
A bigger challenge by far is retrofitting the UK's existing housing stock, which is some of the least efficient in Europe.
The government has also cut funds for home energy efficiency as part of its austerity drive.
A Department for Communities and Local Government spokesman said: "The government is not proceeding with the zero carbon buildings policy and will instead give developers the time they need to build energy efficient homes required by recent changes brought in during the last parliament to building regulations to improve efficiency."
The Home Builders Federation has been lobbying for a reduction in regulations. It says this will reduce costs and help increase supply at a time of housing shortage.

Steve Turner, from the HBF, told BBC News: "Maintaining the current energy efficiency requirements for new homes is a sensible move.
"The UK is already building some of the most energy efficient homes in the world under the current exacting standards. Homes built today are a third to 50% more energy efficient than existing homes, saving buyers hundreds of pounds a year on energy bills."
But former Energy Secretary Ed Davey said the government's energy policies were "doctrinaire".
"The Zero Energy house shows that the abolition of the new home standard was reckless vandalism which will end up costing consumers and the country much more money in energy bills," he said.
Other critics say mass market house-builders should be forced to learn new techniques and to use new materials.
Jenny Holland, from the Association for Conservation of Energy, said: "We need an end to the short-sighted Treasury approach that only cares about building costs. Householders want to know how much the house costs to live in, not to build.
"People pay a little extra for an efficient fridge or freezer. If spending a little more provides a better house that has close to zero energy bills, the occupants are happy and we all reap the environmental rewards."Linkedin

More on this story