'Radical municipalism' is happening in Barcelona:
Futures Forum: Radical Municipalism: "We will never properly address issues like climate change and other environmental problems that are undermining the stability of the planet unless we address the underlying issues of dominance and hierarchy. In order to heal our rapacious relationship to the natural world, we have to fundamentally alter those social relations on every level."

Another is the sheer amount of traffic:
Futures Forum: Cities Without Cars @ Costing the Earth on Radio 4
Futures Forum: How to deal with air pollution: ban all diesel and petrol vehicles by 2040 >>> but will it work?

The question is how to deal with it - and Barcelona is looking at 'inclusive' strategies:
Futures Forum: "Inclusive growth" >>> "The message is clear: Be serious and offer genuine involvement. People can smell tokenism from a mile away."

But this has a long, long history:
Futures Forum: Experimentation in Catalonia

And these ideas are gaining interest beyond - and into the mainstream: 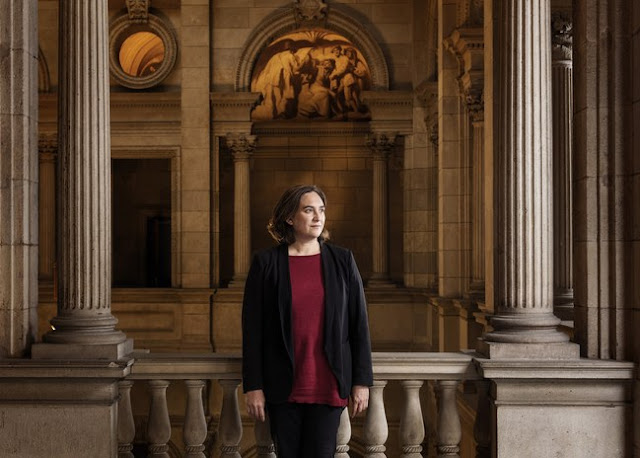 
Barcelona City Hall looks like it’s been occupied by protesters. A banner over the entrance to the fourteenth-century building reads, in Catalan, “Free Political Prisoners”—a reference to Catalan pro-independence activists, some of whom have been prosecuted while others were forced into exile by the national government in Madrid. The banner was placed here by the city government, which is indeed run by protesters: the ruling coalition of Mayor Ada Colau has its roots in the Indignados, the anti-austerity movement that’s often referred to as Spain’s precursor to Occupy Wall Street. (Colau is not herself a supporter of Catalan independence; more on that later.)

Barcelona is the heart of a new global political phenomenon known as municipalism. Last weekend, municipalist activists from North America, Europe, and Africa met in New York City for the third Fearless Cities summit. (The first took place in Barcelona, last year, and this summer there were summits in Warsaw and New York on subsequent weekends in July.) Municipalism is hard to define, intentionally so. Municipalist activists aim to break the bounds of traditional party politics and challenge institutional politics as they currently exist, making the language of party and institutional politics a priori insufficient for describing them.

I was in Barcelona in June and interviewed several of the key members of Barcelona en Comú, the “platform,” as its participants call it, that brought Colau and her coalition to City Hall, in June, 2015. Barcelona en Comú, in turn, is part of a wave of what has been dubbed “municipalist confluences”—new formations that have emerged from activist movements in Madrid, Cádiz, and elsewhere in Spain.
For the activists, entering institutional politics was something like a measure of last resort. “We have tried everything,” Gala Pin told me. Pin began her work as an activist as a member of an anarchist collective that squatted in a disused building in Barcelona and then, after the 2008 housing crash, she worked as an anti-eviction activist. “We have tried civil disobedience. We have tried negotiating with banks. Nothing works. We have to join institutions in order to change the way we make policy.”

Colau, like Pin, was best known for her activism on behalf of people displaced by Barcelona’s real-estate and tourism boom and the crisis of 2008. Another prominent voice in Barcelona en Comú, Marta Cruells, a feminist political scientist, was a professor at the Autonomous University of Barcelona before she went to work at City Hall. According to Vicente Rubio-Pueyo, a Fordham University professor who has written a think-tank report on Spanish municipalism, this is typical of municipalist confluences: they consist “mainly of a young, urban and precarious ‘cognitariat’ ”: academics, artists, and journalists, among others. This makes the municipalist trend look like the direct opposite of the right-wing populist movements in Europe and the United States. Stateside, the Spanish municipalists are in conversation with organizations such as the James and Grace Lee Boggs Center, in Detroit, a rare group whose community-organizing efforts have explicit philosophical roots.

The municipalist agenda is intentionally broad; it’s based, as Pin puts it, on common goals rather than differences. As overgeneral and even naïve as that may sound, it has practical implications: municipalism is not trying to distinguish itself from other political parties, in part because it’s not itself a party. Municipalist programs tend to be focussed on the specific needs of a city’s residents and specific programs that address them. In Barcelona, much of the program is focussed on regulating tourist industries in order to improve the lot of local residents, but also to restore some of the city’s particular character that has attracted tourism in the first place.

As the name makes clear, Barcelona en Comú is focussed on the commons. Colau speaks of the importance of public space often and articulately. “Public space is the place, par excellence, for democracy: this space that belongs to all of us,” she told me. “Therefore, this is also the space of the most vulnerable people, which is what democratic systems should prioritize: the people who have fewer opportunities. If you have little private space, you have more public space and public services—libraries, beaches, parks. It is the space to meet with others, but also it’s a space where you can be who you want to be—this is the space for freedom. And, therefore, it is a space where you can build up the city with others. So, from that point of view, the more public space there is, and the better its quality, the better the quality of the democracy.” Colau’s government has pushed experiments in community management of space and resources, such as handing over public buildings to local communities. Barcelona is launching a publicly held energy company that will supply energy to municipal buildings.

A central aspect of municipalist politics, and also, perhaps, the hardest to define, is a focus on what is called the feminization of politics. “Knowing that emotions and affects are very important in politics” is part of what feminization means, Pin said. “Men don’t say that. Empathy is a political value.” Pin’s work in anti-eviction activism is an example of politics that placed emotions at its center. The Barcelona Housing Platform holds open assemblies to which people bring their cases. “The last platform [assembly] we had, this Colombian woman said, ‘When I came here, I wanted to commit suicide, and since then, I have realized that it’s possible to survive and keep my place and negotiate with the bank,’ ” Pin said. “And other people recognize themselves in it. It’s the biggest expression of dignity I have ever seen. I cry every time—these are tears of dignity.” Pin was crying.

“To feminize politics, to me, implies to have more coöperative ways of working that actually allow you to combine professional and private life,” Colau said. “And that should prioritize people and common objectives above any other vested interest and any other type of power.” Cruells, the academic, explained what that means: the city has created a policy department to address the use of time and the economy of care. The department is looking at extending store hours in the city to work better with school and office hours—to enable all people, but especially those whose primary labor is the care of others, to shop outside of their working hours.

A trickier issue at the intersection of feminist and urban politics is sex work. As a political organization, Barcelona en Comú favors its legalization. Many of the new politicians’ constituents, however, oppose prostitution, especially in their neighborhoods. The solution, for now, at least, is a non-solution that reflects another belief central to the feminization of politics: sometimes it is right to say that you don’t know what to do, because only this answer reflects the complexity of the situation at hand. “We are the first government that’s said, ‘We support the rights of sex workers,’ ” Pin said. “We will find a way for sex workers and residents to be at peace. We won’t promise to ‘clean it up.’ ” Cruells added that, as a result of ongoing conversations with sex workers and neighborhood residents, “We are in a situation where no one is happy but it is true that things are better.”

Many of the issues that Barcelona en Comú is tackling come up against limitations set by Catalan and Spanish law. The city lacks the authority to regulate housing, although Colau’s government has created new affordable housing, including hundreds of vacant bank-owned units, and has successfully limited the reach of Airbnb and its competitor HomeAway, slapping fines on both companies. The city can’t impose labor regulations that exceed the demands of national law, but the government can exert pressure by doing business only with hotels that agree to pay a living wage.

When the new city government moved to rein in the tourist industry, three years ago, industry experts, lobbyists, and more economically conservative politicians criticized them as naïve and, worse, unqualified: they didn’t know how things were done and where the city’s money came from. They found themselves at war with lobbyists who, Pin said, were not only angry but also confused because they didn’t know the new people and didn’t have their phone numbers. “We were treated like, ‘You are the democratic mistake.’ ” After a while, she said, they learned to speak to the hoteliers and lobbyists.

Then, in the fall of 2017, came the referendum in favor of Catalan independence. On the one hand, Colau opposed independence. “I’ve never been interested in independentist or nationalistic positions that say, ‘We want to live in isolation and we want to be separate from the others,’ ” she said. “That’s exactly the opposite of feminizing politics, in my opinion. We live in a world of interdependencies, where most of the things happen in cities, not in states. Therefore, to believe that all political solutions are based on the proposal for a new state—I think that’s a bad solution.” In 2016 she joined the former Greek finance minister Yanis Varoufakis in launching DiEM25, a movement that aims to rejuvenate the European project—in effect the opposite of the pro-independence movement. At the same time, consistent with her politics of radical democracy, Colau supported the referendum itself, and directed city schools to host polling. A majority voted to secede from Spain. The government in Madrid, however, refused to recognize the results of the referendum, putting Colau in a bind: she had run afoul of Madrid by facilitating the referendum, and she had angered the Catalan nationalists by opposing their mission. She has now found herself fighting not only for the release of pro-independence political prisoners but also for a legally binding referendum on the independence issue—and hoping that her compatriots vote the initiative down.

Barcelona’s Experiment in Radical Democracy | The New Yorker
.
.
.
Posted by Jeremy Woodward at 12:24