Restricting parking in Sidmouth > residents against commuters and tourists

The only problem is that if parking is further restricted to residents only, that those driving into Sidmouth to work will find it even more difficult to find a parking space - and that's a real problem because Sidmouth is the only town in East Devon (apart from Axminster) to have more people commuting in than out - as pointed out at the time of the consultation:
Futures Forum: Parking consultation for Sidmouth: deadline Friday 22nd June

And which was pointed out in relation to putting together the Local Plan:
Futures Forum: Housing numbers in East Devon ...... and the Local Plan ...... further reports on planning meeting of 26th August

It will be interesting to see the figures of this year's visitors to the Folk Week compared to last year's - and whether the not-very-warm welcome of some locals when it comes to parking on 'their streets' has had a detrimental effect - as suggested by this piece in the Herald:

Parking ban on residential roads in Sidmouth slammed by visitor

A decision to enforce parking restrictions on residential roads during FolkWeek has been slammed.

John Whelan, 79, who has been attending FolkWeek since 1966, said he was disappointed to see all the side roads in around Sidmouth had parking restrictions, for the duration of the festival.

He added: “Over the weekend the car parks in the town centre were completely full. It isn’t the campers it is the day visitors that are just tourists that had the problem. “So many people were upset and were telling me they won’t come again.”

Mr Whelan claimed a number of drivers gave up and went home. He added: “I could understand if they just put overnight restrictions in place to discourage campervans parking there but it is throughout all of FolkWeek.”

Festival director John Braithwaite said: “I am sorry if anyone had issues with parking but we did put a park-and-ride in place which can be used by anybody - and that is never full. We work really hard to try and include people from the local area.”

County Councillor Stuart Hughes, who is responsible for Highways, said: “Those restrictions were put in place because that is what was agreed. When you have an event the size of FolkWeek that comes to Sidmouth and brings so much to the local economy you have to have a traffic management plan and that includes putting restrictions in place.

“I have also had residents moaning about people parking where restrictions are in place and that they can’t park where they normally do during FolkWeek. The day time is when you have the most problems. You can please some people, but you can’t please everyone unfortunately.”

Social networkers also took to Twitter to hit out at East Devon District Council for closing its car park at Knowle.

An authority spokeswoman said: “We love FolkWeek and work hard as a council to make sure that it runs smoothly. The car parks at our offices are the working car parks for staff and visitors to the offices. “Each year they are closed off for the weekend of Sidmouth FolkWeek. This is to make sure that they aren’t used by campervans and other vehicles when our offices re-open for the week which would prevent visitors to our offices and our staff parking in them.”

Tim Walker
Bitter skirmishes are raging between motorists and councils all over the country. But could automation, big data and disruptive technology provide a solution?
Sat 25 Nov 2017 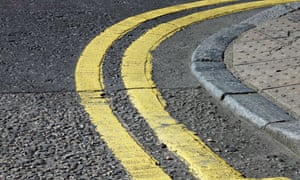 Samantha Moore may seem jolly, perched among the jars of fudge and flying saucers at her sweet shop on Fore Street in Brixham, the picturesque Devon fishing town. But there’s one subject sure to sour her mood: parking. Moore and her family live above the shop and pay Torbay district council £50 a year for an off-peak permit, which allows them to leave their Peugeot hatchback in the nearby town-centre car park between 3pm and 10am.

That’s convenient from Monday to Friday, when Moore’s husband takes the car to work. At weekends, she says, “Parking is a nightmare. On Saturday mornings, we have to put the car anywhere we can find a free space in Brixham.” That means leaving it on residential streets. “And then the residents feel we’re taking their parking spaces. We’ve had dog turds smeared on our windows, rude notes left under the wipers, damage done to the car.”

Parking also impacts on Moore’s business. In January, she closed her luxury soap shop, which catered to tourists, and opened Sweet Treats in hopes of attracting more local custom. Yet, after raising the cost of parking to 50p for 30 minutes last year, the council recently doubled it to £1. “It’s not the holidaymakers we need to worry about, it’s the locals,” Moore says. “The minute parking charges go up, they just won’t come into town – and trade drops off.”

Along the coast in Totnes, the tourists have noticed, too. The Totnes Times recently devoted its front page to a letter from Mark Lee of Bradford on Avon, who professed himself “shocked and disappointed” by the lack of free on-road parking anywhere in the outwardly charming market town. “Totnes well and truly takes the biscuit as the most visitor-unfriendly town or city we have probably ever visited,” Lee wrote. 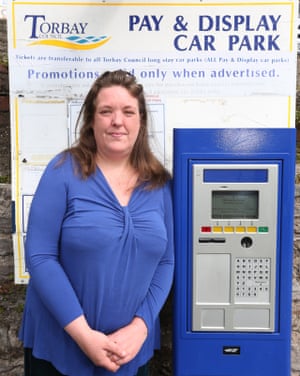 South Devon is the site of several such skirmishes in the endless war over parking space, a topic that inspires angry letters to local newspapers up and down the land. Meter charges are as fraught an issue as bin collections or the price of a pint of milk. Simon Lee, a DJ with the local radio station Torbay Sound, recently launched a Change.org petition to protest against the district’s latest parking rate hikes. It has attracted more than 700 signatures.

There are just three free parking spots left in the whole of Torquay town centre, says Lee, a second world war history buff who drives a Vauxhall Astra. “Torbay council used to offer £2 all-day parking through the winter, which was great for locals. But they put it up to £10 overnight. That was the ‘yikes’ moment that made me start the petition. I expect it will fall on deaf ears, but I wanted to get a rant out there and see who else felt the same.”

Britain is home to more than 30m cars, which on average spend 95% of their time parked. In London, minimum parking requirements for new properties were abolished in 2004; according to the Economist, the average parking provision in new residential blocks soon fell from 1.1 spaces per flat to 0.6, putting street parking space at an even greater premium.

As anyone who has had a prang in the supermarket car park knows, parking spaces have remained roughly the same size for decades, despite our cars expanding: the VW Golf, for instance, has grown 55cm longer and 19cm wider since the 1970s. Meanwhile, the way we pay for those spaces has long been “stuck in the 1930s”, says Donald Shoup, a professor of urban planning at UCLA. “That’s when the parking meter was invented, and for most people it hasn’t changed: you put your money in the meter and hope to come back before your time runs out. What other industry has changed so little in 80 years?”

What has changed, of course, is the price of a space. Research conducted by the RAC Foundation suggests parking fees and fines produced a collective surplus of £756m last year for 353 local councils in England. That’s a 34% increase since 2011, leading some to suspect that, in straitened times, councils are using drivers as a cash cow.

“No one wants a parking free-for-all,” says RAC Foundation spokesman Philip Gomm. “But with English councils annually making north of three-quarters-of-a-billion pounds between them, it is right to ask whether this has become less about managing congestion – the sole legal justification for setting on-street charges – and more about shoring up declining budgets.”

Terry Falcão, the outgoing mayor of Teignmouth, spent three months of his year-long tenure preparing a paper on parking to submit to Devon county council, which oversees the town’s on-street parking. The council took up his recommendations for a residents’ parking scheme, but he says they also added meters to a stretch of the seafront without consulting him. “Motorists are perceived as an easy target to raise revenue,” says Falcão, who vacated the mayoralty in May, and so can no longer park his Renault Clio in the mayor’s reserved spot. 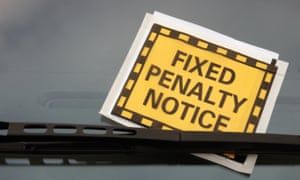 Peering to read the small print on the meter at the Eastcliffe car park in Teignmouth, coach driver Phil Parfett complains that councils raise parking charges in towns, “and then they wonder why everyone goes to the out-of-town Tesco”. Parfett has been driving coaches for 35 years and frequently works on the continent. Seaside towns in France and Spain always offer free coach parking, he claims, adding: “Britain is the worst place to park in the world.”

Devon county council did not respond to a request for comment, while Torbay council said its parking rates were set following a year-long review, which took on board the views of residents. As Cllr Martin Tett, a spokesman for the Local Government Association, points out, “Where they do make any surpluses from on-street parking, [councils] are required to spend it on improving parking and transport facilities.”

Explained very well. Thank you. To avoid extra fee you can also compare airport parking deals as well as meet and greet for extra savings.