Next Tuesday, the former chief scientist will be in Branscombe: 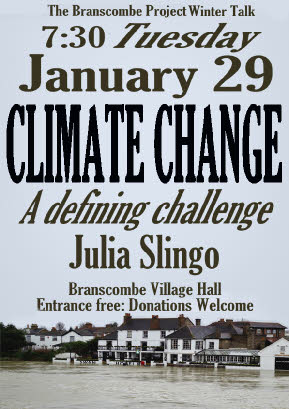 Climate Change – A Defining Challenge for  the 21st century

Julia (Chief scientist - Met Office) will be looking at the evidence for human influences on our climate, and describe how we use computer simulations of weather and climate to tell us about the future.

She will talk about the potential impacts of future climate, and the implications for how we produce and use energy, and manage Earth's limited resources.

With more from the Herald:

Professor Dame Julia Slingo, one of the world’s leading experts, will discuss the human influences on the climate, and the prediction of future weather patterns

The former chief scientist at the Met Office, Professor Dame Julia Slingo, will give a free talk in Branscombe later this month, on the subject of climate change.
Dame Julia, who lives in Sidmouth, retired in November 2016 after seven years in the top post at the Exeter-based office. Earlier that year, she won the World Meteorological Organization’s top award, and was described by its president as “a pioneer in science”, and “a beacon in the world” whose work was “enabling us to better predict extreme weather.”
In her talk she will be discussing the evidence for human influences on our climate, and describe the use of computer simulations of weather and climate to predict the future. She will consider the potential impacts of future climate change, the implications on how we produce and use energy, and how we can manage the earth’s limited resources.
The talk will take place on Tuesday, January 29 at 7.30 at Branscombe Village Hall; everyone is welcome.