Sidmouth has a fatberg:
Futures Forum: The Sidmouth fatberg and plastic pollution: "the wet wipe monster"

And so do other 'upmarket' towns, as reported by the Sunday Times:

Fatbergs are becoming the plague of Britain’s poshest towns. The 200ft beast found blocking sewers in the Devon seaside resort of Sidmouth last week is the latest to be discovered in upmarket towns and suburbs, fed by the luxury lifestyles and toilet habits of well-off residents.

Sewers in Cheltenham, Harrogate and Henley-on-Thames have all been choked by fatbergs in the past three years, along with exclusive Chelsea, in London.

The trend for fetid fatbergs to form fastest under upmarket streets is partly linked, say water company bosses, to residents’ fondness for luxurious toilet tissues, such as pre-moistened wet wipes or thicker quilted products, many of which may never break down.

“These fatbergs do seem to crop up more in upmarket towns,” said Andrew Roantree, director of wastewater at South West Water...

With more from the Mail:

By SOPHIE LAW FOR MAILONLINE
13 January 2019

Upmarket towns are being choked up with huge fatbergs due to wealthy residents' fondness for expensive quilted toilet paper and wet wipes.

Last week, a fatberg longer than five double-decker buses was found blocking a sewer in the seaside resort of Sidmouth, Devon. One of the biggest fatbergs ever found, it is estimated take around eight weeks to remove it.

The enormous blockage, fed by luxury lifestyles of rich residents, is the latest to be discovered in posh towns. Sewers in Chelsea, Cheltenham, Harrogate and Henley-on-Thames have been plagued by fatbergs in the past three years.

And water company bosses say fatbergs form under wealthy towns due to residents' penchant for better quality brands of toilet paper which do not break down easily in water, according to The Sunday Times.

Andrew Roantree, director of wastewater at South West Water, which manages Sidmouth sewers, told The Sunday Times: 'These fatbergs do seem to crop up in more upmarket towns. The social demographics of fatbergs are complex - we see them in deprived areas too - so we want to work out how modern lifestyles cause them'.

The company have asked Exeter University to analyse the huge fatberg found in Devon.

Luxury quilted toilet paper along with pre-moistened wipes coated in cooking oil appear to be the main cause of these mass sewer blockages. 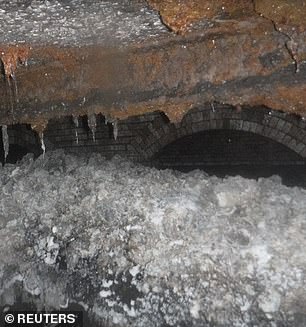 Experts say the 'ultra-strong' paper is a huge problem as they may never fall apart in water - which is what sewers are designed for. Many of the expensive brands can stay intact for 'forever' because other materials cling to it and and balls of fat solidify and grow.

Andrex Washlets are made by US company Kimberley-Clark rejected the claims its wipes caused blockages.

But Mr Roantree claimed the wipes stay moist without breaking up 'for weeks' and urges people to put these products, along with quilted toilet paper 'in a bin, not down our sewers'.