What exactly do we want to do with our land in East Devon?

This has just been pointed out on the East Devon Watch website:

AGRICULTURE MINISTER SAYS WE HAVE “LOST TOUCH WITH THE LAND”

In an interview with The Sunday Telegraph today, Miss Truss declares her personal mission to get consumers to buy less cheese from abroad, while reconnecting the British people with the ancient agricultural landscapes from which their food is grown. Liz Truss interview: 'We have lost touch with the land' - Telegraph

And where we may have no choice but to buy our cheese abroad when grade 1 agricultural land with planning permission for houses sells for £1 million an acre.

And where dairy farmers are going out of business because milk prices are so low.

As Secretary of State for Environment, Food and Rural Affairs, Ms Truss will of course be concerned with the value of land for its environmental and farming qualities:

In an interview with The Telegraph, Miss Truss declares her personal mission to get consumers to buy less cheese from abroad, while reconnecting the British people with the ancient agricultural landscapes from which their food is grown.

Liz Truss interview: 'We have lost touch with the land' - Telegraph

However, there are competitors.

There are fears that any 'surplus employment land' could simply be re-classified anyway:
Too much employment land – so it could be changed into more housing developments | Sidmouth Independent News

Still, you can play the game:
Planning Permission: How to Play the Game | Homebuilding & Renovating

Meanwhile, the protests against more housing continue to grow....

The woes of national supermarkets seem to have upset the District Council's relocation plans:
Futures Forum: Supermarket saturation point: Is there really room for more in Sidmouth and in Honiton?

But these problems for supermarkets have meant that they have had to withdraw from other key, symbolic projects in the District:
Futures Forum: The Exeter Gateway intermodal logistics site ... Sainsbury's "has finally killed the plan to build one of the largest logistics plots available in the South West"

There are concerns that the AONB will be littered with solar and wind farms:
Futures Forum: "It has not been demonstrated that development in the highly protected AONB landscape is essential."

A lot of the arguments against 'development' is that it is on 'prime agricultural land':
13/1202/MFUL | Proposed solar farm, comprising the erection of solar arrays, equipment housing, fencing and ancillary equipment. | Land To West & North West Pithayes Farm Whimple

However, it does depend where the development goes - 'premium' farmland or not
- and to what extend farmers need to 'diversify': 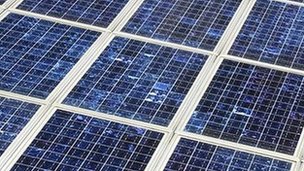 25 January 2013 Last updated at 20:43
A countryside group has raised concerns about Devon farmland being taken out of food production for solar farms.
The Campaign to Protect Rural England (CPRE) said the 1,500 acres which could be affected should be used to produce food for a growing population.
Friends of the Earth said there were sufficient alternatives - such as roofs - not to warrant concern.
The National Farmer's Union (NFU) said using "low-grade" land could help supplement farmers' incomes. Dr Jonathan Scurlock, chief policy advisor on renewable energy for the NFU, said one in three farmers across the country were diversifying into some sort of renewable energy.
'Modest income'

We need food and we have a growing population”

Penny MillsCPRE
"Solar is very efficient in terms of the amount of energy that can be produced. Most solar farms are on low-grade land and can bring a modest income to the farmer," he added.
Penny Mills from the CPRE said: "Farmland should be producing food, that's traditionally what it's done and the concern is this is so large... where is this going to stop? We should be supporting local producers. We need food and we have a growing population."
The 2011 Census revealed England and Wales have a population of 56.1 million people, an increase of 3.7 million since 2001.
RegenSW - an independent centre of expertise in renewable energy - said the CPRE had a "reasonable point to express" but it did not believe there was a serious cause for concern.
'No conflict'

"Prime agricultural land should not be used, in our opinion, and we have issued best practice guidance to councils," chief executive Merlin Hyman said.
Continue reading the main story 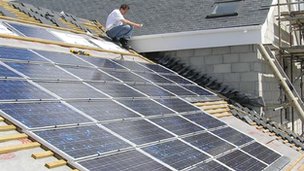 "But there shouldn't be a conflict between fuel and farming and I'd be surprised if planning permission would be granted on prime land. There is perhaps a debate to be had, but by and large our impression is that planning guidance is largely followed."
Friends of the Earth said it was fully committed to alternative energy and solar power had a strong role to play.
"We would be concerned if solar farms were pushing out prime agricultural land but there's no real need for it to happen," energy campaigner Dave Timms said. "There are enough roofs on houses, factories, local authority buildings and enough brown-field sites and waste land."
Rob Denman, director of TGC Renewables, which is building several solar farms in Devon, said farming of livestock, such as sheep, could remain alongside a solar farm.
He said: "To get planning permission we only submit applications for low yield agricultural land otherwise the planner generally turns it down." Mr Denman said depending on a variety of factors, farmers could earn an average of £800 per acre per annum.