The promises of technological innovation >>> >>> >>> "The rise of the techno-libertarians: the five most socially-destructive aspects of Silicon Valley"

Much of this is driven by 'techno-libertarians':

Welcome to the TechnoLibertarian Wiki

Technolibertarianism is also known as extropianism, and represents the individualist wing of the transhumanist movement. The left wing, or collectivist wing, of Transhumanism is known as Technoprogressivism or more colloquially, as Borganist. Transhumanism in general is opposed by technophobia, also known as Luddism of which there are also right wing individualists and left wing collectivists. These distinctions can be mapped out for your positions by taking the Worlds Shortest Transhumanist Quiz, and plotted out on the Lorrey Chart as seen here: 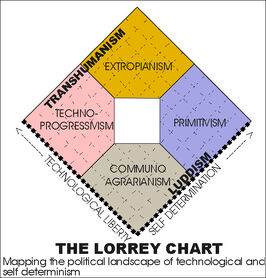 It depends how you see it, of course...
It’s fine if you’re a Technolibertarian, just don’t pretend it’s progressive | pan kisses kafka
Techno-Libertarianism: Building The Case For Separation Of Technology And State - Forbes

Silicon Valley is the home of the technolibertarian - and this week, Bill Gates came to the BBC, which portrayed him as the heroic 'self-made man':

It's a little more interesting than that, however:

A foundational myth of Microsoft is that Bill Gates was a prodigy who started programming at the age of 13. But in 1968 it took much more than smarts to become a programming whiz kid. This was before the age of personal computing, and it was extremely rare for colleges to have access to a computer, much less a middle or high school. But Bill was lucky enough to have wealthy parents, who enrolled him in Seattle’s exclusive Lakeside School. When a local company offered to donate computer time to the school, Bill’s mother Mary helped to organize a rummage sale to purchase a teletype terminal for the school to access it on. Bill and his friend Paul Allen were fascinated by the machine and soon came to dominate the school’s computer lab, developing the skills that would serve them well later in life.

Here is a very critical piece on the heroes of Silicon Valley, from last year:


Rise of the techno-Libertarians: The 5 most socially destructive aspects of Silicon Valley

The tech industry is morally and ethically bankrupt, and it's starting to take its toll on ordinary Americans Rise of the techno-Libertarians: The 5 most socially destructive aspects of Silicon Valley - Salon.com
.
.
.
Posted by Jeremy Woodward at 01:00