There's been an awful lot of hot air around of late:
Some like it hot — but UK heatwave proves a mixed blessing | Financial Times

Including in the Southern Hemisphere:
South Africa: the legacy of the Cape Town drought | Financial Times

And earlier in the week, we heard from a 'sceptic':

How should a steadfast denier account for the heatwave? 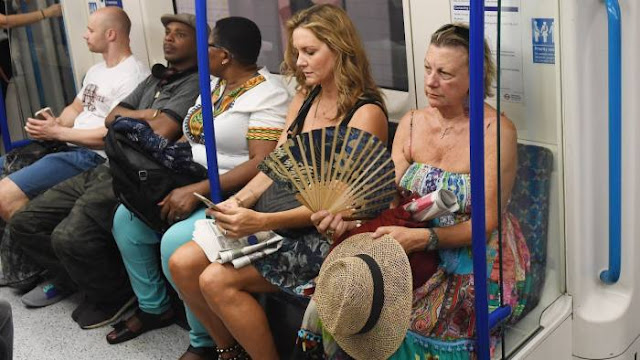 You are hot, and you are not alone. Japan’s national temperature record was broken this week; Sweden is fighting wildfires in the Arctic Circle. The UK is having its driest period since 1969. On Friday it may experience its highest July temperature ever recorded, above 36.7C. Yet only one in three Britons agrees with the scientific consensus that rising temperatures are caused “mainly” by humans. Only one in four is very or extremely worried by climate change.

So how does a climate change sceptic digest the current heatwave?

Hot? This isn’t hot. My mother once mistook my hand for a teapot, and started to make Earl Grey. That was hot. This is balmy! A proper summer.

Post-Brexit Britain will be the best of all worlds. Higher temperatures, weaker currency — a tourism boom! Not that we need too many more foreigners. We can just sit here on the English coast, watching the tide roll in.

Everyone is being pathetic about the heat. Millennials are all in favour of solar power — until they actually get some! Kids, Churchill didn’t offer us blood, tears and air-conditioning. We just need to adapt a few social norms.

Dripping sweat on a fellow commuter has traditionally been seen as regrettable, but I’m confident we can appreciate the benefits of natural moisturiser. When we talk about getting to know our colleagues, why shouldn’t that include their unique smells? And, although historically trousers and skirts have been seen as essential to office life, I have made clear to my assistant that she is very welcome to work in her underwear.

I’m no fool, I know it’s getting hotter. But it’s very uncertain. How do we know human activity is responsible? I don’t see any reason why it would be. Oh, “computer models”. Listen, in my experience, a computer can’t even connect reliably to a printer sitting next to it. Are we to believe that it can predict the temperature half the world away?

They want me to use less energy! To stop eating meat! Can you believe it? I bet you anything this heat will be over by Christmas. We’ll be wearing jackets.

Doom-mongers keep talking about geopolitical instability. Listen, we’ve been having wars for thousands of years. We survived. Well, some of us did. Must I repeat myself? Musk is the man. He’ll fix this. Or at least artificial intelligence will. Have you read what they are doing in China? Fantastic stuff, the details are not vital.

I tell you one thing. I’m happy to cut down on air travel, because helpfully the beach has come a lot closer to the house recently. Very agreeable; probably good for property prices.

The press say a few people have been badly sunburned, and now have bright red stripes across their pale skin. Ha! How do you think the St George’s Cross was designed?

It’s so hot the train tracks might buckle. So? Did this country never exist without railway? Did Henry V give up on Aquitaine because of problems with the 07.54am Eurostar?

And don’t get me started on the bureaucrats. “Stay indoors around midday,” they say. Sirs, I’ve played golf by the seaside every week since I retired. I’m not stopping just when the rough on the tenth hole has died back.

First, contrary to press reports, I did not miss the first fairway — it’s just that part of the course now appears to be below sea level. Second, I did not collapse by the second hole bunker. I was very nearly on the green. Third, many thanks to all the hospital staff who have been treating my heat exhaustion. This rest is giving me time to reflect. When I said I saw no reason why human activity would be to blame for climate change, what I meant to say was I saw no reason why it wouldn’t. Kind of a double negative.

Postscript: 59 per cent of Americans said that climate change was affecting their community in a Pew polling this year. Sixty-seven per cent thought that the federal government was doing too little to tackle global climate change. Imagine the results next year.