UK plastic pollution ending up in Poland, rather than China

Polish 'trash mafia' paid millions to accept Britain's plastic waste - but how much ends up in flames? 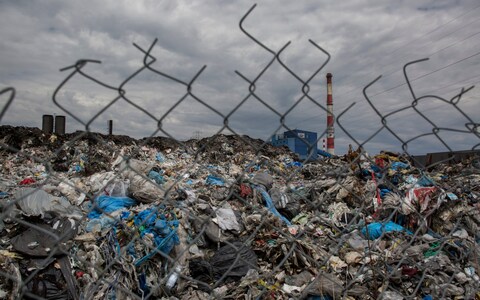 The remains of the huge fire that engulfed the waste dump in the Polish town of Zgierz CREDIT: TOM PILSTON

When the fire took hold of the rubbish dump in an industrial area outside Warsaw, the column of dense, black smoke was visible from more than 30 miles away.

Firefighters from the town of Zgierz, 80 miles southwest of the Polish capital, fought the blaze for hours as tons of soot and toxins were sent high into the atmosphere on a vortex of super-heated air, carpeting the surrounding countryside.

It is now two months since the last flames were extinguished at Zgierz, but as the Telegraph approached the site the astringent stench of scorched plastic was still overwhelming, catching in the throat and nostrils...

Polish 'trash mafia' paid millions to accept Britain's plastic waste - but how much ends up in flames? - Telegraph

Because our plastic waste is no longer being accepted by China:
Futures Forum: Plastic pollution: everything connects

As reported in the Financial Times last week: 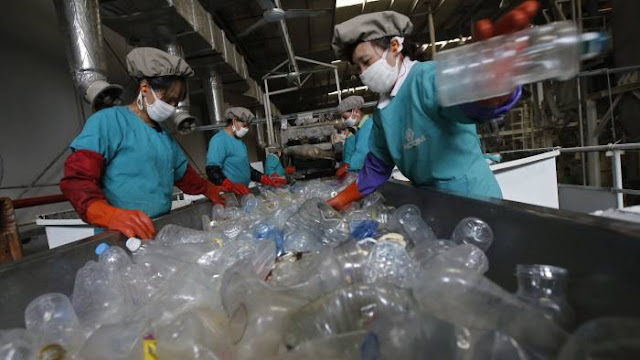 The UK’s exports of plastic waste to south-east Asia have surged this year following China’s crackdown on waste imports, in a trend that industry executives say may be unsustainable.

The latest HM Revenue & Customs statistics show that exports of plastic waste to Malaysia tripled during the first four months of this year compared to last year, making it the single biggest destination for British plastics. Exports to Thailand rose fifty-fold in the four-month period, while those to Taiwan rose more than ten-fold.

The shift underscores how the global market has changed after China — which was previously the world’s biggest importer of plastic waste — decided to close its borders last year. China’s imports of UK plastic waste fell 97 per cent, while Hong Kong’s dropped 71 per cent during the four-month period, according to the figures.

Britain exports a significant amount of its plastic waste because it does not have enough recycling infrastructure to process it domestically, and because its system of recycling credits, known as “packaging recovery notes”, effectively pays exporters to take the rubbish. 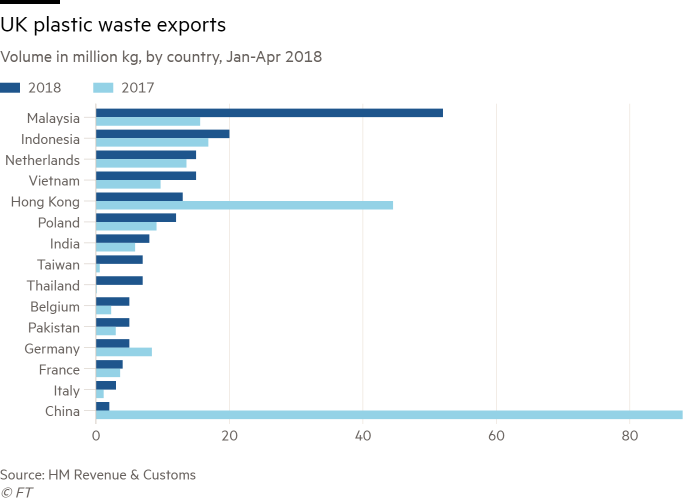 Current recycling policies target the share of plastic waste that gets recycled, but do not take into account where the recycling takes place, or the end market for the recycled product. And despite growing public concern about ocean plastics, the British government has not introduced policies to stimulate investment in the languishing domestic recycling industry.

Jacob Hayler, head of the Environmental Services Association, a London-based industry group, said the government should create demand for recycled plastic in the UK rather than just try to increase the supply of plastic waste that goes into the recycling bin. “We absolutely need more investment in infrastructure here in the UK,” he said. “China was a huge destination which will be very hard to replace.”

Britain’s total exports of plastic waste fell slightly during the first four months of this year, declining from 243m kg last year to 215m kg this year, a drop that reflected the near-total shutdown in Chinese imports.

Listen: Where does all our plastic waste go?

David Palmer-Jones, chief executive of recycling and recovery in the UK for Suez, the French waste and water utility, said the volatility in the global market for plastic scrap could present a “perfect opportunity” for the country to invest more in recycling infrastructure at home.

“There is a great opportunity for that resource to stay in the UK, to have it upcycled, washed, flaked, granulated, and then you are producing the base plastic resource, which is then moulded to create the product,” he said.

The government is expected to publish a Waste and Resources Strategy later this year, and ministers have spoken about some of the policies it may contain, including a bottle deposit return scheme. 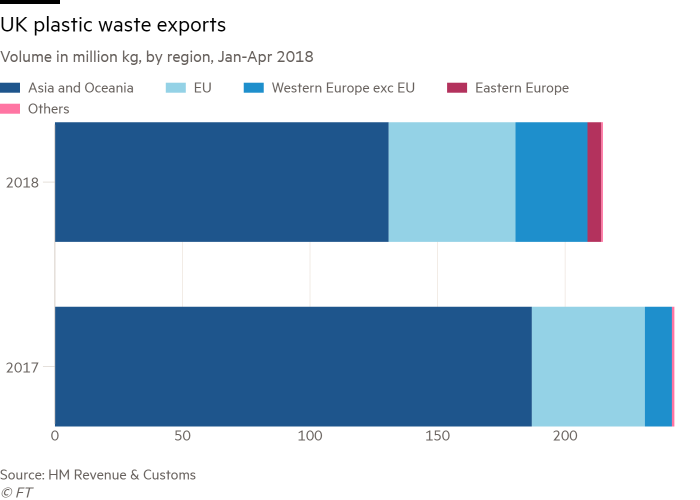 ‘Sweeping waste under someone else’s carpet’

But environmental advocates say the latest export data illustrates the disconnect between the anti-plastic headlines and the fact that consumption of single-use plastic is still increasing.

“Sweeping our waste under someone else’s carpet is not the solution to Britain’s plastic problem,” said Fiona Nicholls, a campaigner at Greenpeace UK. “Instead of just moving our plastic scrap around the globe, we should turn off the tap at the source.”

Ocean plastics activists have also warned that plastic waste is more likely to end up as marine litter in south-east Asian countries with poor waste management infrastructure than if it were handled in the UK.

The surge of rubbish is already prompting a backlash in some places that have been unable to cope. Several ports in Vietnam — which saw a 50 per cent rise in UK plastic waste imports this year — are suspending imports of plastic waste at the end of this month owing to a backlog of containers filled with the material.

Malaysia, Britain’s top destination for plastic waste, is currently reviewing its policies for plastic scrap imports, according to the trade publication Resource Recycling.

And Poland, the second-largest European destination for UK plastic waste, has also said it is cracking down on waste imports following concerns about a “trash mafia” that has been linked to dozens of large fires at landfill sites.

Questions over sustainability of new markets

Mr Hayler said it was positive that Britain had been able to find new markets for its plastic waste, rather than simply sending it to landfill, which has happened in some other countries following the China ban. “We have managed to find new markets to send the material to, so they will still be recycling,” he said. “One of the questions marks is how sustainable this will prove to be over time.”

A Department for Environment, Food and Rural Affairs spokesperson said: “Our ambition is to handle more of our waste in the UK. While there has been a significant increase in recycling over the last 10 years, there is more that needs to be done and we will set out proposals in our Waste and Resources Strategy.”