The campaign against the proposed industrial estate on the edge of Sidford has been hotting up:
Futures Forum: Sidford business park > Hugo Swire MP urges the District Council to 'turn down this unwanted planning application'

Doorstep petitioners, campaigning against Sidford Business Park, have defended themselves after they were accused of being ‘aggressive’ towards residents refusing to sign their petition.

With more photos and a report from the Herald: 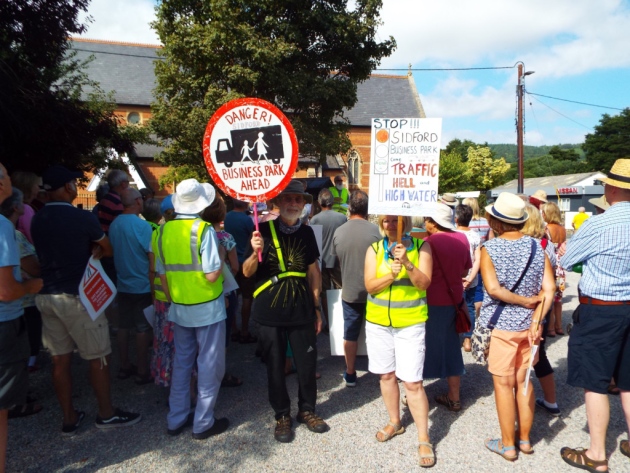 Protestors make their feelings known to say 'no' to development at Sidford. PICTURE: Clarissa Place/Thomas Galli

Protestors made their feelings clear as part of a march saying ‘no’ to the proposed multi-million pound business park development in Sidford.

In excess of 80 people turned up to the ‘Say No to Sidford Business Park’ campaign event on Monday. Residents were armed with homemade placards voicing their opposition to the application, which is looking to create 8,445 sq m of employment floor space on the Two Bridges site.

Councillor Marianne Rixson said that there was more than 1.6million sq ft of commercial property available in Exeter and Honiton catering for B1, B2, and B8 business use. The plans also did not ‘conserve and enhance’ the area under the National Planning Policy Framework (NPPF) guidelines.

She told the crowd: “This development is going to be within our AONB which is precious. The height of these buildings are going to be raised by 1.5m for them to flood proof the site, which with the 7.5m on top is going to be 9m high – that is twice the height of a normal bungalow. There is a duty to conserve and enhance, this is not going to do either. Also it says it should be in exceptional circumstances; we have very low unemployment and there is plenty of property elsewhere, where is the exceptional need?” 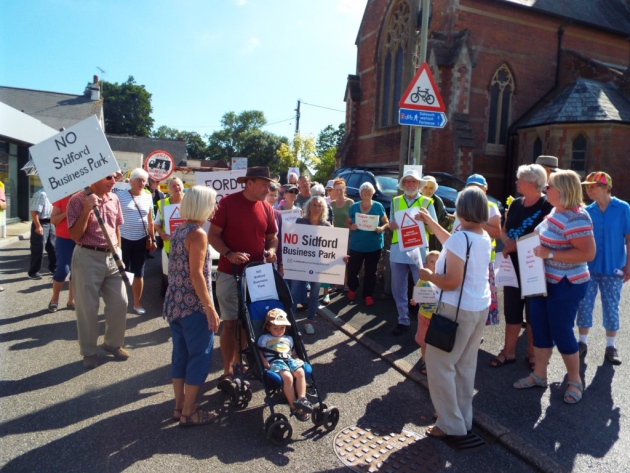 The youngest protester at the event was just two years old, with many children joining adults to raise their concerns about developing in the AONB. Sidbury pupil Billy Bonfield, aged six, said: “I do not want people to build a big industrial estate.” His mum Becky added: “He goes to Sidbury School, there’s always gnarl ups on the road – it’s just not big enough.”

Concerned cyclist Sue Dyson said: “I’m in fear for my life going up School Lane. If there is more traffic, I think I wouldn’t be able to do it, it’s bad enough as it is in.”

Graham Cooper added: “The best idea is to redistribute the employment space across the area and develop brown field sites first. You mustn’t go and develop AONB land unless there’s proven to be a need.”

Campaigners are currently taking to the streets of Sidford and Sidbury with a petition which they will look to present to East Devon District Council.

The campaign has raised £750 so far to spend on signs and posters and urged people to keep donating.