From a piece in the Independent recently, which follows on from some of the issues raised in Futures Forum: Greenfield vs Brownfield:

State must step in to avoid social catastrophe of housing shortage

ANTHONY HILTON
I thought I had slipped into a parallel universe on Friday when I heard that surveyors and estate agents were urging the Bank of England to slow down the rise in house prices. But it also put in mind a conversation with a fund manager on Tuesday. We spoke of how excited he was to invest in housebuilders because the industry had become “much more shareholder friendly”. What he meant was that the people who run building companies these days are far more interested in paying high dividends to shareholders than in ploughing profits back to expand output. And as long as supply lags so far behind demand, prices will rise.


According to the fund manager, up until a decade ago all manner of small builders used to rush out to buy land and start building when they saw signs of life in the market and housing supply would increase rapidly. But the handful of large firms which now dominate the industry take a different view. Pleasing shareholders, and securing their own bonuses, makes them much more interested in keeping the volume of new homes low to get as much as possible for those they do build. That is one reason why you have to go back to the 1920s to find a time when we built fewer houses.

This is potentially a huge problem. Using data from the 2011 census the Cambridge Centre for Housing and Planning Research forecast this week that the number of households in England and Wales will rise by a fifth to 27 million in the next 20 years. They say that housing this expansion will require the building of between 240,000 and 245,000 homes a year, which is well over double the present level.

Even in the biggest boom of modern times we struggled to build 200,000 homes, so the private sector alone is not going to meet demand. Even if it could, a significant proportion of these households could not afford to buy at their prices. History tells us we have only ever achieved high volumes of housebuilding when a significant number of homes have been built by public bodies, usually the local authorities.

Good housing creates healthy communities and reduces social problems. Inadequate housing does the opposite. The numbers suggest that the only way to avoid a looming social catastrophe is for the state to step in, either directly or by giving significantly more financial help to housing associations. But given that ministers look the other way when interest rates are rock bottom, it is hard to see them rushing to help when rates are higher and it will cost them so much more.

The Home Builders Federation supports this:
House crisis to worsen as fewer homes get go-ahead - Business News - Business - The Independent

However, is the government's housing stimulus going to help? It was first launched in April, with more details coming out in July:
Revealed: Fresh details on Government's Help-to-Buy housing scheme - UK Politics - UK - The Independent

There are fears that the scheme is simply overheating demand:

The government has fast tracked the second part of its mortgage scheme, offering a lifeline to millions … and attracting criticism from experts 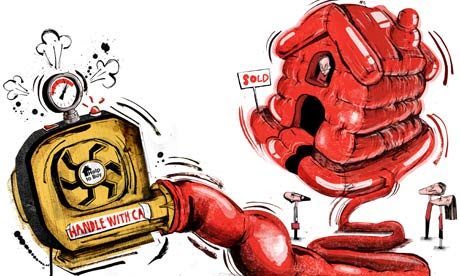 Illustration: Ben Jennings
A range of government-backed 95% mortgages are set to go on sale next week after ministers fired the starting gun on a new propertyscramble.
Two partially state-owned banks, Royal Bank of Scotland and the Lloyds Banking Group, will offer the loans initially, and millions of people will potentially be eligible to sign up.
Under the controversial Help to Buy scheme, homebuyers will only need to put down a 5% deposit – and it is open to existing owners as well as first-time buyers. What is more, there are no limits on how much you can earn and it applies to both old and new-build properties costing up to a generous £600,000.


Help to Buy: let the property scramble begin | Money | The Guardian
Help to buy, or hinder? - Telegraph
.
.
.
Posted by Jeremy Woodward at 13:35