Peak Oil... and EROEI... or Energy Return on Energy Investment

It is clear that oil extraction is going to become more expensive:
Futures Forum: Peak Oil... and the oil industry
But what is 'more expensive'?
What will happen to 'Energy Return on Energy Investment'?
Will investors be willing to take on those risks?
Will governments be prepared to subsidise such unattractive EROEIs?


Peak Oil analysis site The Oil Drum recently announced it’s shutting down operations. Due to a dearth of new content, the management decided to stop publishing new material after July 31, leaving the existing content as a permanent archive. Naturally this evoked chortles of mirth from the Wall Street Journal. Those dumb old gloom-n-doomers at The Oil Drum, they speculated, were suffering crippling depression from the North American fossil fuels boom in the Bakken shale and the Alberta tar sands.

According to oil analyst Arthur Berman at Labyrinth Consulting Services, the Bekken shale is a classic example of a bubble economy. Shale oil extraction simply isn’t sustainable or self-financing. It requires enormous investor financing to get the wells producing. Returns per well quickly decline, so there’s no way to recoup that investment from production.

Fossil fuel from deep offshore wells, shale and tar sands has one thing in common: It’s costly and difficult to extract, bottom-of-the-barrel stuff,  worth bothering with only because the low-hanging fruit has already been picked. There’s a technical term called EROEI — Energy Return on Energy Investment — referring to the number of units of energy it costs to extract a unit of usable energy from any given source. These new sources of oil all have very low energy returns on energy investment. It takes a lot of energy to get just a little more net usable energy at the end of the process.

That means it’s only profitable when it’s heavily subsidized by taxpayers, extracted from stolen land at government expense.

Behind the Numbers on Energy Return on Investment 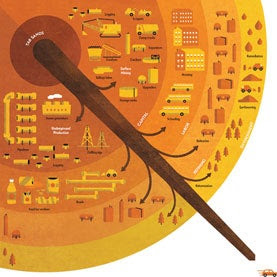 When I proposed an article to Scientific American on energy return-on-investment, also known as EROI, I didn't realize how much legwork would be involved in gathering the numbers needed for an infographic to accompany the story.