Flooding in the West Country... and coastal communities

The weather has been particularly severe along these coast:
Warnings of danger to life as 'perfect storm' prepares to batter Devon's coast | Exeter Express and Echo 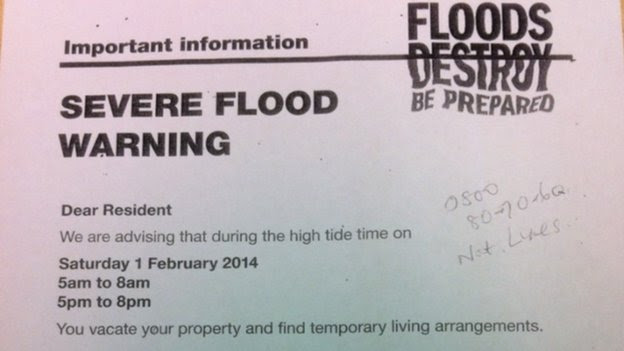 Coastal communities in Devon and Cornwall have been warned to remain on high alert as forecasters warn of further strong winds and high tides.
Stormy conditions have already caused some flooding and damage, but no major incidents have been reported.
Cornwall Council advised the evacuation of more than 100 homes in Bude and Portreath earlier, but only a few residents left their properties.
Two severe flood warnings remain in place for the north Cornwall coast.
Continue reading the main story 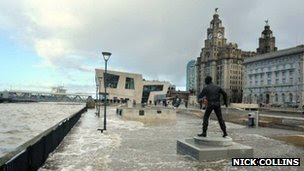 From the BBC:
Elsewhere:
Heavy rain, hail, thunder and gale-force winds are forecast, with gusts of up to 70mph, which could force the high tide to breach sea defences and harbour walls.
A evacuation advisory letter - hand delivered to homes in Bude and Portreath - says people should again consider leaving their properties at the next high tide which is between 17:00 and 21:00 GMT.
The second highest tide of the year is expected on Sunday.
Snow also fell on high ground in both counties and with sub-zero road surface temperatures reported, drivers were warned about the risk of icy conditions.
The Environment agency has a live flood warning map showing where its flood alerts and warnings are in force and the public have been urged to stay away from coastal areas.
According to the Met Office, the region has experienced one of the wettest Januarys on record.

There have been several longer-term studies on the impact of flooding on coastal communities in the South-West:
www.nationaltrust.org.uk/document-1355766981103/
Storms have changed our coastline forever, according to Exeter University expert | Exeter Express and Echo

The Exe Estuary is particularly vulnerable:

THOUSANDS of pounds have been pledged by East Devon District Council in the hope of bringing forward a scheme that should prevent tonnes of sand being washed across the estuary from Exmouth to Dawlish. Concerns about sand being washed back and forth across the estuary have been going on for years. The sand spit jutting out into the mouth of the Exe estuary from Dawlish Warren serves as a natural coastal defence system. But a combination of climate change, tidal movements and storm events over the past few decades has left the shifting sands depleted, prompting concerns of a potential breach in the defences.

Sidmouth has its own issues with threats to its coast - and these have been considered by the draft Local Plan.
Here is a submission commenting on the provisions:

Whilst it is necessary to take reasonable care that proposals for coastal protection are feasible and sustainable, and will not harm the environment, a long list of conditions can be a recipe for inaction.

This is particularly relevant to the situation at Sidmouth, where there has been significant erosion of the cliffs at Pennington Point over many years, but we have only just reached the stage of hopefully starting on preparation of a beach management plan - which may not be completed for many months, and which may or may not provide an answer to the problem, which is effective or acceptable to the parties involved. Please see a relevant report on the Sidmouth Herald website:
http://www.sidmouthherald.co.uk/news/news/cash_pledge_boosts_sidmouth_cliffs_plan_1_2264407

Increased cliff erosion at Pennington Point has been occurring for many years. A report dated October 2009 by Royal Haskoning http://www.eastdevon.gov.uk/eb_310310_item13_app1.pdf
However, the conclusion of the report (in the Summary) was that "...there is no immediate requirement for emergency works to be undertaken and that the town of Sidmouth is not at increased risk of flooding now or in the near future..."

The situation appears to have changed since completion of the above report - based on what people can see when looking at the cliffs. It seems that there has been considerable erosion at Pennington Point and along the cliffs East of Sidmouth since the Royal Haskoning report was completed in October 2009.

The fact that the Royal Haskoning report referred to above found that there has been "...a marked increase in erosion since 1996..." may give weight to the view that the rock islands are contributing to increased erosion at Pennington Point.

EDDC needs to take such a proactive approach in relation to the need to protect Pennington Point and the Eastern Cliffs, and the town of Sidmouth itself, from the effects of coastal erosion. In this respect, I would suggest that the new Local Plan is not sound, since it does not provide an effective strategy to deal with this issue.

Next week, the Sidmouth East Beach Management Steering Group will be meeting:

Coastal and river flooding struck Britain again this week with huge waves hitting southern and western coasts and around 100 flood warnings still in place by Wednesday evening. Disturbing but, sadly, not unfamiliar scenes were accompanied by an impressive catalogue of disruption and bitter tales of avoidable personal tragedy.

But was this weather or climate? Must we expect more of these kinds of events and if so what can we do about it? As with all things climatic the answers are far from simple, but we can start with three basic facts.

First, a warmer atmosphere can hold more water, so at the simplest level, the global hydrological cycle is likely to intensify. This suggests it’s likely to get wetter somewhere, but not necessarily everywhere. Second, the ocean will expand as it warms, leading to rising average sea levels in the coming decades – this is one of the most confident predictions of climate-change science. Third, any melting of the continental ice sheets on Antarctica and Greenland would raise global sea levels further.

Of these three factors, only more intense storms would affect river flooding. Changes in storms are extremely difficult to predict, and will vary between regions, while river flooding is also affected by highly local factors related to soils and land use. If river flooding is changing already then the signal is not yet clear, but the evidence from the past is that relatively modest climate fluctuations since the last glacial period have been accompanied by substantial changes in flooding regimes.

But coastal flooding is another story. Although individual events are highly dependent on winds and tides, and hence subject to the same uncertainties as inland storm behaviour, the inexorable rise of sea level in response to ocean warming shifts the probability of coastal flooding steadily upwards.

The fact that the dynamics of ice sheets are hard to predict just means we can’t be sure how fast sea levels will rise, but the “likely” range from the IPCC is 26-82cm by 2100, so the uncertainty is as big as the signal itself. Indeed even predictions of the warming component of sea level rise depend on poorly understood processes such as the rate of transport of warm water to the deep ocean and typically vary by a factor of two.

Protection pays, but how much?

As rising sea levels will mean more coastal flooding it might seem the answer is clear – invest in sea defences now to avoid damaging floods before they happen. But how much to invest, where and when are much harder questions to answer. We’ve already seen that the rate of sea level rise is highly uncertain, but this is only one factor in the equation of cost versus benefit of sea defences.

Just as important is the value of land to be protected, which depends on how it is used. If land is built on, the degree of coastal development invokes public planning policy as well as private and commercial development decisions. And if land at risk is used for producing marketable agricultural or commercial output, then the value depends on the price of those goods on international markets.

Any decision of where and how much to invest in coastal protection is thoroughly mired in uncertainty. The rate of sea level rise is highly uncertain, and the statistics of individual flooding events even more so. The value at risk depends on the propensity for coastal versus inland development; and the fact that coastal economies are embedded in a globalised world means macroeconomic forces, including international trade, affect the cost-benefit calculation.

So far, the instinct of scientists and politicians has been to take a “science-first” approach, working forwards from the most complete possible scientific knowledge to the best possible decisions. But the science will never be complete and time is short. Much better, some have argued, to start from the policy end – prioritising the science that is necessary to choose between the policy options that are actually available, and using models as tools to explore the most relevant options.

Science first or policy first, we need better ways to making decisions under conditions of uncertainty. The ERMITAGE project has taken important steps in this direction by combining models of climate, economy and agricultural production. Initial results confirm earlier conclusions: money put into coastal protection pays for itself handsomely.

See also:
Futures Forum: If you have an expensive house near the sea, it’s time to sell
Futures Forum: "Living with a Changing Coast" on the Exe Estuary....... event Wednesday 27th November
Futures Forum: "The storms that flayed the Dorset coast this week revealed a story not just of frail humanity humbled by nature’s power, but of foresight, preparedness – and elegant engineering solutions."