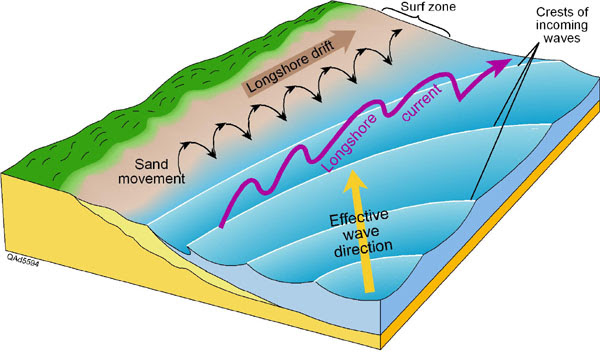 Chesil Beach is a very good example of this phenomenon:
Futures Forum: "The storms that flayed the Dorset coast this week revealed a story not just of frail humanity humbled by nature’s power, but of foresight, preparedness – and elegant engineering solutions."

The formation of Chesil Beach

It has long been recognised that waves hitting a beach at an angle drive the beach materials in the direction that the waves are moving.

The beach is exposed to the full force of the Atlantic and the long shore drift is predominantly to the east. This explains the occurrence of pebbles from Budleigh Salterton and more importantly, demonstrates that at least a proportion of the material that forms the beach came from the west.

An early theory to the pebble gradation was that the strong south westerly gales carried all of the material to the east and that less strong waves from other directions carried the smaller pebbles back to the west. More recently it has been suggested that the larger pebbles move more rapidly due to their larger surface area. The local variations in pebble size both along and across the beach are thought to be significant but no satisfactory theory can yet explain it.
Beaches - Jurassic Coast

Students from the College have been considering this subject along the coast at Dawlish Warren: 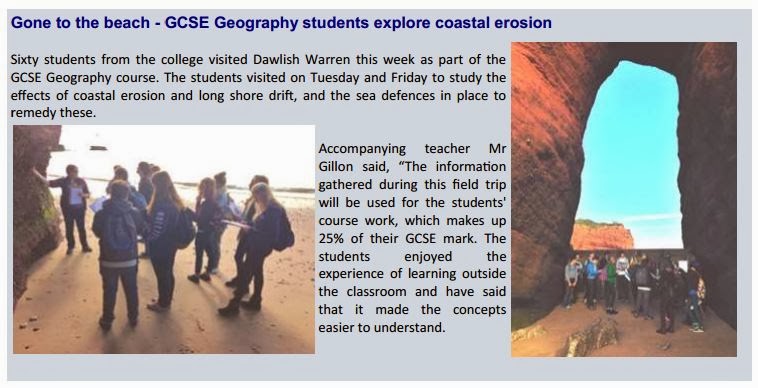 Sidmouth, along with other towns on the South coast, has been exposed to the potentially damaging effects of longshore drift - and measures were taken in the late 1990s to lessen this impact.

And here's a useful overview of both the principles and the work undertaken in Sidmouth:

Offshore breakwaters, act as a direct barrier to waves, reducing the wave energy before a wave reaches the shoreline, therefore consequently reducing erosion potential at the shoreline. The gaps between segmented structures allow some wave energy to reach the shoreline, but this is dissipated by refraction and diffraction. Erosion may continue in the lee of the gaps leading to formation of an embayed shoreline as sand moves into the shelter of the structures.
The breakwaters are either constructed some distance away from the coast or built with one end linked to the coastline.
When oncoming waves hit these breakwaters, their erosive power is absorbed and disapated around the breakwater.

If the salient is stable, the beach may grow as sediment is 'trapped'. However, as a result nearby unprotected sections of the beaches will not receive these fresh supplies of sediments and may gradually shrink due to erosion, namely longshore drift.
As breakwaters can have a such a strong influence on longshore drift they are generally not normally used on long expanses of open coast or within estuaries if strong wave or tidally induced currents are present.
In 1994 a breakwater was constructed as part of a coast defence scheme at Sidmouth in Devon. Sidmouth is a popular holiday destination which depends on it shingle beach for both protection from storms and as an am entity for tourists.

The best form of natural defence is a beach which efficiently absorbs the energy of the waves. However, along many coasts longshore drift causes the beach to thin out in places and erosion of the land behind becomes a problem.

Groynes are regularly used as part of sediment control systems, designed to slow down longshore drift and build up the beach.

As a result beach material builds up on the updrift side, where littoral drift is predominantly in one direction, creating a wider and a more plentiful beach, therefore enhancing the protection for the coast because the sand material filters and absorbs the wave energy. However, there is a corresponding loss of beach material on the downdrift side, requiring that another groyne to be built there.

However, groynes do not protect the beach against storm-driven waves and if placed too close together will create currents, which will carry sand material offshore.

Traditionally they were constructed from tropical hardwoods which are more resistant to marine borers and erosion. However rock groynes have been introduced at a number of sites since the 1980s. Considerable investment has been made at sites incorporating groynes and beach recharge simultaneously.
Groynes are increasingly viewed as detrimental to the aesthetics of the coastline, and face strong opposition in many coastal communities.
In some areas a problem called Terminal Groyne Syndrome can occur. This is where the last groyne that has been built or the terminal groyne, prevents longshore drift from bringing material to other areas along the coast, effectively moving the problem further along the shoreline.

A study from the British Geological Survey in 2011 suggested just that the new rock groynes have simply displaced the power of waves and tide.

Natural landslide mechanisms in the cliffs adjacent to Sidmouth include rock-block and toppling failures induced by marine undercutting, and hydraulic stoping along faults and major joints at the foot of the cliffs. The principal landslide mechanism is the collapse of unconsolidated Head deposits and deeply weathered mudstones in the highest (mostly 3 to 5 m) part of the cliff. The falling material commonly destabilises the underlying well-jointed sandstones and mudstones.

Artificial factors that have influenced erosion rates in the cliffs east of the River Sid outfall in the last 100 years have included the refraction of waves adjacent to the end of the river wall, and interference with the easterly longshore drift of the beach gravels.

A letter to the Herald a year ago drew attention to further professional study:

Sunday, February 24, 2013
SIR - David McCluskey (Opinion, February 15) is correct in stating that coastal erosion is driven by marine action and protection of the base of Sidmouth’s east cliffs is the only way to mitigate the increased erosion of the past 15 years.
He is also right in stating that I blame the breakwaters for the increased rate of erosion.
In this I am supported by the Shoreline Management Plan, written by Halcrow, an eminent firm of engineers, and published by the Environment Agency. The mechanism is very simple.

The breakwaters have stopped all longshore drift of shingle from the west, thus denuding the base of the cliffs, which before 1995 was protected by a shingle bank five metres high and is now bedrock.
This shingle protected the base of the cliffs from undercutting by the sea, which now has unfettered access to cause the mayhem we have recently witnessed.